Molecular imaging can be beneficial as an adjunct to ultrasound and mammography.

Findings from a multicenter clinical study have indicated that breast-specific gamma imaging (BSGI) may significantly improve breast cancer detection. The analysis was conducted by radiologists at the Bradley Memorial Hospital (New Britain, CT, USA), and recently published in the American Journal of Roentgenology.

BSGI is a molecular imaging technique that allows clinicians to image the metabolic activity of breast lesions through radiotracer uptake. After the patient is injected with the agent, cancerous cells in the breast, along with all other cells in the body, absorb the tracer. Cancerous cells have an increased rate of metabolic activity, and consequently will absorb a greater amount than normal healthy cells. The lesions typically appear as dark spots on the BSGI image.

Figure 1: A 48-year-old woman with maternal breast cancer. (A) Mammogram, (B) ultrasound and (C) breast-specific gamma image. Cancer was indeterminate in ultrasound, and a mass is clearly detectable in (C). Images courtesy of Jean Weigert (Mandell and Blau, New Britain, CT, USA).

The study examined at 1042 patients who had been recommended BSGI owing to at least two of the following indications: equivocal or negative mammogram or sonogram and an unresolved clinical concern; personal history of breast cancer or current cancer diagnosis; palpable masses negative on mammographic and sonographic examination; radiodense breast tissue; or if they were at high risk for breast cancer.

In patients with negative or indeterminate mammographic findings, it was found that BSGI significantly contributed to the detection of malignant or high-risk lesions. The molecular imaging technique also provided improved management when compared with ultrasound.

Co-author Jean Weigert (Mandell and Blau, New Britain, CT, USA) tells Imaging in Medicine, “Our results demonstrate that in cases where mammography and ultrasound are negative or indeterminate, BSGI can still detect some cancers.”

Ultrasound is often a favored imaging procedure owing to the fact that it does not involve any radiation, and a concern about the wider clinical usage of BSGI would be the risk of radiation exposure. Weigart clarifies that “The primary advantage of ultrasound is that it does not use radiation, however, a negative ultrasound can still miss cancers … The BSGI study does involve low-doses of radiation, but the benefit of early cancer detection dwarfs the health risk from the radiation dose. In fact, there has never been a reported health impact from such low radiation doses and the benefit is evident in our data. Even according to the most conservative risk-models, the benefit outweighs the risk 680 to one.”

Could CT angiography be a new method to predict recurrent stroke?

Researchers at the Hotchkiss Brain Institute (University of Calgary, Canada) have conducted new research indicating that CT/CT angiography (CTA) may be a clinically viable tool to predict recurrent stroke in patients after transient ischemic attack and minor stroke. The work, lead by Stroke Neurologist Shelagh Coutts, was recently published in the journal Stroke.

MRI is already known to be suitable for identifying patients at high risk of recurrent stroke. The issue with using MRI, as with many stroke diagnostics and treatments, is that it is not generally possible within the short time frame that would be required when a patient is vulnerable to suffering a more severe stroke. This warrants investigation into the predictive accuracy of more readily available imaging modalities.

“...physicians should always use whichever technique is more quickly available at their institution.”

The study looked at 510 patients who had been admitted with consecutive transient ischemic attack and minor stroke. The individuals underwent CT/CTA and subsequent MRI, and were assessed for risk of recurrent stroke within 90 days using standard clinical variables and predefined abnormalities.

It was concluded that early assessment of the intracranial and extracranial vasculature using CT/CTA predicts recurrent stroke and clinical outcome in patients with transient ischemic attack and minor stroke. Coutts and colleagues advise that physicians should always use whichever technique is more quickly available at their institution.

“The fact that CT/CTA has a similar diagnostic accuracy in predicting recurrent stroke allows physicians to have more options for urgent assessment in these patients.”

Coutts explains the significance of this study to Imaging in Medicine, “This work is important as CT is the work horse of emergency department imaging. In many institutions MRI is not available as an emergency, but CT/CTA is. The fact that CT/CTA has a similar diagnostic accuracy in predicting recurrent stroke allows physicians to have more options for urgent assessment in these patients. Acutely imaging blood vessels makes sense as preventing a second stroke is all about figuring out why it happened in the first place.” Figure 2: Sagittal reformat of a CT angiogram. This was from a previously healthy 32-year-old male who had transient tinnitus in his right ear, then 10 min of right-sided weakness. Neurological examination was normal. The white arrow shows an intraluminal thrombus in the distal basilar artery. Diffusion-weighted MRI was negative for any ischemia. The patient was treated with intravenous heparins and the clot dissolved on follow-up imaging with no after effects. Image courtesy of Shelagh Coutts (University of Calgary, Canada).

CT angiography is effective as a gatekeeper prior to invasive angiography

Kavitha Chinnaiyan, first author of the study, explained that “The issue of overutilization of cardiac imaging is a growing one that has resulted in multiple societies collaborating to formulate appropriate use guidelines. We know from previously published data from the National Cardiovascular Data Registry that invasive angiography across the nation results in a diagnostic yield of <40% in terms of obstructive disease, pointing once again to appropriate use and, more importantly, appropriate patient selection for the catheterization laboratory.”

The group hypothesized that coronary CTA, an anatomic test, could be ideal as a “gatekeeper” to the catheterization laboratory. Their study included data from academic centers, community hospitals, free-standing imaging centers and private physician offices, across multiple specialties. All of the 6198 patients involved had been referred for CTA within 3 months of a stress test, and the team studied how well certain factors, such as stress test results and symptoms, corresponded with obstructive CAD, defined as 50% stenosis or greater. The cohort included those with symptoms suggesting ischemia (82.6%) and those with cardiac risk factors (17.4%). Of these, 58.5% had abnormal stress tests.

On CTA testing, it was reported that 18.7% of the patients had obstructive CAD, with a correlation between CTA and angiographic findings in the 621 patients who underwent invasive angiography. Stress test results did not independently predict obstructive CAD on CTA. The team also found that even among patients with normal stress tests, 34% had nonobstructive disease, while 15% had obstructive disease. “This suggests that these patients may not have been identified to have coronary disease without an anatomical test and that coronary CTA provides incremental information to aid in further risk stratification and optimal therapy,” Chinnaiyan noted.

Chinnaiyan believes that “Our results indicate that indeed, coronary CTA is well suited to perform a gatekeeper function, particularly in patients who need adjudication of their stress test results.”

A team of UCLA scientists have demonstrated the efficacy of a PET brain scan technique in predicting cognitive decline over a 2âyear period. The results of this longitudinal follow-up study were recently published in the Archives of Neurology.

Cognitive decline is strongly associated with aging, with 10% of those over the age of 65 years being diagnosed with dementia, and nearly 20% of the same age group suffering from mild cognitive impairment (MCI).

Alzheimer’s disease (AD) is associated with a build-up of amyloid plaques and tangle deposits, the latter correlating more strongly with AD progression, according to autopsy findings. Viewing these pathological changes through PET brain scans provides a ‘window into the brain’ to elucidate the progress of this degenerative disease. The team used a chemical marker, known as FDDNP, which binds to these abnormal proteins, particularly neurofibrillary tangles. Locating the early accumulation of these deposits provides insights into disease pathology.

The researchers performed brain scans and cognitive assessments at the start of the study and again after 2 years on the 43 enrolled participants, who had an average age of 64 years and 21 of whom had MCI.

“We are finding that this may be a useful neuroimaging marker that can detect changes early, before symptoms appear, and it may be helpful in tracking changes in the brain over time,” clarified study author Gary Small, Parlow-Solomon Professor on Aging and Professor of Psychiatry at UCLA. The significance of this study lies in the fact that “at this earlier stage, when clinical symptoms are not present, therapeutic interventions have the highest probability of success,” explains Jorge Barrio, Professor of Molecular and Medical Pharmacology at the David Geffen School of Medicine at UCLA (CA, USA).

For all subjects at 2âyear follow-up, increases in FDDNP binding in certain brain regions (e.g., the frontal and posterior cingulate) that are responsible for decision making, memory and emotional processing, correlated with the progression of cognitive decline.

Those subjects with higher levels of binding at baseline were found to demonstrate a decline in certain cognitive functions, such as language, attention and visuospatial abilities at follow-up. In the normal aging group, three subjects developed MCI during the study. Two of these had the group’s highest values of binding in these brain regions at baseline. In addition, in the subjects with MCI, levels of initial binding in the frontal and parietal brain regions were an accurate predictor of AD development after 2 years. Six of the 21 MCI subjects were diagnosed with AD at the study end. These subjects exhibited higher levels of baseline binding than others in their group.

“Up to this point we did not have reliable predictors of cognitive decline, and FDDNP scans, particularly for individuals at risk or with a family history, would be helpful,” explains Barrio. He continued, “Identifying these subjects would be very valuable for preventive treatments, hopefully substantially reducing the possible incidence of Alzheimer’s disease and also reducing the healthcare burden to society with a disease already affecting millions of people.”

Researchers at the Centre for Evidence- Based Imaging at Harvard Medical School, MA, USA, have revealed high rates of repeat abdominal imaging examinations at a tertiary institution and identified associated factors.

“Unfortunately, current follow-up imaging recommendations are often not evidence-based, which may result in the overuse, underuse and misuse of further medical imaging services.“

Reducing unnecessary repeat imaging examinations is important in medicine to reduce costs and avoid overexposure to patients. With this in mind, the researchers retrospectively analyzed all diagnostic abdominal CT, MRI, ultrasound, fluoroscopy and radiographs performed at their institution between 2000 and 2009. The primary outcome measure was repeat imaging examinations, and logistic regressions were fitted to determine the effect of patient age, sex, study modality, care setting, follow-up recommendations, and history of neoplasm on the primary outcome over time. 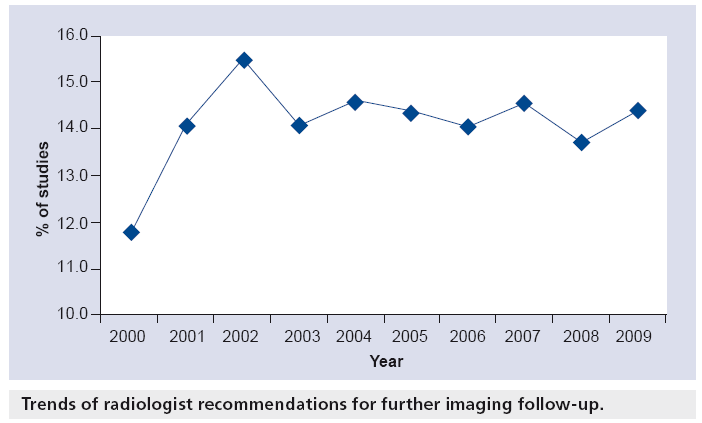 Authors of the study Ivan Ip tells Imaging in Medicine that “Among the contributing factors that were identified in our study to be associated with higher rate of repeat imaging, the two modifiable factors are 1) initial study modality and 2) radiologist’s recommendations.”

Ip continues, “Unfortunately, current follow-up imaging recommendations are often not evidence-based, which may result in the overuse, underuse and misuse of further medical imaging services. For example, it has been noted that significant variation exists in the rate of recommendation for further imaging studies by radiologists, even after controlling for key explanatory variables, in patients with focal cystic pancreatic lesions. Many such recommendations do not adhere to existing clinical guidelines.”

Ip recommends that “Radiologists, as the recognized imaging experts, must work together with referring providers to help ensure that the right imaging studies are performed at the right time, thereby reducing the need for follow-up studies.”