Lots of researches are made to identify a biomarker, which alone or in combination with other conventional markers could be useful for diagnosis and monitoring of RA [3]. The 70 kDa heat shock protein (HSP70) resembles one of these markers. It is released from damaged cells after stress and has been found in the bloodstream of patients suffering from autoimmune diseases [4] including RA [5,6]. Furthermore, HSP70 could alter immune cells activity through changes in secretion of inflammatory cytokines such as tumor necrosis alpha (TNF-alpha) and interleukin-10 (IL-10), hence protecting joints from progressive destruction [7].

YKL-40, another potential biomarker of inflammatory processes, is a chitinase-like protein that binds chitin with no chitinase activity. The protein was named YKL-40 based on its three N-terminal amino acids tyrosine (Y), lysine (K) and leucine (L), and its molecular mass of 40 kDa [8].

Several studies indicate that secretion levels of YKL-40 are elevated in patients with diseases characterized by inflammation, increased extracellular remodeling and ongoing fibrosis [9] such as cancer [10], coronary artery disease [11], heart failure [12], ischemic cerebrovascular disease [13], diabetes [14], asthma [15], Chronic Obstructive Pulmonary Disease (COPD) [16], pneumonia [17], sepsis [18], osteoarthritis [19] and RA [20,21]. However, there is still a paucity of studies about the potential diagnostic and prognostic role of HSP70 and YKL-40 in RA.

The aim of our study was to investigate whether HSP70 and YKL-40 might be useful biomarkers for diagnosis and monitoring of disease activity in RA.

Patients with acute or chronic renal failure, glomerulonephritis, congestive heart failure, acute infections, pregnancy, thyroid disorders, bronchial asthma, diabetes and those admitted to hospital during the last 3 months were excluded from this study. None of the studied women were on hormonal therapy.

The age-matched control sera were obtained from 60 healthy persons; 14 men and 26 women with a mean age of 36.78 ± 12.47 years. None of them were taking any medicine and none had any signs or clinical symptoms of cancer, joint or liver disease.

The study protocol was approved by the local ethics committee of Al-Azhar University, and all patients gave an informed consent.

Complete history taking including general and demographic data as age, sex, age of disease onset and disease duration were recorded. General and local examination including total number of swollen joints, joints with tenderness and extra-articular involvement were recorded. Disease activity score (DAS-28) was adopted for assessment of disease activity [23]. Drug history of patients also was recorded.

Blood samples were collected from patients and controls (five milliliters of venous blood) using a 22G disposable syringe under aseptic technique. These specimens were divided to three aliquots: First aliquot; 1.6 ml of blood was added to a tube containing 0.4 sodium citrate for ESR measurement by Westergren method. Second aliquot; about 1.5 ml of blood was added to a tube containing k3EDTA for CBC measurement on automated cell counter Drew system (Erba® Diagnostics INC, USA). For the third aliquot, the remaining part of specimen was placed in a sterile plane tube and allowed to clot, and then serum was separated by centrifugation at 2500 rpm for 15 min. The sera were stored at -10°C until used for the following tests:

Statistical analysis was performed using the Statistical Package for the Social Sciences (SPSS) version 20.0 (IBM, Chicago, IL). Data are presented as mean ± SD, or numbers as appropriate. Parametric values were analyzed using the student’s t-test. Non-parametric values were studied using the Chi-square test or Fisher’s exact test. Mann-Whitney test was used for unpaired differences. Correlations between the different parameters were calculated by the Spearman test and p values of 0.05 were considered significant.

Baseline characteristics of healthy controls and patients with rheumatoid arthritis are summarized in Table 1. Patients were more likely to have a higher average of conventional markers, Anti-CCP, HSP70 and YKL-40 levels than the control group with p<0.01. 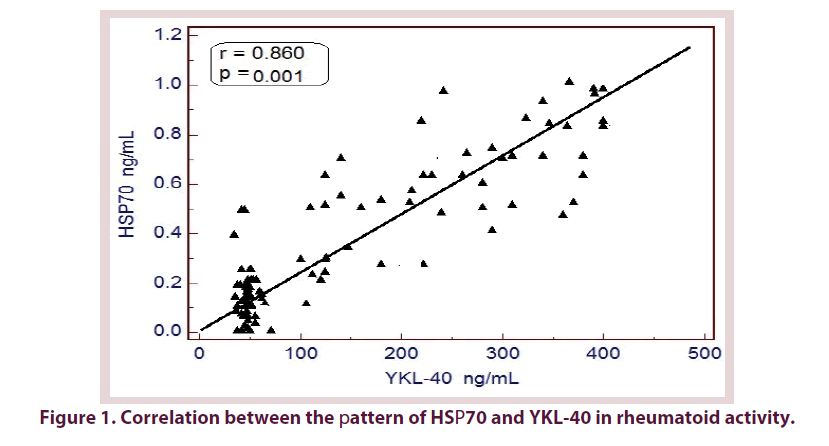 Figure 1. Correlation between the pattern of HSP70 and YKL-40 in rheumatoid activity.

Regarding the treatment, all patients were on methotrexate or leflunamide as disease modifying anti-rheumatic drugs in addition to hydrocxychloroquine and low dose prednisolone. No one of our patients was receiving biologic treatment.

Chronic active inflammation of the rheumatoid joint often leads to irreversible destruction of articular cartilage and subchondral bone. Measurements of acute-phase reactants as ESR and CRP are considered to be suitable biochemical markers for long-term monitoring of disease activity in RA. However, differences exist between clinical disease activity and the level of these markers [20].

Measurement of RF is not specific for diagnosis of RA and it can be found in other autoimmune diseases, non-autoimmune conditions and in 3-5% of the healthy population [24].

In our study, ESR, CRP, RF and Anti-CCP markers were higher in patients with severe RA compared to other groups of disease activity. These markers also found to be higher in patients with remission state compared to healthy control group. These results were in agreement with Serdaroğlu et al. [25] and Vanichapuntu et al. [26] studies. They found that none of these markers have definitely allowed for accurate monitoring of RA activity.

The emergence of the Anti-CCP Antibody assay, as a new serological marker for RA, helped in earlier diagnosis and changed treatment decisions of RA [27]. Anti-CCP test in conjunction with RF gives a more reliable early diagnosis of RA and found to have a prognostic value. Moreover, this biomarker was reported to be correlated with radiographic damage in RA [28].

In agreement with our results, Hayem et al. [29] showed increased concentration of HSP70 in patients with RA, which was correlated with RA activity. This is contrary to a study done by Sedlackova et al. [6] showed insignificant difference in serum HSP70 levels in patients with RA compared to control subjects. However, the participants in their study were only RFpositive; while in our study both RF-positive and RF-negative patients were enrolled.

We observed that serum HSP70 levels are elevated in patients with RA and could be used as a diagnostic test for RA. Increased serum levels of HSP70 in patients with RA were independent of serum RF and anti-CCP status. ROC curve analysis revealed that HSP70 is less specific and less sensitive than anti-CCP. Nevertheless, it tends to be a specific test, rather than being a sensitive one for diagnosis of RA.

On the other hand, we demonstrated significant increase in YKL-40 serum levels in patients with high RA activity compared to those in remission, or those with low/moderate RA activity. Interestingly, patients in remission still had significant higher serum YKL-40 levels compared to control subjects. These results support the relative specificity of YKL40 in distinguishing high disease activity from other severity grades and patients in remission from healthy subjects.

In this study, serum YKL-40 levels were influenced by the disease activity as evaluated by DAS-28. There was a statistically significant increase in serum YKL-40 in active RA patients in comparison to inactive patients. This finding coincided with Johansen et al. [34] and Kassem et al. [20] who confirmed that serum YKL-40 was increased in patients with active disease. Also, Syversen et al. [33] found an association between YKL-40 and DAS28 in their RA patients.

In our study, a statistically significant correlation was found between serum YKL- 40 and clinical parameters and disease activity markers. This consistent with Volck et al. [35] who also found significant correlation between serum and synovial fluid concentrations of YKL- 40 in RA patients with ESR and CRP. The same was reported by Johansen et al. [34], Vos et al. [30] and Matsumoto & Tsurumoto [36]. In another study, Johansen et al. [37] stated that approximately 70% of their RA patients with elevated serum YKL-40 had also high ESR or serum CRP indicating that ESR, serum CRP and YKL-40 levels reflect inflammation of RA patients, differently. Also, Syversen et al. [33] stated that YKL-40 is a marker of joint inflammation in RA.

We suppose that YKL-40 could provide a different and a more local view of the inflammatory process than conventional biomarkers such as ESR, CRP and RF. The explanation may lie in the fact that YKL-40 is secreted by activated macrophages in the inflamed synovial membrane [38] or released by exocytosis from specific granules of neutrophils [39] and by articular chondrocytes [40]. Inspite of the treatment, 39 (65%) of our patients presented with active RA which indicates that they could be regarded as nonresponders to the applied therapy. A similar phenomenon was recorded by Knudsen et al. [41], Takahashi et al., [42] and Zyvanovic et al. [43].

The relationship between the concentration of HSP70 and YKL-40 levels with conventional parameters and DAS28 score of disease activity indicates that both markers are associated with progression of inflammatory processes.

All authors declare no conflicts of interest.

Informed consent was obtained from all individual participants included in the study.