A large database of 1773 HCC patients in Turkey was examined. 41.9% had alpha-fetoprotein (AFP) levels <20 IU/ml and an additional 16.123% had values between 20-100 IU/ml. This 58% of the cohort (<100 IU/ml AFP levels) was examined in detail. 66% of patients with small (<5 cm) HCCs had low AFP, compared to 49% of patients with larger (>5 cm) HCCs. The mean diameter (MTD) of larger MTD, low AFP tumors was 8.4cm. Therefore, factors other than AFP must contribute to HCC tumor growth. Larger tumors in low AFP patients had both higher platelet levels and increased PVT percent. Linear regression analysis for both MTD and multifocality showed that platelet numbers and presence of PVT were significant variables; whereas for PVT, significant variables were albumin, alkaline phosphatase and MTD. Comparisons between patients with AFP levels <20, 20-<100, 100-<1000 and >1000 IU/ml showed the most significant tumor finding was an increase in PVT percent between each group, and to a lesser extent, MTD. Thus, low- or normal-AFP HCCs constitute the majority of patients and have slightly lower MTD and much lower PVT percent than HCCs associated with elevated blood AFP levels. New, non-AFP markers are thus needed, especially for small HCCs

Alpha-fetoprotein (AFP) was first described in 1953 as a fetal form of albumin and as a marker for HCC [1-3], which opened up the relationship between oncogenesis and embryogenesis. Since then, it has become the best-described and most used marker in HCC. It has been recognized for its usefulness in prognosis [4-7], its relationship to various indices of HCC human biology [6,8,9], its use in non-biopsy HCC diagnosis [10,11], in assessment of responses to therapy [12] and more controversially, as a screening tool together with abdominal ultrasound in patients with hepatitis or cirrhosis who are known to be at risk for HCC development [13,14]. However, not all HCC tumors are AFP positive or secrete elevated amounts of AFP into the serum [15-26]. In the present study, we examined a large cohort of Turkish HCC patients, stratified by AFP status, with particular reference to the low AFP patients and examined their characteristics. We found that their tumors were smaller than those with elevated AFP levels and were much less aggressive, as judged by percent patients with PVT. Nevertheless, low AFP HCC patients also produced large size HCCs, suggesting the presence of factors other than AFP in the determination of HCC size.

We analyzed a database of 1773 prospectively-accrued HCC patients who had full baseline tumor parameter data, including CT scan information on HCC size, number of tumor nodules and presence or absence of PVT and plasma AFP levels; complete blood count; routine blood liver function tests, (total bilirubin, GGTP, ALKP, albumin, transaminases) and patient demographics. Diagnosis was made either via tumor biopsy or according to international guidelines [6,7]. Of these patients, 1029 had low AFP levels (<100 IU/ml) and are the subject of this study. Database management conformed to legislation on privacy and this study conforms to the ethical guidelines of the Declaration of Helsinki and approval for this retrospective study on deidentified HCC patients was obtained by the Institutional Review Board.

Mean and SD for continuous variables, and relative frequency for categorical variables, were used as indices of centrality and dispersion of the distribution. For categorical variables, the Chi square and z test for proportions were used; the Wilcoxon rank-sum (Mann-Whitney) test was to test the difference between two categories, and the Kruskal-Wallis rank test to test the difference among categories.

All final multiple linear or logistic regression models was obtained with the backward stepwise method and the variables that showed associations with p<0.10 were left in the models.

When testing the null hypothesis of no association, the probability level of < error, two tailed, was 0.05.

When the clinical characteristics of the 4 AFP groups were examined, significant differences emerged. Examination of tumor size (MTD) across the 4 AFP groups revealed no change between the lowest 2 groups, and then significant MTD increase with subsequent increase in group. Similar results were found for tumor multifocality. However, PVT increased significantly with each increase in AFP group. This was also true between the 2 low AFP groups, despite their have similar MTDs. There were significant increases in the trends for total bilirubin, GGTP, ALKP and decrease in albumin, but they were not individually significant when all 4 groups were compared with each other.

For the remainder of the analysis, the 2 lowest AFP groups were combined as ‘low AFP’ i.e. ≤ 100 IU/ml, as the tumor sizes were similar for these 2 lowest AFP groups. Small (<5cm MTD) and large (>5cm MTD) tumors were then separately dichotomized according to AFP levels (TABLE 2). There were 750 patients in the small MTD group, and of these, 501 or 66.80% of the patients had low AFP. The low AFP subgroup with <5cm tumors had smaller tumors and significantly less PVT % (less than half ) than patients with smaller tumors and higher AFP, and they also had significantly lower mean values for platelets, total bilirubin, GGTP and ALKP and higher albumin values, than for patients with <5 cm tumors and higher AFP>100. The >5 cm MTD group had 385 or 48.92% in the low AFP subgroup. Parallel differences were found for the larger tumors with respect to MTD and PVT %, as well as for tumor multifocality, as well as for platelets and GGTP levels, but ALKP and bilirubin levels were not significantly different when low and higher AFP subgroups were compared for the >5 cm MTD patients. For the larger MTD patients, 30.92% had PVT, despite being in the low AFP subgroup (compared to 9.36% with PVT in the low AFP small tumor group). The larger MTD patients with low AFP had a mean MTD of 8.43 cm, compared to 2.91 cm in the small MTD tumor group with low AFP, a 2.9- fold increase in size, despite both tumor groups having low AFP levels. Thus, factors other than AFP likely also contribute to HCC size increase.

Comparison of small and large low AFP patients (TABLE 2) showed that in addition to the size differences, there were significantly more percent PVT in the patients with larger than with smaller tumors (9.36% versus 30.92%, p,0.0001), without differences in either AFP or bilirubin mean values.

Relationships of platelets, albumin, GGTP and ALKP to HCC parameters

Three of the most important and objectively measurable indices of HCC aggressiveness include: tumor size (MTD), multifocality and presence of PVT. The regression models were therefore constructed for each of these 3 parameters are shown in TABLE 3, and the significant variables are shown in TABLE 3A-3C. In a final model for MTD, platelets and PVT was significant (TABLE 3A1). The same was also found for tumor multifocality (TABLE 3C1). However, for PVT, the significant variables in the final model were ALKP, albumin and MTD (TABLE 3B1). The relationship showing an increase in PVT in larger size tumors is shown in the FIGURE 1 box plot. 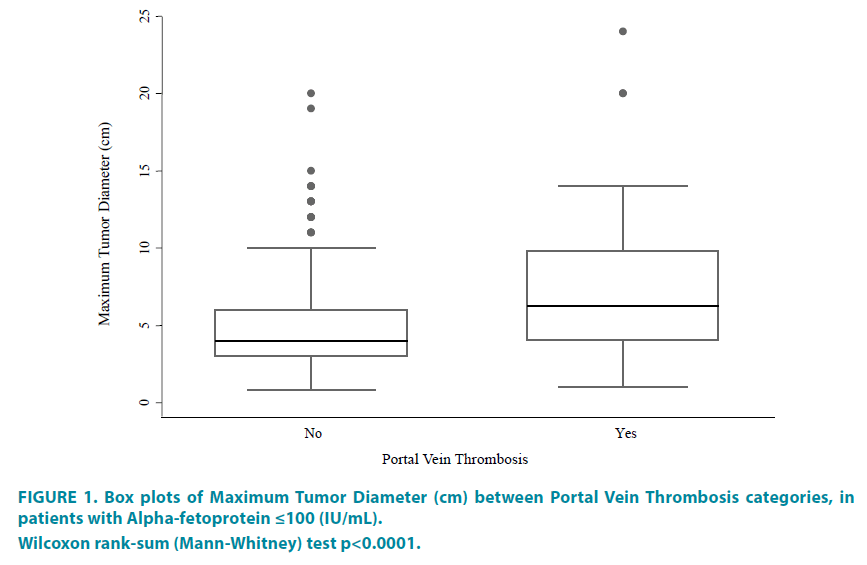 Small (<5 cm) and larger (>5 cm) MTD tumor groups were then compared, after dichotomization for the significant blood parameter variables shown in TABLE 3. The relationship of platelets to MTD is shown in TABLE 4. A significant effect of platelet dichotomization was found for MTD and PVT, but only in the larger tumors (>5 cm). In that group, the mean MTD was 3.72 cm in the thrombocytopenia subgroup, compared to 8.78 cm in the normal platelet subgroup. The relationship between blood platelet levels and MTD is also depicted in FIGURE 2, in which an increase in tumor size was found to be associated with a significant increase in mean platelet values, as reported in other analyses [27,28]. 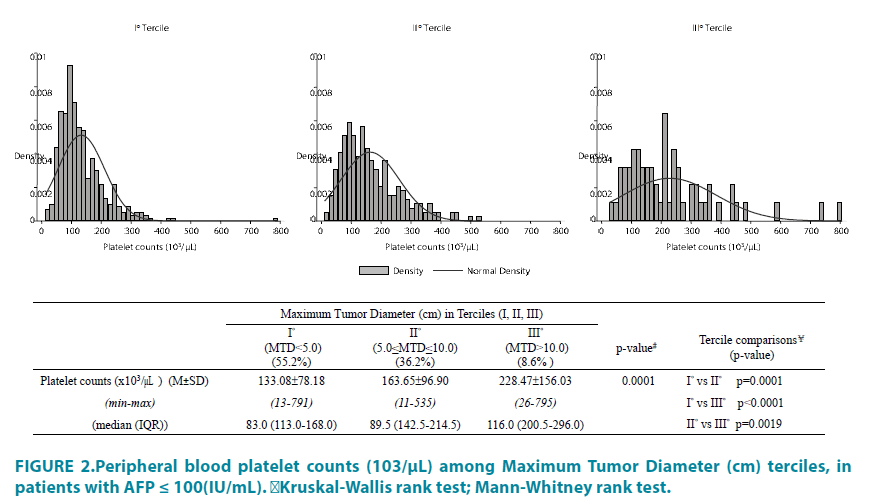 An examination of blood albumin levels in relation to MTD (TABLE 5) showed that albumin appeared to have a significant protective effect on MTD in larger tumors, and a lesser protective effect on large tumor PVT and multifocality. Dichotomization according to blood GGTP values (TABLE 6) also showed a significant effect for MTD and PVT, but only in larger (≥ 5 cm) MTD patients. In this subgroup of larger tumors with higher GGTP levels, there were also significantly higher platelet counts and ALKP levels, and significantly lower albumin levels. A similar dichotomization using ALKP values however, showed no difference in MTD, PVT or multifocality (data not shown).

There are several noteworthy findings from this analysis. Amongst them are the high (42% or 58%, depending on AFP cutoff) of negative or low AFP HCC patients (TABLE 1). This has been found in several different reports [15-21]. It is thus unsurprising that AFP has been a poor screening tool, especially for small size HCCs. In addition, we found that large HCCs also occurred in absent or low range AFP patients (TABLE 2). Thus, factors other than AFP, such as cell growth and inflammatory cytokines must be postulated to be important in the growth of large size HCCs. Another finding was the high percent (19-50%) of patients with PVT, even in the lowest AFP group (19%). As AFP level group and thus MTD increased, so did GGTP mean values and to a lesser extent, ALKP. GGTP has been found to be a useful tumor marker by others, especially in low AFP HCCs [21,29,30-33] and so, to a lesser extent has ALKP [34]. Platelets were found to be associated with an increase in MTD, especially for the larger size tumors, but there was an association between MTD and platelet numbers (TABLE 4 and FIGURE 2), as noted elsewhere [27,28] and there was a greater percent of PVT in the larger tumors (TABLES 2, 4 and FIGURE 1). The reason for this is unclear. Whether it is that tumors beyond a certain diameter have a larger number of invasive (? stem) cells, or whether the growth and inflammatory factors that produce larger tumors also produce more PVT, has not been closely explored, to our knowledge. However, consistent with these ideas, lower albumin, which is associated with increased systemic inflammation in the Glasgow Index [35,36], is also associated with larger MTD and increased PVT (TABLE 5), although with statistical significance only for the larger tumors.

Furthermore, a weakness in this study is that survival data was not available from this newlyformed collaborative group.

Various markers have been suggested for low- or normal-AFP HCCs. These include, but are not limited to: DCP [37,38], Glypican-3 [39], fucosylated serum paraoxonase 1 [40] and alpha-1 acid glycoprotein [41], TEMs [42], Dickkopf-1 [43] and EpCam stained circulating tumor cells [44] and staining of HCCs [45], C-reactive protein [46], alpha-L-fucosidase [47] and hepatic miRs [48]. With such a high percent of small and large HCCs having low AFP levels, novel biomarkers are clearly needed. Much effort has recently focused on combinations of markers, such as AFP plus AFP-L3 plus DCP for use in surveillance [49]. Even in patients with very low AFP (<20 ng/ml), sensitivity was over 65% using these 3 marker combinations [50,51]. However, the different clinical HCC phenotypes for these marker combinations has not been explored in detail, except for the association of increased incidence of PVT in patients with high DCP levels [52].

The authors declare no conflict of interest. All authors have read and agree with this paper.