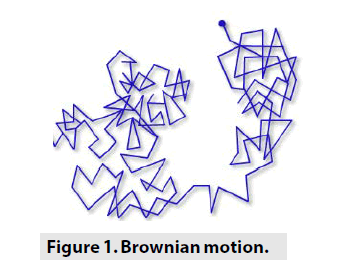 Apparent diffusion coefficient (ADC) is a measure of the magnitude of water molecule diffusion within tissue. This assessment can be investigated utilizing dissimilar b-values through modifying gradient amplitude commonly b-values of 0 and 1000 s/mm2. ADC is obtained automatically by the software and then manifested like a parametric map that demonstrates the level of different tissues’ molecule water diffusion. Tissue ADC is introduced in units of mm2/s [3-6].DWI is specifically effective in characterizing tumor (Figure 2) and assessing brain infarction (Figure 3).

Denis Le Bihan first used the term IVIM to demonstrate the microscopic translational movement of water molecules within a voxel [7,8]. In IVIM model, biological tissue consists of 2 apparent compartments: tissues water molecule diffusion considered as true diffusion and microcirculation of blood in the capillary network regarded as perfusion. Hence, Denis Le Bihan introduced that water streaming in capillary intravoxel level imitate a haphazard movement considered as pseudo-diffusion. Likewise to water molecule’s diffusion, the effect of pseudo-diffusion on the signal alleviation Nonetheless, the level of signal alleviation caused by pseudo-diffusion is generally an order of magnitude larger than tissue’s molecular diffusion, therefore its respective addition to the DWI signal becomes important only at a very low b-value generally under b-value of 200 s/mm2, conceding diffusion and perfusion effects to be demarcated. In practice, IVIM was utilized to attain 4 parameters: F (perfusion fraction); D* (pseudodiffusion); D (real-diffusion), and ADC (Figure 4). IVIM is very useful in assessing tumor features and tumor responses to therapy [7-12].

Conventional DWI when assessing sophisticated structure generally produces not enough spatial resolution. In addition, conventional DWI is very sensitive to body movement and paramagnetic structure led to the geometrical distortion. So as to overcome this problematic condition, Z-DWI is a novel form of conventional DWI combined with high resolution even small field of view which can help clinician to investigate the lesions of sophisticated structure such as hippocampus, spinal cord or early stage of astrocytoma occurred in a small gyrus (Figure 5). Z-DWI is clinically indicated for epilepsy, characterization of hippocampus lesion, spinal cord lesion and assessment of brain tumor [13-15]. DTI is an expansion of DWI that permits data contouring depended on tissue tract specifically white-matter extent direction. The axon architecture in parallel bundles with outside myelin armor eases the water molecule’s diffusion along the same main direction (Figure 6) [16-19]. Fiber-tracking, also known as tractography, bases on the DTI to track fibers along their whole direction. Beginning from a region of interest, generally defined manually, the fiber-tracking algorithm looks forward to adjacent voxels whose main diffusion direction is in the continuity of the previous one. The most common tracked fiber bundle is the corticospinal tract. In addition, DTI also produces two parameters: ADC and fractional anisotropy (FA) also known as diffusion anisotropy (Figure 7). In practice, the application of DTI is for brain such as tract-specific localization of white matter lesions, localization of tumors in relation to the white matter tracts, localization of the main white matter tracts for neurosurgical planning and assessment of the white matter maturation; nevertheless, today DTI can be applied to some other organs such as kidney, uterus, muscle and heart[16-19]. DKI is an advanced method which is an extension of DTI by measuring the skewed distribution, also known as kurtosis of water diffusion relied upon a distribution function capability. The kurtosis is a common, dimensionless statistic for quantifying nongaussian motion based on the dissimilarity from a normal distribution and abnormal distribution [20,21]. It generates a high order diffusion of water distribution and analysis. Furthermore, DKI can quantify the diffusion restriction more accuracy than DTI (Figure 8). DKI protocols are different from DTI-protocols in utilizing at least 3 b-values in comparison with 2 b-values for DTI and at least 30 independent diffusion gradient directions in comparison with 6 for DTI. DTI protocols for brain need 0, 1000, 2000 s/mm2 b-values with diffusion extensions. Post-processing image necessitates the use of specialized algorithms. DKI is commonly used for assessing stroke and brain tumor. With the organs outside the brain, there are some previous studies manifested the efficacy of DKI [20,21].

Figure 8. DTI (left section) and DKI (right section) tractographies manifested on a normal brain are provided as an example to demonstrate the dissimilarity in sensitivity for the detection of tiny crossing fibers between DTI and DKI fiber-tracking techniques. Figure courtesy of Paydar et al. [18].

The DTI model revealed that there is an exclusive intravoxel direction of each fiber symbolized by the main eigenvector. However, it is concluded that in case of crossing fiber commonly representing the areas in which the fibers’ direction is not similar, i.e. when the fibers are interdigitating, caressing, curving, or bending each other, DTI is not valid (Figure 9) [22-24]. Recently, more robust models of the diffusion process have been proposed that focus to overcome the disadvantage of the DTI model. Among others, DSI is one of best solutions. DSI improves the accuracy in case of crossing fiber and also produces a high resolution and deep detail of fiber bundles in comparison with DTI (Figure 10) [22-24].

Figure 9. DTI (A) and DSI (B) images show the tractographies of crossing fiber bundles (white arrow).

The biggest benefit of DWI sequences is the value of quantitative parameters reflected the velocity of proton’s movement and the shape of proton’s motion inside the tissue. With the current innovative techniques, IVIM also reflects partially the perfusion feature of tissues [7,8]. In addition to DTI, DKI and DSI can improve the precise rate in investigating the nerve, muscle and even tissue bundles thereby reducing the false positive and negative of diagnosis [18-24].

To resolve the low temporal resolution, Z-DWI is essential to assess the sophisticated structure like small gyrus, hippocampus and prostate [13-15]. All of these techniques are free gadolinium exposure hence it can duplicate without possibility of kidney damage or gadolinium retention. These techniques are very helpful in children, older patients, renal impairment disease and patients with high risk of gadolinium allergy. Nonetheless, DWI techniques are launched better in the MRI of at least 1.5 Tesla with corresponding analysis softwares [4-6]. Furthermore, DSI is tended to be more excellent on MRI of at least 3 Tesla and DKI needs to be evaluated with mathlab correlative with bi-exponential, tri-exponential or complex model [22-24]. In terms of investigation on the physiological and biological features of tissue, innovative DWI techniques are more prosperous and rigorous than conventional DWI in manufacturing more information for managing confidential diagnosis, appropriate treatment and lesions' response to therapeutic methods.

Diffusion magnetic resonance imaging has dissimilar types which can facilitate and produce helpful information for clinicians to optimize diagnosis and treatment strategy. In addition to conventional DWI and DTI, new methods such as IVIM, Z-DWI, DKI and DSI are developed to improve the precision of diagnosis and therapeutic treatment strategies, which therefore should be investigated carefully.