A coronary artery anomaly is a congenital defect of one or more coronary arteries of the heart in terms of origin, number, course and termination of the artery. A 69 year old lady with angina on exertion admitted to our hospital after detection ischemia of inferior segment of the left ventricle on imaging. Coronary angiography showed an isolated single coronary artery with an aberrant right coronary artery originating from distal left circumflex artery. Here we would like to attract attention to coronary abnormalies by presenting this case.

A coronary artery anomaly (CAA) is a congenital defect of one or more coronary arteries of the heart in terms of origin, number, course and termination of the artery. The exact mechanism of CAA development is not elucidated yet. CAA is associated with some other congenital heart diseases like tetralogy of Fallot, transposition of great arteries and pulmonary valve atresia. Most CAA rest asymptomatic while some show up with dyspnea on exertion, syncope during strenuous exercise, fatigue and chest pain. Diagnosis could be made by conventional coronary angiography (CAG) or computerized tomography (CT) and magnetic resonance imaging (MRI). The incidence of CAA is about 0.3% to 1% in patients undergoing CAG [1].

A 67 year old lady applied to our outpatient clinic for increasing nature of chest pain on exercise. She had hypertension for 23 years and treated with candesartan plus hydrochlorothiazide and it was well controlled. There were no history of coronary artery disease, diabetes mellitus and hyperlipidemia. Physical examination showed normal heart sounds and there were no rales in both lung areas. She had a blood pressure of 131/65 mm Hg, a heart rate of 69 bpm, a temperature of 36.9°C and a respiratory rate of 13/min. Her electrocardiogram showed sinus rhythm without any pathology. An exercise stress test was performed according to Bruce protocol which was unable to show ischemia during exercise but angina at the 6th minute. Her angina was dissolved in three minutes after rest. Gated myocardial perfusion imaging (MPI) with technetium-99m (Tc-99m) showed preserved ejection fraction with moderate ischemia in inferior wall of left ventricle from mid-ventricle to the basal segments (FIGURE 1). Transthoracic echocardiography was unremarkable with 60% ejection fraction. Subsequently a CAG was performed. Surprisingly a SCA originating from left coronary cusp followed by normal course of left anterior descending artery (LAD) and a LCX which was continued as RCA was observed (FIGURE 2). Multiple attempts to show RCA from right coronary cusp and aortography failed to show any coronary artery originating from right coronary cusp (FIGURE 3). A mild slow flow of all the coronary artery tree was observed as contrast agent clearance was delayed (FIGURE 4). The case was accepted as an isolated SCA with anomalous origin of RCA from distal LCX. The patient was started acetylsalicylic acid 100 mg once daily and nebivolol 5 mg once daily. Her symptoms were relieved after initiation of beta-blocker and acetylsalicylic acid. 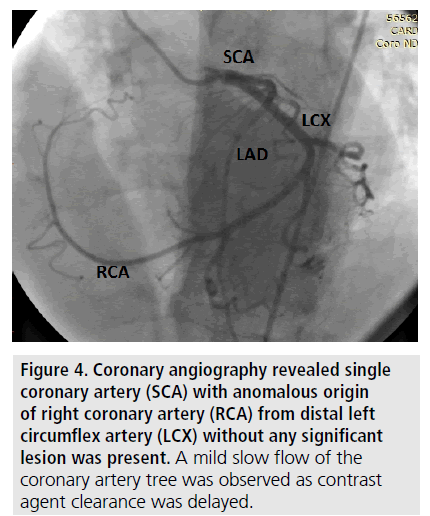 Coronary artery anomaly is rare to be found and an isolated SCA with an aberrant right coronary artery (RCA) originating from distal left circumflex (LCX) artery is exceptional. Lipton et al. have already suggested a classification for CAA and our case is harmonic with L1 which means a SCA arises from left coronary cusp and continues as LAD, LCX and distal LCX as accepted aberrant RCA because of mimicking anatomic and physiologic RCA [3].

Clinical presentation of SCA varies depending on concomitant other congenital anomalies, such as transposition of the great vessels, coronary arteriovenous fistula, bicuspid aortic valve [4] and coronary artery disease. Congestive heart failure, cardiomyopathy and cardiac ischemia could be one of the presentations of SCA [5]. Ischemia without significant coronary artery lesion which was attributed to simply presence of SCA could be seen up to15% [6].

However, it is already reported coexisting single coronary artery and atherosclerotic cardiovascular disease. Ma et al. presented a SCA with an aberrant RCA originating from distal LCX patient with acute inferior myocardial infarction (AMI). After successful percutaneous coronary intervention (PCI) blood flow was restored in this patient [7]. Another patient of SCA with a RCA originating middle portion of LAD presented with AMI and successfully treated with PCI was reported [8]. Vrolix et al. reported a patient of SCA with a RCA originating from distal LCX with a significant stenosis which has undergone coronary by-pass surgery successfully [9].

Our case had a chest pain on exertion and myocardial stress test showed ischemia in inferior segment of LV. Subsequent CAG showed L-1 SCA with a RCA originating from distal LCX. Here slow flow of all the coronary arteries was observed in CAG with diminished contrast washout. Absence of coronary collaterals, vasospasm and long travel distance of coronaries are the possible mechanism causing ischemia in SCA without a significant stenosis. Medical follow up was advised to the patient at first step with addition of acetylsalicylic acid and beta blocker to her medical treatment. As her symptoms were relieved, surgery was not an option. The patient was advised to avoid strenuous exercise. After one year follow up the patient was symptom free after beta blocker.