Results from a recent study have indicated that fatigue symptoms often experienced by people undergoing radiotherapy may be associated with an increase in inflammatory markers, suggesting that activation of the proinflammatory cytokine network is linked to fatigue during radiation therapy. The study was carried out at the University of California, Los Angeles (CA, USA) and led by Julie Bower, an Associate Professor at the Department of Psychology and Psychiatry. Bower comments, “This study suggests that exposure to radiation is releasing these inflammatory cytokines and that may be contributing to fatigue”. The study investigated possible reasons for symptoms of fatigue in patients undergoing radiation therapy for breast and prostate cancer.

Fatigue is a common side effect from radiotherapy, observed to commence early on in treatment and persist following treatment. Previous study has suggested that fatigue affects up to 80% of patients during radiotherapy and 30% at follow-up visits. However, the etiology of radiotherapyinduced fatigue is poorly understood. Some research has suggested that the level and time course of fatigue depends on the site of the tumor and treatment type.

The recent study aims to unearth a potential cause, with a corresponding tell-tale biomarker, for this observed fatigue. Bower and her colleagues were interested in the idea that inflammation may be the cause of fatigue in radiotherapy patients. They therefore put into action an observational study involving 28 patients with early-stage breast cancer and 20 patients with early-stage prostate cancer. All 48 participants completed questionnaires and serum levels of IL-1β and IL-6 were determined before, during and after a course of radiation therapy. Certain subjects also had blood samples taken to measure serum markers of proinflammatory cytokine activity, including IL-1 receptor antagonist and C-reactive protein.

Analysis of the questionnaires indicated that radiation treatment increased fatigue in the study participants, in concurrence with previous clinical observations and informal patient feedback. New information was also yielded: that serum levels of C-reactive protein and IL-1 receptor antagonists were positively associated with fatigue symptoms (p < 0.05). However, the other inflammatory markers measured, IL-1b and IL-6, were not associated with fatigue. Fatigue and inflammation are both complex quantities, with many contributing factors. Therefore, the researchers in this study also controlled the results for potential confounding factors, including, age, BMI, hormone therapy, depression and sleep disturbance.

Stephen Hahn, Chair of the Department of Radiation Oncology at the Abramson Cancer Center at the University of Pennsylvania (PA, USA), remarked, “Fatigue related to radiotherapy is very common but we do not have any good idea about why it occurs. This suggests one possible mechanism and suggests an avenue for treatment”.

The most significant finding (p < 0.001) was that recall rates were significantly higher with FFDM in both the initial and subsequent round. Another finding of note was that the detection of ductal carcinoma in situ was increased (p < 0.01) with FFDM.

Studies analyzing the use of FFDM and SFM are important as concerns have been raised that SFM is limited in its ability to detect some cancers, especially those occurring in women with radiographically ‘dense’ breasts.

“Digital mammography offers theoretical advantages compared with SFM for cancer detection, and this study provides evidence to suggest that this translates into clinical benefits…”

Digital mammography offers theoretical advantages compared with SFM for cancer detection, and this study provides evidence to suggest that this translates into clinical benefits. Despite the high potential of FFDM – it can provide better contrast and signal to noise ratios, which may allow better cancer detection – mammography has been slow to convert to digital technology as it requires particularly high resolution and contrast.

The recent study design involved replacing two of seven conventional mammography units with FFDM units at a screening center. The same team of radiologists interpreted the images from SFM (hard copy) and FFDM (soft-copy reading with CAD). A total of 367,600 examinations were performed; 56,518 of these were with FFDM. The study lasted for 5 years, when screening outcomes were assessed. Nico Karssemeijer, an Associate Professor of Radiology at Radboud University (Nijmegen, The Netherlands), and lead author of the study comments: “A strong point of the study is the fact the same group of radiologists was reading both film and digital in parallel during the whole study period”.

Even if, at this stage, FFDM provides no significantly improvement in cancer detection rate, its rapid image acquisition and ability to send the images electronically are significant advantages. However, a disadvantage is that FFDM is approximately 3–5-times the cost of SFM.

Ultrasound for the detection of ovarian malignancies

Aware of the high mortality rate of ovarian cancer, researchers have conducted a study into the use of ultrasound for the detection of abnormalities in the ovaries. The aim is to develop a method for the early detection of ovarian malignancies in order to reduce mortality.

In this study, the authors report how the prediction of ovarian malignancy with ultrasound compares with prediction from symptoms. They found that ultrasound detected malignancies better than symptoms analysis (sensitivity: 73.3 and 20%, respectively). However, symptoms analysis detected more benign tumors than ultrasound (specificity: 91.3 and 74.4%, respectively). Of the 31,748 women enrolled to have an annual transvaginal sonography (TVS) screening, 272 were selected to take part in the study.

Symptom and TVS results were compared with surgical pathological findings. The authors, from the University of Kentucky Chandler Medical Center and the Markey Cancer Center (Lexington, KY, USA), concluded that, “Symptoms did identify ovarian malignancies, but not as well as TVS”. The study also looked at the benefit of collaborating symptom results and ultrasound. The addition of ultrasound to symptom diagnosis was of most benefit in discriminating malignancy.

Image-based surgical planning proves a success in one heart operation

“The application of MRI in this situation...provides surgeons with a flexible approach to surgical planning…”

Clinicians have utilized MRI to build a virtual model of their patient’s heart, allowing the surgeon to try out various surgical approaches in a 3D simulation program prior to performing the operation. The strategy was hailed a success as the patient’s oxygen saturation levels increased from 72 to 94%. The 4-year-old female patient had Fontan physiology, having been born with only one functional ventricle. As for other patients with this defect, she was suffering from low oxygen levels in her tissues as o x y g e n - rich blood was mixing with oxygen-poor blood prior to being pumped to the lungs and body. The solution is to undergo open heart surgery to redirect the circulation. Fontan reconstruction had been performed on the girl; however, severe complications had developed. Surgeons needed to operate again to improve the hepatic circulation to enable liver hormones to remove abnormal blood vessel connections in the lung.

The objectives of the US scientists were to implement an image-based surgical planning protocol that would enable thorough investigation of pre-operative hemodynamics and allow surgeons to determine the best surgical procedure to carry out for that particular scenario. 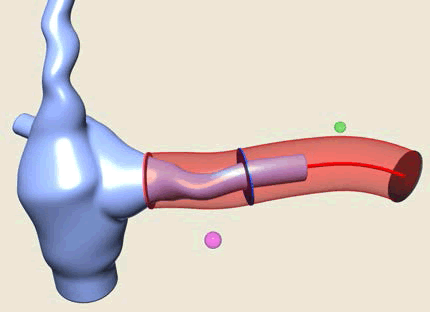 The first stage of the procedure is cardiac MRI for 3D anatomy and flow reconstruction. Following assessment of this model, it is imported into an interactive surgical planning interface, on which the surgeons perform a number of surgical scenarios. This gives the surgeons flexibility to consider which option is likely to give the best postsurgery outcome. 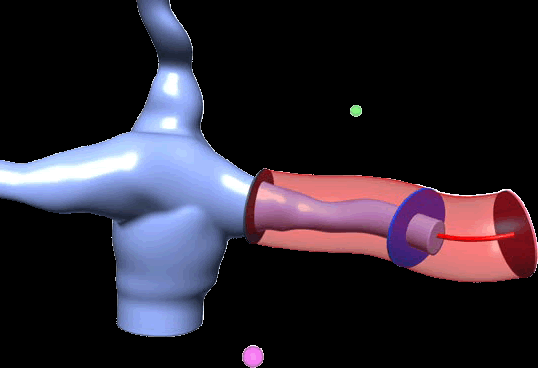 Predictions are based on a fully validated computational fluid dynamic solver. The likely best outcome must also be balanced with surgical feasibility to provide the optimal surgical option.

The application of MRI in this situation certainly provides surgeons with a flexible approach to surgical planning and the technology is applicable to any procedure in which the postoperative hemodynamic is important.

“This tool helps us to get the best result for each patient,” said author Mark A Fogel, an Associate Professor of Cardiology and Radiology, and Director of Cardiac MRI at the Children’s Hospital of Philadelphia (PA, USA). “State-of-the-art 3D cardiac MRI married to modern biomedical engineering and applied anatomy and physiology enabled this approach”.