Background: Takayasu Arteritis rarely presents in men over the age of 40, particularly with an isolated elevated alkaline phosphatase level. Case presentation: A 46-year-old Hispanic man with no prior history of rheumatic disease presented with acute onset of chest pain radiating to his left upper extremity. His cardiovascular workup was unremarkable with exception of an elevated alkaline phosphatase level (ALP), approximately three times the upper limit of normal. Over a short period of time, his ALP up trended and clinical exam revealed BP discrepancies between his upper extremities, vascular bruits and a profound asymmetry in brachial and radial pulses. MRA-Chest confirmed mural thickening and luminal narrowing of the proximal left subclavian artery and the diagnosis of Takayasu Arteritis was made. Upon receiving glucocorticoids and corticosteroid sparing immunosuppressive agents, his clinical manifestations (chest pain, left arm claudication) had markedly improved while ALP decreased. Conclusion: In addition to clinical exam and imaging studies, laboratory studies (such as ALP) may aid in support of a diagnosis of large vessel vasculitis. In the literature, this has been described primarily in those with giant cell arteritis/polymyalgia rheumatica. In patients with an elevated ALP in the appropriate clinical setting, consideration should be given to the diagnosis of Takayasu Arteritis. This may aid in early initiation of appropriate therapy.

In most cases, women (~80%) are affected, with an age of onset typically between 10 to 40 years [2,3]. TAK most commonly occurs in those of Asian descent [2]. While there are no specific laboratory tests which can definitively diagnose TAK, non-specific laboratory studies which indicate active inflammation (elevated ESR, C-reactive protein, anemia of chronic disease, reactive thrombocytosis) may be present. Much of the underlying etiology and pathophysiology remain unclear; however, cytotoxic T-lymphocytes have been reported to play a significant role in this syndrome [4]. Cell-mediated mechanisms may be similar to those seen in another large vessel vasculitis, giant cell arteritis [5].

We report a unique case of TAK in a male patient >40 years of age initially presenting with a markedly elevated alkaline phosphatase level.

A 46-year-old Hispanic male with a prior history of cholecystectomy initially presented to the emergency department (ED) with a two week history of intermittent left sided chest pain radiating to his left upper extremity with associated claudication. The patient did not have any previous personal or family history of rheumatologic disease. He denied any joint pain, swelling or discomfort. In the ED, Review of Systems (ROS) was positive for generalized fatigue with decreased energy over the past two weeks. ROS was negative for jaw claudication, scalp tenderness, temporal headaches or changes in vision. Vital signs were stable and the patient was noted to have normal BNP, D-Dimer, and electrolytes. Further diagnostics revealed an unremarkable EKG and normal appearing chest x-ray. Serial cardiac enzymes did not show any evidence of myocardial injury. The only laboratory abnormality detected was an elevated Alkaline Phosphatase (ALP) of 392 IU/L (~3x upper limit of normal). Due to a recent normal cardiac stress test, a Coronary CT Angiography (CCTA) was instead pursued. The CCTA demonstrated a calcium score of 0 without evidence of coronary artery plaque or stenosis, however mild thickening of the ascending thoracic aorta wall without dissection was noted. The patient received nitroglycerin and narcotic pain medications and was subsequently discharged. During outpatient follow-up five days later, the patient continued to have chest discomfort with left arm claudication. On physical exam, the patient had a wide disparity in blood pressures between his upper extremities (RUE: 162/62 mmHg & LUE: 118/84 mmHg) and a vascular bruit was auscultated in the left infraclavicular area. Additionally, a profound asymmetry in brachial and radial pulses were appreciated. At this time, the patient underwent workup for aortitis. Labs revealed an elevated ALP of 481 IU/L with elevated markers of inflammation (ESR 19 mm/hr and C-reactive protein 11.8 mg/L) with ALP iso-enzymes elevated for liver (79%) and decreased for bone (21%). All of the following further workup was negative/within normal limits: antinuclear antibody with immunofluorescence assay (ANA with IFA), Rheumatoid Factor (RF), anti- CCP, Angiotensin Converting Enzyme (ACE) level, Rapid Plasma Reagin (RPR), Venereal Disease Research Lab (VDRL), IgG subclass, Creatine Phosphokinase (CPK), Antineutrophil Cytoplasmic Antibodies (ANCA) panel, Quantiferon Gold, and Serum Protein Electrophoresis (SPEP). Urinalysis was normal and did not demonstrate any proteinuria. MRA Chest +/- contrast demonstrated mural thickening and luminal narrowing of the proximal left subclavian artery (Figures 1-3). Given the patient’s active chest pain with left arm claudication in the setting of laboratory and MRA abnormalities, he was sent to the hospital. During this second hospital admission, labs revealed an ALP of 466 IU/L with elevated C-reactive protein 14.2 mg/L. His labs also demonstrated an elevated paraprotein gap (total protein-albumin >4) and gamma-glutamyl transferase (GGT) of 685 U/L (>7x upper limit of normal). CT-Angiogram of his neck (Figures 4 and 5) demonstrated moderate stenosis involving the origin of the left subclavian artery. MRA Abdominal Aorta was unremarkable. Patient received pulse dose IV Methylprednisolone for three days and was discharged home on daily Prednisone 60mg along with Atorvastatin and Pantoprazole. During subsequent outpatient follow-up visits, the patient’s left radial pulse was nonpalpable/ very diminished with continued blood pressure disparities along with vascular bruits. Prednisone was continued at 60mg and additional immunosuppressive therapy was required. Cyclophosphamide PO at 25mg/day instead of 50mg/day was initiated in the setting of elevated ALP and concern for hepatotoxicity (azathioprine was contraindicated due to low thiopurine methyltransferase level). During subsequent clinic visits, his clinical manifestations (chest pain, left arm claudication) had markedly improved while ALP decreased 65% (481 IU/L  170 IU/L). Due to stability of his liver function, cyclophosphamide was increased to 50mg/day while the patient’s daily prednisone dose was reduced. Trends of ALP and markers of inflammation before (Table 1) and after cyclophosphamide initiation (Table 2) are shown below. 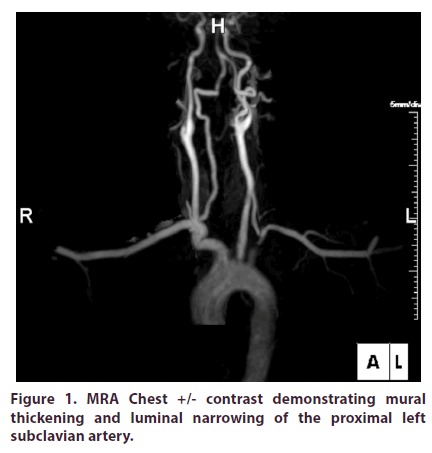 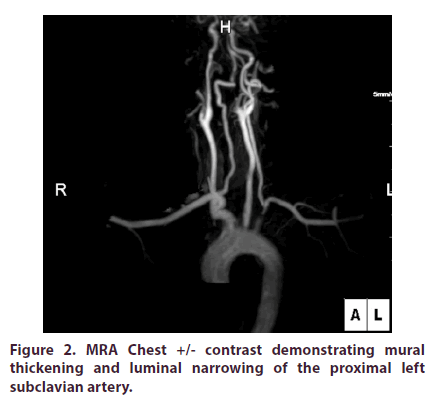 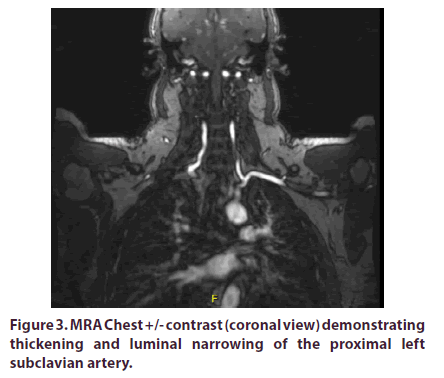 Table 1. Trends of ALP and inflammatory markers before cyclophosphamide initiation.

Table 2. Trends of ALP and inflammatory markers after cyclophosphamide initiation.

Takayasu Arteritis, which usually occurs in young females of childbearing age, is a rare large vessel granulomatous vasculitis of unknown etiology. This disease was first described over 100 years ago, however its underlying mechanisms remain poorly understood. The 1990 American College of Rheumatology classification criteria [3] for TAK include:

• Age of disease onset at or before 40 years

• Bruit over subclavian arteries or aorta

For purposes of classification, a patient is said to have TAK if at least 3 of these 6 criteria are present (3+ criteria met yields a sensitivity of 90.5% and a specificity of 97.8%) [3]. Biopsy of a vessel is not necessary to establish a diagnosis of TAK if the imaging studies and clinical symptoms are characteristic.

ALP is divided into four isoenzymes, depending upon the site of tissue expression (intestinal, placental, germ cell or liver/bone/kidney) [6]. Cholestatic liver enzyme elevation (elevation of ALP/GGT more so than AST/ ALT) most commonly occurs due to intrahepatic ductal injury or extrahepatic biliary obstruction. Large vessel vasculitidies may present with elevated ALP [7]. In the literature, this has been described primarily in those with Giant cell arteritis (GCA)/Polymyalgia Rheumatic (PMR) [7-9]. In one study, elevated ALP was present in approximately one third of GCA/PMR patients [10]. However, this has also been remotely described in other rheumatic diseases, such as rheumatoid arthritis [11] and ankylosing spondylitis [12]. In one pertinent study, the ALP level was found elevated in 73% of 40 TAK patients after vessel involvement had been detected [13]. The exact basis of this cholestatic pattern is unknown, however it has been linked to systemic inflammation in conjunction with possible underlying subclinical abnormalities of hepatic canaliculi [14].

As the abnormal ALP may correlate with disease activity, it is expected that control of the underlying vasculitis would lead to improvement in ALP levels. Since initiating further immunosuppressive therapy with cyclophosphamide, our patient’s ALP down trended significantly which correlated with his clinical improvement. On subsequent outpatient follow-ups, he was no longer experiencing chest pain or left arm claudication. In addition, his left brachial and radial pulse was palpable 2+, consistent with his right brachial/ radial artery exam.

Our case demonstrates an uncommon presentation of TAK in which a Hispanic male>40 years of age initially presented with an isolated elevation of ALP. The association of TAK and elevated ALP is not well known, thus the presence of a cholestatic pattern of liver injury could possibly postpone a correct diagnosis of TAK. Therefore, in patients with an elevated ALP in the appropriate clinical setting, consideration should be given to the diagnosis and treatment of TAK. This may aid in early diagnosis and prompt immunosuppressive therapy to prevent long-term complications.