Determination of hemodynamic and rheological properties in carotid artery diseases

Aim: The cause of all carotid artery diseases is directly related to the morphological structure and hemodynamic properties of the carotid artery and its branches. Our aim of research is to find answers to the following two questions. 1-Compared to normal patients, how can hemodynamic and rheological changes occur in the carotid arteries and its branches of the patients with stenotic, aneursymatic and dissection? 2-And how do these changes differ according to diseases?

Results: Patients with extra cranial and intra cranial aneurysms were found to have lower shear stresses, slower blood flow rates, but on the contrary, having higher blood pressure and higher Reynolds numbers that affect the artery walls. On the other hand, higher shear stresses, higher blood flow velocities, lower Reynolds numbers and lower wall tension values were found in patients with dissection.

Conclusion: It has been concluded that the presence of aneurysm and dissection may play an important role in vascular shaping, or vice versa.

The flow pattern of the blood flowing in the artery is very important for identifying the diseases occurring in vascular branches [1,2]. The most common carotid diseases known to cause cerebral stroke and stroke are; stenosis, aneurysm and dissections. The first of these is carotid stenosis. Geometry of carotid artery is also a risk factor for development of atherosclerosis [3,4]. Others are extracerebral or intracerebral aneurysms. Again, branching morphology in the carotid bifurcation regions may affect the flow dynamics, leading to development of aneurysm in the carotid artery bifurcation region, and then in the brain. Research on this issue has shown hemodynamic stress as a critical factor leading to the remodeling of the arterial wall [5,6]. The third is carotid dissections. While carotid artery dissections account for 2% of all ischemic strokes, this rate rises to 20% in young adults fewer than 50 years of age [7-9]. The main mechanism in the development of carotid artery dissection is the rupture of the carotid artery in the intima layer, and the blood in this region advances through the artery and forms an embolic or aneurysmatic pseudo-lumen in the subintimal or subadventional layers. Finally, this causes blood flow dynamics to deteriorate [10-12].

The cranio-cervical CTA images of the patients who referred to our clinic for the proof of the hypothesis and who were diagnosed with carotid stenosis, carotid dissection and extra or intra cranial aneurysm were scanned retrospectively. Our institute’s Local Ethics committee has approved us to use hospital’s archive data in this study (19-9.1T/6, 18/09/2019). As a result of archive review, CTA image data of a total of 136 patients (33 were normal, 37 were stenotic, 30 were aneurysmatic and 36 were dissection) were selected. Images of patients that had only one reported disease (stenosis, aneurysm or dissection) were considered diseased. As a result of screening, patients having pathology other than these diseases were excluded from the study. The data of the patients who applied to the hospital with a different complaint and who underwent CTA examination but were evaluated as normal were considered normal for comparison purposes. 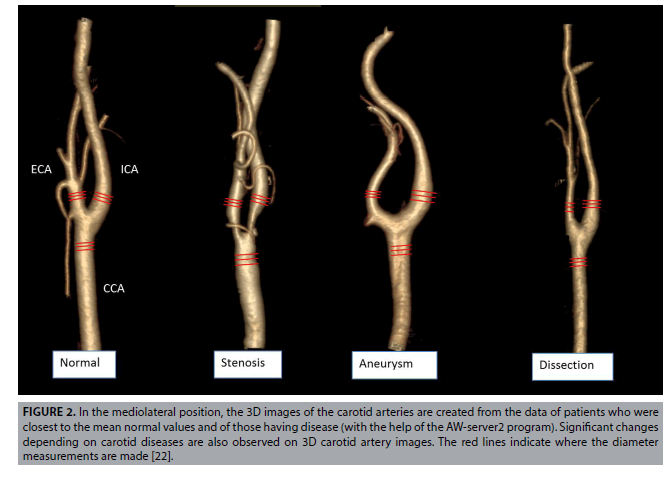 Figure 2: In the mediolateral position, the 3D images of the carotid arteries are created from the data of patients who were closest to the mean normal values and of those having disease (with the help of the AW-server2 program). Significant changes depending on carotid diseases are also observed on 3D carotid artery images. The red lines indicate where the diameter measurements are made [22]. 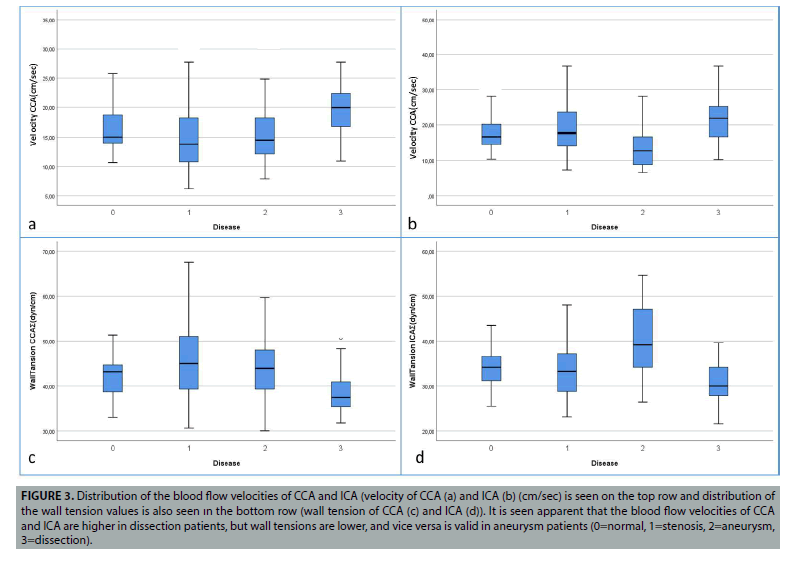 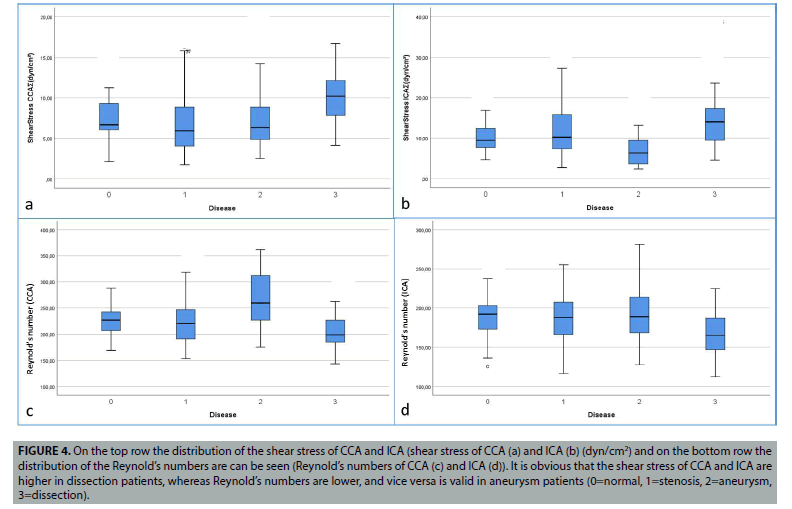 These data obtained from images of normal individuals and the patients with carotid disease were compared and evaluated using SPSS descriptive statistics, Independent Samples T-Test, and graphic programs. In calculations, the known equations listed below were used.

As a result of the analysis, hemodynamic and rheological data calculated through biophysical formulas and methods measured on normal and diseased carotid images are seen in Table. No statistically significant difference was found between normal cases and patients with carotid stenosis. It is obvious from these results that the changes in hemodynamics of patients with stenosis are localized only in the area of stenosis, whereas these local changes do not disturb the form of entire carotid and hemodynamics.

When the data of patients with carotid aneurysm are compared with normal data, significant differences were found. According to this, ICA shear stress (p=0.004), ICA wall tension (p=0.0001), ICA blood flow rate (p=0.001), Reynolds number CCA (p=0.000), Reynolds number ECA (p=0.001), total Raynolds numbers (p=0.001), total wall tensions (p=0.019) and total blood flow rates (p=0.066) were different. In other words, patients with extra or intra cranial aneurysms were found to have lower shear stresses, slower blood flow rates, but on the contrary, having higher blood pressure and higher Reynolds numbers that affect the artery walls. Therefore, the fact that the pressure on the arterial walls of the patients with aneurysms is high and the blood flow is also turbulent, so, this explains the reason for aneurysm. It is understood from these results that the morphological hemodynamics in the carotid arteries of patients with aneurysm had impaired.

the branching geometry that forms the vascular structure, the shaping of this geometry, and the flow of blood within this structure with the lowest energy cost. Despite the limitations of growth and different living environments, these laws are considered to work globally. There were also researchers who suggested the structure-function principle regarding the branching geometries of vascular structures. For example, Schreiner [17] on the optimal design principles of arteries, and Kamiya and Togawa [18] on the minimum blood volume principle are among those who recommend. Murray was the first to define the minimum cost function in vascular bifurcation [19-21]. This definition is actually based on the Hagen-Poiseuille law, which states that the most important factor regulating fluid flow in the pipe is the radius of the vessel. In addition, the total cost function of the circulatory system is based on the logic equal to the sum of the individual cost functions of all units that make up it. In the publication, which is a preliminary study of this study, the same author found that aneurysm patients had high ICA diameters, bifurcation angles, and minimum cost functions [22] (TABLE 1).

TABLE 1: In our study demographic data showing the diameter and angle values measured on normal and diseased carotid images are seen [22].

David and et al. found the average Reynold's number to be 300. In the continuation of the same study, they found that the wall shear stress values were higher on the inner surfaces of the vessels. Accordingly, CCA average 8 dynes/cm2; ICA found an average of 26 dynes/cm2 and ECA found an average of 14 dynes/cm2 [23]. When the average shear stress values of our normal patients are analyzed, the CCA average is similar to 7.4 dynes/ cm2, while it differs for ICA (10.5 dynes/cm2) and ECA (10.9 dynes/cm2) (TABLE 2).

TABLE 2: Hemodynamic and rheological data calculated through biophysical formulas and methods measured on normal and diseased carotid images are seen.

Glagov et al. reported that shear stress has played a critical role in determining where vascular pathologies originate from [24]. They also emphasized that shear stress plays a significant role in the development of phenotypic changes in which endothelial and metabolic balance associated with the onset and development of atherosclerosis impair [25,26]. Again, it has been reported that high shear stress promotes dilatation or structural remodeling of the arterial wall and even causes early emergence of cardiovascular diseases [27]. In fact, another researcher reports that carotid artery bifurcation is asymmetric in nature and this causes flow split in connection with the branching angle [28]. Therefore, it is observed that the blood flow rate in the bifurcation regions is generally curved. For this reason, it is observed that the maximum velocity point is not located in the center as in the straight artery segments and slips towards the inner walls of the ICA and ECA [29,30]. Impaired flow patterns are also often found on the outer wall of the sinus, where they create low and oscillating wall shear stress levels. Already atherosclerosis develops mostly in the outer regions where the wall shear stress in the artery is the least. Stenosis mostly locates in the outer regions of arterial bifurcation sinuses. On the contrary, the apex of the bifurcation and the ECA inner wall are high wall shear stress zones known as protective against atherogenesis [31]. It has also been reported that wall shear stresses create a dynamic flow environment in the stenotic and poststenotic regions of the arteries [32]. In our study, since the stenosis degrees of patients with stenosis are different, shear stresses of stenosis regions were not calculated. There was no significance in shear stress values outside the stenosis region.

On the other hand, aneurysms most often develop in vascular bifurcations, where blood flow is turbulent and shear stress forces are strong [33]. It has even been reported that the apex of arterial bifurcations are the most common sites for aneurysm formation, and these areas have high levels of shear stress and wall tension [34]. Again, compared to normal patients, carotid arteries of patients with extra and intra cranial aneurysm; shear stresses were low (p=0.004), blood flow rates were slow (p=0.001), but on the contrary, wall tensions (p=0.019) and Reynolds numbers (p=0.001) affecting the artery walls were found to be high. From these results, it is understood that the morfological hemodynamics in the carotid of patients with aneurysms are negatively impaired. It is obvious that this structural change in the carotid arteries of patients with aneurysms complicates the flow or increases the amount of energy required for blood flow. Therefore, development of aneurysm is thought to be effective in vascular shaping or, conversely, in increase of vessel diameters and bifurcation angles during development of dissection.

On the other hand, some carotid bifurcation studies also report that the curvature and configuration of the vessel can create varying levels of wall shear stresses in different regions (1 dyne/cm² to 600 dyne/cm²) within the same vessel [35]. Some researchers also found comman carotid artery mean shear stress values as 9.5 [36], 7.0 [37], 12.1 [38] and 15.3 dynes/cm² [39]. The comman carotid artery average shear stress values we found were 7.2 in normal people, 7.4 in stenotic patients, 7.2 in aneurysmatic patients, and 10.2 dynes/cm² in patients with dissection.

The lack of measurement and evaluation for the stenosis region before and after the patients with stenosis is deficient.

Aneurysms most often develop in vascular bifurcations, where blood flow is turbulent and shear stress forces are strong. The apex of arterial bifurcations is the most common sites for aneurysm formation, and these areas have high levels of shear stress and wall tension. It has been concluded that the presence of aneurysm and dissection may play an important role in vascular shaping, or vice versa.