CPLA is a vascular anomaly of relevant clinical importance and commonly underdiagnosed by vascular physicians. It is a vascular lesion localized in the submucosa of the upper or lower lip. The pathology of the lesion consists of a dilated distal branch of the labial artery. Diagnosis can be usually performed with the typical clinical findings and Doppler Ultrasound. It is important to establish a correct diagnosis of this benign lesion, because if ulceration occurs, it can simulate a lip carcinoma. Lesion can lead to a profuse bleeding, with minor trauma, like in dental surgery, and may need to be treated. The purpose of this case report is to communicate the clinical features of this unknown benign vascular lesion that can be mistaken with an arterio-venous malformation. Two cases and review of the literature is presented outlining the clinical and imaging diagnosis. Main feature of the first case is that it is the only case presented up to the date with Doppler and Angiographic correlation. Second case opens the door to minimally invasive percutaneous treatment.

In Caliber persistent labial artery (CPLA) can be defined as a vascular anomaly, which consists in the absence of distal tapering and branching of an artery when it penetrates in the submucosal tissue. The term “Caliber Persistent Artery” was first coiled by Voth [1] in 1962, and resembles the well-known gastric Dieulafoy [2] lesion. It was not until 1962 that Howell [3] described the first case of Persistent Caliber “Labial Artery”.

Reported incidence in large samples of healthy population can range between 3-5% and has equal gender distribution [3-12]. Lesion presents most frequently in the fifth decade of life. To date less than 20 publications are available, all with few reported cases and scarce imaging correlation.

A 40 year old woman was referred from his dentist, before a maxillary implant procedure, because the physician noticed a red-violet pulsatile lesion on the right margin of her upper lip (FIGURE 1). In clinical examination it was a 9 mm slightly elevated and palpable lesion, not painful and with pulse. A Doppler Ultrasound was performed revealing a vascular lesion in connection with the labial artery (FIGURE 2). Unaware of the existence of a CPLA entity and including an arteriovenous malformation (AVM) as a possible diagnosis we performed a Carotid Angiography. An external carotid angiogram with selective catheterization of the facial artery showed a fusiform dilatation of the distal labial artery in early capillary phase without sign of venous drainage (FIGURE 3). CPLA diagnosis was done and the lesion was followed-up by Doppler Ultrasound, not increasing size and being asymptomatic for 4 years. Figure 1: Pseudotumoral submucosal lesion on the lateral aspect of the upper lip. 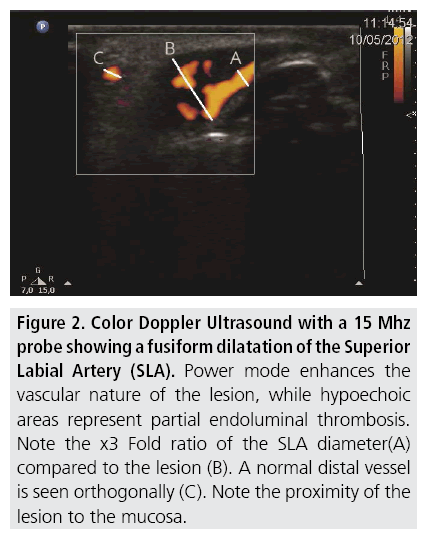 Figure 2: Color Doppler Ultrasound with a 15 Mhz probe showing a fusiform dilatation of the Superior Labial Artery (SLA). Power mode enhances the vascular nature of the lesion, while hypoechoic areas represent partial endoluminal thrombosis. Note the x3 Fold ratio of the SLA diameter(A) compared to the lesion (B). A normal distal vessel is seen orthogonally (C). Note the proximity of the lesion to the mucosa. A 34 year old woman was referred from the Dermatologist with a solitary painful paramedian lesion of the left upper lip to exclude AVM. Doppler Ultrasound showed a 6 mm fusiform dilatation of the labial artery with partial endoluminal thrombosis. With the diagnosis of CPLA and because of the slight pain and patient anxiety of presenting a bleeding complication with minor trauma, we decided to perform an ultrasound guided injection schlerotheraphy of the lesion. A 30 G needle was used and 0,1 cc of thrombine was injected inside the lesion until total thrombosis of the lesion occurred. Manual compression was done in both sides of the lesion in order to isolate the lesion, obtain slow flow and control possible distal embolization. In one year follow-up, the lesion decreased size to 4 mm and was totally thrombosed and not painful. The study was approved by our institutional review board. Informed consent of patients was waived.

CPLA is prevalent and unknown vascular anomaly for most physicians that consist in a distal segmental dilatation of the submucosal labial artery. Due to the vascular nature lesion it is often mistaken as AVM or lip carcinoma. The physiopathology underlying the lesion is unknown. A congenital arterial vascular malformation that progressively enlarges with age until becomes visible and pulsatile or degenerative connective tissue disorders that support the vessel has being postulated. 12 Mechanical factors (like smoking), aging and solar exposure can predispose to an alteration of the connective tissue that supports the vessel.

It is important to recognize this lesion because severe blood loss might happen in case of trauma, dental manipulation or dermatological biopsy. Some cases with multiple CPLA might have an association with other coexisting arterio venous malformations (AVM), hemangiomas, varices and Dieufolay lesions in the gastrointestinal tract with an increased risk of bleeding. [7] The most common presenting sign is an asymptomatic mucosal tumefaction located in the lips. It can be blue or have the same color as the lips. It is a characteristically soft “pulsatile” lesion on palpation. A typical lateral pulsation is seen which only an artery can exhibit. Most cases are solitary and occur in the lateral border of the upper lip. In the majority of cases the diagnosis can be made clinically by the characteristic location and pulsatile nature. In a review of 210 cases of CPLA the most clinical reported clinical findings were a pulsatile submucosal lesion, with a 2:1 ratio in the upper lip, without gender preference. None of the cases had an ulcer or a carcinoma was found. Although final diagnosis relies on histology, excisional biopsy may lead to profuse bleeding and disappointing cosmetic results. Color doppler ultrasound can help to confirm the diagnosis [4,5,9,11]. A segmental fusiform dilatation of the vessel or hypoechoic lesion can be seen when using high frequency probes (15 Mhz). Mural thrombosis can be found.

Color doppler shows color enhancement of the lesion, and spectral doppler a characteristic high resistance arterial waveform (FIGURE 4), as opposed to arterial AVM where a low resistance waveform is present and venous AVM where venous or absence of flow is the rule. Angiography may be performed when equivocal findings are present. It has the drawback of being an invasive method with possible complications. It can be indicated preoperative or with interventional therapeutic purposes. As in our case, hand injections with a catheter in the facial artery or selective microcatheter injection in the superior labial artery showed a distal fusiform dilatation of the vessel. No early venous drainage suggesting an arteriovenous fistula or contrast localized tumoral enhancement was found. The facial artery, also known as the external maxillary artery originates from the external carotid artery and serves the components of the face. It mainly branches into the inferior labial artery, superior labial artery (SLA) and angular artery [10]. Labial arteries are remarkably tortuous to accommodate itself to the lip movements. Anatomy is important to perform a selective catheterization of the facial vessel to obtain a diagnosis and a superselective catheterization of the SLA in case an endovascular embolization is planned. In the new cosmetic era, with the increase of dermal fillings, it is essential to know the topographic anatomy of this vessel to avoid inadverted puncture resulting in arteriovenous fistula and pseudoaneurysm. Differential diagnosis includes AVM, squamous cell carcinoma [8], Masson´s tumor, Neurofibroma and inflammatory masses. If there is traumatic injury to the lips or history of cosmetic dermal filler is present an arterial pseudoaneurysm or an arteriovenous fistula should be ruled out. Figure 4: Spectral Doppler Ultrasound of the lesion shows a high resistance flow, without an associated fistula.

Most CPLA lesions are benign and do not require treatment. Ultrasound can also be used as a follow-up non-invasive tool. In symptomatic cases or when diagnosis in uncertain, surgery can be performed and consists in excision of the lesion associated with arterial ends ligation [13,14]. Secondary submucosal changes depend on the distance of the arteria from the mucosal surface. In our patient treatment indication was pain, and the lesion was parcially thrombosed. In order to avoid a possible cosmetic scarring secondary to surgery, we performed an ultrasound guided injection of schlerosant. We choose thrombin, instead of liquid/foam of polidocanol because of the theorical risk of mucosal necrosis due to the proximity of the vessel to the mucosa. With a minimal amount of thrombin we achieved a good technical result. Injection was continuously monitored in real time by ultrasound and slight tension and pressure of the surrounding tissue favored the precise intralesional injection and collapsed flow and distal branches. No embolic or mucosal changes occurred and in follow up ultrasound, the treated segment did not recanalize and decreased in size. Clinical results were satisfactory and patient did not complain of pain or pulsatile sensation.

Lesion bleeding risk is low, although patients should we warned and avoid trauma to the lips (cigarette, pipe stems, straws, sun exposure…) and special care in case of dental manipulations.

Lesion ulceration can be found. Mechanical pressure in the lip, sun exposure, medications and arteriosclerosis are predisposing factors. It usually acute in onset and rapidly heals, and it is caused by ischemia of the submucosal tissue that overlies the artery. Although lesion growth or chronic ulceration should prompt lesion exicisional biopsy in order to rule out a malignant process [15].