Patients and Methods: The study was carried out on 101 patients with NASH. All patients underwent a liver biopsy for histological assessment of liver fibrosis and non-invasive methods for assessment of liver fibrosis including FIB4, NFS, FibroScan, and ARFI. Cut-off values along with the diagnostic accuracy of these methods were determined by receiver-operating characteristic (ROC) curves.

Conclusions: Liver stiffness determined by these methods had significantly correlated with the fibrosis stages. FibroScan and ARFI had more accurate than NFS and FIB4 in diagnosis of advanced fibrosis. NFS was the best method for screening advanced fibrosis (≥ F3) in patients with NASH.

Non-alcoholic fatty liver disease (NAFLD) is the most common liver disorder in the world. Recent studies have shown that NAFLD is a growing health problem in the Asia Pacific region. The important risk factors associated with NAFLD are obesity, diabetes, hyperlipidemia, and hypertriglyceridemia. NAFLD includes non-alcoholic fatty liver (NAFL) with only fatty liver, no hepatocellular injury; and Non Alcoholic steatohepatitis (NASH) when there is hepatic cell damage with or without liver fibrosis. About 10% of NAFL progress to NASH within 10 years. In addition, 5% - 25% of NASH population progress to cirrhosis, and 30% - 50% of these patients will die from complications within the next 10 years. NASH with the advanced liver fibrosis has a risk of liver cancer [1]. Therefore, staging liver fibrosis plays a very important role in the indication of appropriate treatment to prevent changes to advanced fibrosis (≥ F3).

So far, liver biopsy is still considered as a gold standard for assessing liver fibrosis. Nevertheless, liver biopsy is an invasive method with some severe complications. There have been some non-invasive methods to evaluate rapidly liver fibrosis on patients with NAFLD/ NASH such as NAFLD Fibrosis Score (NFS), FIB 4, and ARFI technique. The NFS is recommended by the American Association for the Study of Liver Diseases (2018) [2] and European Association for the Study of the Liver (2016) [3] in the assessment of patients with advanced fibrosis. The FIB-4 was originally developed for evaluating liver fibrosis in patients co-infected with the hepatitis C virus/human immunodeficiency virus. The score comprises readily available clinical data: age, AST, ALT and platelet count. Transient elastography by Fibroscan measures shear wave velocity of a low-frequency shear wave (50 Hz) transmitted via an ultrasound probe in the liver as an estimate of liver stiffness. ARFI is an elastography technique developed by Siemens using modified commercially available ultrasound machines, integrating both elastography and conventional B-mode ultrasonography. By using conventional ultrasound, the operator is able to avoid large blood vessels and other anatomic confounders of liver stiffness [4]. Conceptually, with increased liver stiffness, shear wave velocity correspondingly increases. There are no studies comparing non-invasive liver fibrosis methods including ARFI, FibroScan, NFS and FIB4 in Vietnam. Therefore, this study aimed to validate the diagnostic usefulness of FIB4, NAFLD Fibrosis Score (NFS), FibroScan, and ARFI in assessing liver fibrosis in patients with NAFLD/NASH.

Population: All patients older than 18-yearolds with nonalcoholic steatohepatitis (NASH) at People Hospital 115 in Vietnam during study period.

Liver fatty from 5% and above,

Ruling out fatty liver due to other causes such as HBV, HCV, alcohol, medications.

There was another cause of chronic liver disease.

Biopsy sample did not meet the standard (< 6 portal space).

All patients were checked medical history, physical examination, and lab tests. Liver biopsy under the guidance of ultrasound was performed at People Hospital 115 in Vietnam. All patients underwent ARFI technique incorporated with Siemens ACUSON S2000. FibroScan was also carried out prior to or after two weeks of liver biopsy. CBC, AST, ALT, IFG, albumin were done simultaneously a week before biopsy. Histopathological samples stained HE, PAS and Trichrome (FIGURES 1 and 2) were analyzed by histopathologist at Pham Ngoc Thach University of Medicine. Result is statistically significant when p <0.05.

Most patients have dyslipidaemia, accounting for 81.3%, of whom hypertriglyceridemia is the most common disorder (63.7%).

Characteristics of biochemistry liver tests (TABLE 2) GGT, AST and ALT had high rate of abnormalities. All patients had bilirubin, ALP, albumin, and INR in a normal range.

According to AASLD and EASL guideline, NFS has 2 cut-off values to exclude (–1.455) and identify (0.676) advanced fibrosis. Thus, we chose these cut-off values to calculate sensitivity, specificity, PPV and NPV [2,3].

Table 3. Stage of liver fibrosis according to Metavir score.

Transient elastography via Fibroscan machine and ARFI were advantage techniques with successful rate in this study was 100%. In this study, NFS, FIB 4, Fibroscan, ARFI (SWV) had significant correlation with degree of liver fibrosis.

NFS, FIB 4, liver stiffness via Fibroscan and ARFI increased in concordance with worsened stage of liver fibrosis according to Metavir score; whereas ultrasound elastography (ARFI and FibroScan) had significantly correlation with biochemical makers (NFS and FIB4) (TABLE 4). 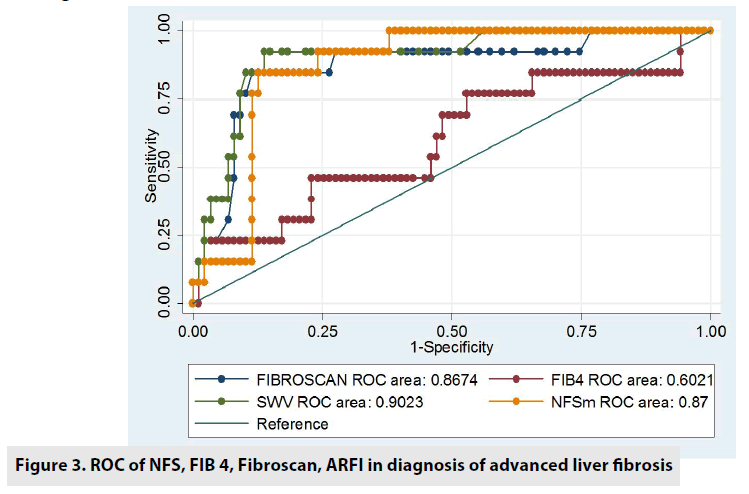 Liver stiffness determined by non-invasion methods including NFS, FIB4, Fibroscan, ARFI had significantly correlated with the fibrosis stages. FibroScan and ARFI were more accuracy than NFS and FIB4 in diagnosis of advanced liver fibrosis. NFS was the best method for screening advanced fibrosis (≥ F3) for patients with NASH.

Tran Thi Khanh Tuong and Nguyen Minh Duc contributed equally to this article. All authors read and approved manuscript. The authors of this manuscript declare no conflict of interest.