Several organic compounds showing anti-malarial activities such as aminoquinolines [1], 3,4,5-hydroxybenzoic acid [2], 2-hydroxybenzoic acid derivatives [3] and hydroxynaphthoic acid [4] have clear and distinct acid base properties as well as hydrogen bond abilities. Due to acid-base properties associated with quinolines and carboxylic acids, they are suitable to form salts and co-crystals [5,6]. Formation of a salt between two active pharmaceutical ingredients leaves scope to bring together two potent molecules easily to make a stable formulation which may act altogether in different manners. Recently activity of several antimalarial drug molecules have been reviewed and showed how such combinations in the form of co-crystal formed through weak interactions can alter antimalarial drug activities [7]. On other hand protein–myosin a complex has important role in regulating depletion of red blood cells caused by the Plasmodium during malaria [8]. Thus, it may be expected that peptide mimics of such protein complex may help to develop in drugs that can disrupt the invasion motor [8]. Hence quinoline molecules with peptide bond may be of interest to test for drug activity towards malaria, as some of them may have additional effect due to the peptide unit attached to the quinoline unit. In this context a quinoline amide derivative was shown to adopt hair-pin structure [9] which is a common feature found in many small oligo-peptide compounds which easily adopt hair-pin structure [10-12]. Based on these points, we have studied anti-malarial activities of a series of salts, co-crystal of aminoquinolines with hydroxyaromatic carboxylic acids and also functionalized quinoline derivatives to distinguish their differences in antimalarial activities. The list of compounds, salts that are studied is listed in Chart 1.

„Synthesis and characterization of the salts and co-crystal

Antimalarial activity of the compounds, against the chloroquine-resistant (FCR-3) and chloroquine-sensitive (3D7) strains of P. falciparum, were determined using [3H]- hypoxanthine incorporation assay [14,15]. The parasites were continuously maintained in vitro in supplemented RPMI-1640 culture media at a 5% haematocrit. The culture was incubated at 37°C in 5% CO2, 3% O2, 92% N2 and synchronized [16] at the ring stage with 5% D-sorbitol beforethe final parasitaemia and haematocrit were adjusted to 0.5 and 1%, respectively. This suspension was incubated with the test compounds and controls (final concentration of dimethylsulphoxide <1% did not have an inhibitory effect on the parasite) for 24 h at 37°C. Thereafter, 25 μL [3H]- hypoxanthine (Amersham; 1.85 μCi/well) was added to each well. The microtiter plate was further incubated for 24 h; following which the parasitic DNA was harvested onto glass fibre filter mats. The dry mats were then transferred to sample bags containing scintillation fluid (Wallac®) and the β-radioactivity counted on the Wallac® 1205 Betaplate scintillation counter. Counts per minute (cpm) were generated and the percentage parasite growth calculated taking the uninfected red blood cells into account. The concentration required to inhibit parasite growth by 50% (IC50 value) was determined from log sigmoid dose response curves using the GraphPad Prism® 5.0 software. Chloroquine and quinine were used as the positive controls. Each experiment was repeated, at least, in triplicate.

To ascertain if the mechanism of action was similar to that of chloroquine, the compounds were incubated with 1 mg/mL haemin in 0.5 M acetate buffer with a final pH of 4.7 [17]. The plates were then incubated for 24 h before the unreacted haemin was removed and the β-haematin crystals were quantified by dissolving them in 2 M sodium hydroxide. The absorbance at 405 nm was used to calculate the IC50 value at which β-haematin formation was inhibited using GraphPad Prism® 5.0 software. Chloroquine was used as positive control and each experiment was repeated three times.

The ferrozine-iron chelation assay was used to determine the ferrous ion chelating properties of the derivatives [18]. The derivatives were incubated at room temperature in the dark with 0.48 mM ferrous chloride dissolved in 5% (w/v) ammonium acetate for 5 min before 1.2 mM ferrozine was added and further incubated for 30 min. Thereafter the absorbance was measured at 540 nm in an ELISA plate reader (Labsystems Multiskan RC) with Ascent Software (version 2.4). Percentage inhibition of ferrozine-Fe2+ complex was calculated with ethylenediamine tetra-acetic acid used as a positive control.

Aminoquinolines generally interact with aromatic carboxylic acids to form hydrogen bonded co-crystals as illustrated by taking example of 6-aminoquinoline with a carboxylic acid shown in Figure 1. In general salt between an acidic and a basic organic compound is formed when ΔpKa. 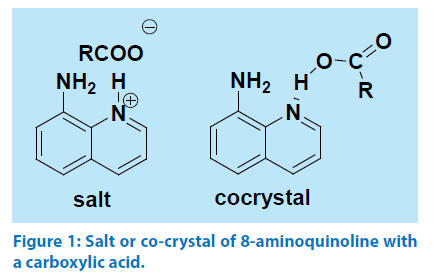 Figure 1: Salt or co-crystal of 8-aminoquinoline with a carboxylic acid.

[ΔpKa = pKa (base) - pKa (acid)] is greater than 2. When ΔpKa value is less than zero, such pair of compounds exclusively forms cocrystal [19,20]. In our case, the differences in pKa (ΔpKa) of corresponding aminoquinoline counterpart with hydroxyaromatic carboxylic acid counterpart in I-IV are 2.49, 0.96, 1.29 and -0.51 respectively. Accordingly, 5-aminoquinoline with 2-hydroxybenzoic acid formed a salt I; 5-aminoquinoline with 3,4,5-trihydroxybenzoic acid formed salt II; 8-aminoquinoline with 1-hydroxy-2-naphthoic acid formed salt III whereas a co-crystal of 8-aminoquinoline with 3,4,5-trihydroxybenzoic acid, IV was formed from reactions of respective hydroxyaromatic acid with corresponding aminoquinoline. Thus, salts I-III and co-crystal IV were confirmed by determining the respective structure by single crystal X-ray diffraction and further confirmed by powder X-ray diffractions (PXRD) technique. To differentiate between the cocrystal and salts, IR spectra of the OH region (2000 cm-1-4000 cm-1) and carbonyl stretching region (1400cm-1-1800cm-1) of salt II and cocrystal IV are compared with the corresponding IR spectra of gallic acid. It is found that the OH stretching region of gallic acid and co-crystal IV are broad, have resemblances (Figure 2a), whereas IR spectra of the salt II shows sharp stretching frequencies at 3458 cm-1, 3348 cm-1 and 33241 cm-1; which differentiated the structural differences due to proton transfer to form salt in the case of II. On the other hand, the carbonyl stretching of gallic acid appears at 1703 cm-1, which appears at 1644 cm-1 and 1686 cm-1 respectively (Figure 2b) in the salt II and in the co-crystal IV. We have confirmed that no overlapping peaks from the quinoline counterpart in the latter region are present. 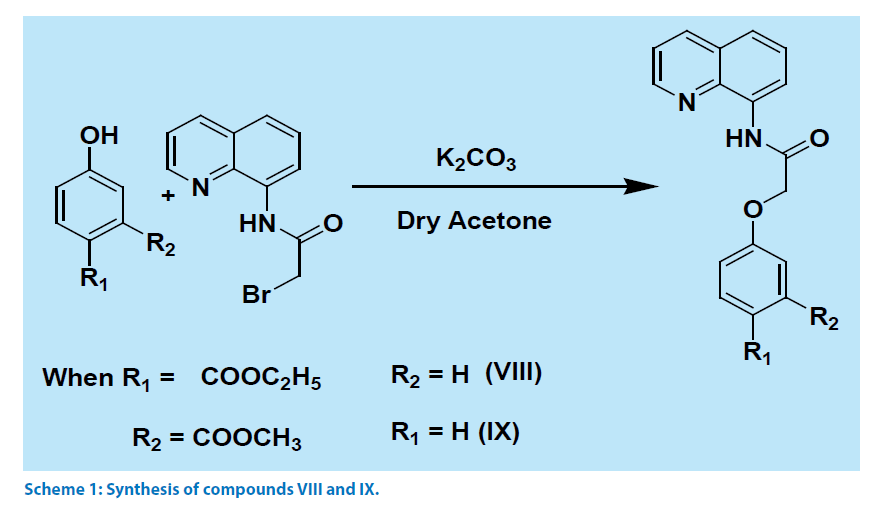 Salts I-III and co-crystal IV showed anti-malaria activity with IC50 values in the 6-20 μM range for the chloroquine-resistant strain, but were four fold less active against the chloroquinesensitive strain (resistance index: 2.0-5.3) (Table 1). However, the activities were less than the quinine standard for both strains. The IC50 values displayed by 8-aminoquinoline and 5-aminoquinoline [1] were found to be greater than 10 μM. On the other hand, structurally related compounds such as 6-(8′-pentadecenyl)- 2-hydroxybenzoic acid [3] were reported to have IC50 value 10.1 μM; for 3,5-dihydroxy- 2-naphthoic acid [4] 25 μM and for gallic acid [2] 71.5 μM. These indicate that the IC50 values for the salts and co-crystals were much less than the individual component. These results point out the combined effects of the two active components influences their effective antimalarial activities and changes the efficiency of the individual component. Derivatisation of aminoquinoline did not enhance antimalarial activity, but instead displayed minimal antimalarial activity at 50 μM when tested against the chloroquine sensitive strain (Table 1). Aminoquinoline compounds are known to chelate metal ions such as iron, thus associated themselves with potential free radical scavenging activity through complex formation [16]. But such antioxidant properties were not retained when the salts, co-crystal and derivatives that were tested. None among these adducts were able to inhibit β-haematin or haemozoin formation which was found to be the case with 2-amino-8-hydroxyquinoline [18-21]. The result is suggestive of the fact that salt of gallic acid (IV) has the lowest IC50 value with respect to the other tested compounds listed in Table 1. Use of poly-hydroxyaromatic carboxylic acid namely gallic acid in this salt as one component, enhanced water solubility and maintained a neutral condition by neutralizing quinoline counterpart. In order to gain support towards the importance of use of a salt over a covalent compound, we studied the antimalarial activity of compound V-IX (Table 1). IC50 value of II<IV, in these cases the gallic acid is a common component. Thus the quinoline counterpart affected the antimalarial activity. The salts and co-crystals given in Table 1, which were tested for antimalarial activity retained good safety profiles [1]. Among individual quinoline derivatives the bis-quinoline derivative VII was a found to be a good chelator for iron, and it displayed antimalarial activity comparable to the salts. The other compounds V, VI, VIII, IX were poor in showing antimalarial activity. It is interesting to note that particular compound VII shows least binding affinity to amino acid such as glycine and methionine but have selectivity in binding hydroxy carboxylic acids such as ascorbic acid and lactic acid [5]. From the structural differences among these compounds the compound VII has a hydroxyquinoline part which probably is responsible for iron-chelation and thereby causing an enhancement in the antimalarial activities. Thus it may be suggested that the there is a clear difference between the the mechanistic course of action of antimalarial activities by the adducts and the covalently linked compounds.

Table 1: Antimalarial activities of the compounds.

We have shown that salts and cocrystal of quinoline with hydroxyaromatic carboxylic acids enhance antimalarial activities over parent compounds. Enhanced potency could be attributed to the increase in hydrophilicity of these salts and co-crystals. Antimalarial potency of covalently linked amides derivatives of aminoquinolines was not observed but incorporation of a hydroxyquinoline part to such a frame has induced potency as in the case of compound VII. It was also observed that the antimalarial action of salt II was directed against the intra-erthyrocytic parasite is of comparable safety profile to chloroquine and its mechanism of action is independent of iron chelation and inhibition on haemozoin formation.

Authors JBB and PK thanks Ministry of Human Resources and Development (India) for departmental support. This work was partially supported by the Faculty of Health Sciences of the University of the Witwatersrand, South Africa and the Belgian Technical Corporation for student support.