2Department of Radiology, University of Science and Technology, Khartoum, Sudan

The importance of accurate Fetal Gestational Age (FGA) determination in the management of obstetric patients cannot be over emphasized. The choice of obstetric management decision and its outcome depends on the knowledge of the exact age of the pregnancy.

Objectives: The purpose of this study is to determine the fetal gestational age and correlate it with the conventional parameters.

Results: New Sudanese charts were reported for BPD, HC, AC, and FL. Reference equations for the dating of pregnancy were presented. There is significant fetal biometric difference between Sudanese and non sudanese peoples (eg. Egyptian and Korean). Fetal BPD, HC, AC and FL compared with gestational age, it confirms that there is a significance difference between the measurements and gestational age, p-value is (0.00). There are equations resulting from these tables that explain the relationship between (BPD, HC, AC, and FL) and gestational age for Sudanese people.

Conclusion: The fetal growth is not uniform and varies between different groups of citizens. In the present study, we showed accuracy of sonographic instruments and presented sudanese fetal biometry. We believe that our standard, being derived from singleton pregnant women, is a reference for fetal growth.

The importance of accurate Fetal Gestational Age (FGA) determination in the management of obstetric patients cannot be over emphasized. The choice of obstetric management decision and its outcome depends on the knowledge of the exact age of the pregnancy. Accurate FGA determination enables adequate planning for the appropriate mode of delivery and further management of neonate after delivery [1], helps in counseling women at risk of preterm delivery and in the evaluation of fetal growth and detection of Intra Uterine Growth Retardation (IUGR). Uncertain gestational age has been associated with adverse pregnancy outcome which includes low birth weight, spontaneous preterm delivery and perinatal mortality independence of maternal characteristics [2]. Haines noted that a combination of uncertain date of LMP and any obstetric high risk situation (e.g. placenta previa, pregnancy induced hypertension, IUGR) places the fetus in jeopardy because of the difficulty in deciding the optimal time of delivery. Different methods are being employed in the determination of FGA which includes Last Menstrual Period (LMP), ovulation date, date of conception (in case of artificial insemination), symphysis-fundal height, quickening and ultrasonography [3]. Ultrasound has played a vital role in the estimation of FGA and has become an integral part of obstetric practice [4]. Sonographic estimation of gestational age is derived from calculation based on fetal measurement which serves as an indirect indicator of gestational age. Numerous equations regarding the relationship between fetal biometric parameters has been described and have proven early antenatal ultrasound to be an objective and accurate means of establishing FGA [5,6]. These biometric parameters includes Gestational Sac (GS), Crown Rump Length (CRL), Bi Parietal Diameter (BPD), Head Circumference (HC), Abdominal Circumference (AC), and Femur Length (FL). Accurate assessment of FGA using ultrasound has posed a serious problem to obstetricians especially as the pregnancy approaches term. This stems from the fact that there are increased fetal biological variations as pregnancy advances [7,8]. These variations can be caused by maternal age, parity, pregnancy weight, geographic location and specific population characteristics. Also technical factors like inter observer error and different measuring techniques contributes to the fetal variability as pregnancy advances to term [9,10]. noted that the accuracy of these traditional predictors of FGA (GS, CRL, BPD, HC, AC and FL) decreases as the pregnancy advances to third trimester therefore, suggested that in addition to these traditional parameters, ancillary biometric and non-biometric measurements can help narrow the biological variability between fetuses. Butt [12,13] recommended combination of multiple biometric parameters for FGA determination in the third trimester instead of relying on a single parameter. Ansari et al. [14] noted that the Fetal Kidney Length (FKL) is more accurate method of determining gestational age than the other fetal biometric indices based on BPD, HC, FL, and AC between 24 weeks and 38 weeks of gestational age. Fetal kidney can be reliably measured using Trans Vaginal Sonography (TVS) between 14 weeks and 17 weeks of gestation while it can be measured using transabdominal ultrasonography from 18 weeks of gestation and above.

This study carry out to correlate the normal fetal ultrasonic scanning and biometry at 20-41 weeks of gestation in Sudanese population, in the period from May 2016 to June 2020 with 400 Sudanese pregnant Women with uneventful pregnancies (Normal), the subjects comes from different area of Sudan to study area (wad Madani military hospital). The ultrasonic machine used in this study are Esaote my-lab 70 × (made in Italy 2010) real time ultrasound machine with frequency 3.5 MHz curvilinear array transducer, Honda HS2000 (made in Japan 2006) portable real time machine 3.5MHz curvilinear array transducer.

The choice of probes will base on varying degrees of penetration needed (3.5 MHz mainly used in obstetric ultrasound). Freeze frame capability and on screen caliper were used for the measurements. Validity and reliability of the equipment will tested prior to the study through pilot study and quality assurance. Other accessory used in the study like (couch, pillow, bed sheet, cover, sterile gloves, acoustic gel and data collection sheet) attending the designated study area during the study period, with singleton pregnancies at second and third trimester with viable fetus. Pregnancies with established any congenital abnormality, all pathological conditions (diabetes and hypertension), IUGR , abnormal fetal outcome, multiple pregnancy, abnormal fetal position, poorly visualized fetal parts and abnormal placenta and amniotic fluid index were excluded. Verbal consent was firstly obtained from all potential participants. Data collected from the ultrasound reports, Tools to measure height and weight and direct interview by use data collection sheet, Data presented in Tables, Figures and graphs. The study design was approved by the hospital’s ethical committee on research involving human subjects before the study began, No information or patient details were published. Data were analyzed using R statistical package (v.2.14.12, R foundation for statistical computing, 2012) linked to SPSS v.21 (IBM Corporation, 2012).

The patient scanned in supine position on couch trans abdominal technique with 3.5MHz curvilinear transducer, All organs of the fetus must visualize clearly and the gestational age estimated by measure the trans axial image of the fetal skull at the level of thalami and cavum septum pellucid is obtained. The transducer must be perpendicular to the parietal bones. BPD measured at the widest part of the image from the outer edge of the cranium nearest to the transducer to the inner edge of the cranium farthest from the transducer and HC measured by the equation (APD+BPD)/2 × 3.14 or 1.57 × ([outer to outer BPD]+[outer to outer OFD]), AC is a circular section of the abdomen demonstrating an unbroken and short rib echo of equal size on each side. A cross-section of one vertebra visualized as a triangle of three white spots. A short length of umbilical vein and FL measured from blunt end to blunt end parallel to the shaft of the bone.

Fetal biometry is of great interest in obstetrical practice. It is helpful in the estimation of gestational age especially in the women who do not remember the dates of their last menstrual period or whose fundal height on abdominal examination does not correspond to dates. The practice of assessing gestational age in early gestation is valuable in detection of growth aberration in later stages of pregnancy. In addition, fetal biometry distinguished the normal from abnormal fetal structures. Prenatal measurement of fetal parameters and estimated size and weights vary among different populations, depending upon their racial, demographic characteristics and nutrition. It is therefore important that fetal biometry be performed for local population and local charts of normal biometry be constructed and followed for these populations and ethnic groups. Many reference charts and tables have been published since then. However, a number of these were produced using old ultrasound equipment with low spatial resolution in different ultrasound velocities compared with today’s modern realtime scanners which have not only opened up improved measurement technique but also provide us with multiple fetal parameters. Several of these charts, however, have methodological flaws, falling short of the ideal attributes of gestational age related reference curve design, namely: non-identification of the statistical method of analysis, a supernormal data set, in adequate account in variability of measurements with gestation and failure to present scatter diagrams. In the publications of Altman and Chitty, methodological guidelines were created for the construction of fetal biometry charts [15].

The ultimate goal of fetal biometry is to enable the user to predict information concerning a fetus and to verify how closely the fetus confirms to the prediction. While constructing the fetal biometry charts, the statistical justification of the sample size is as necessary as the selection of study design type, so that the results may subsequently be generalized to the whole population or at least to the concerned ethnic group. Mean and standard deviation values of the parameter(s) are computed. The smaller the standard deviation, the less is the variability of the sample around the mean. The standard deviation is also used to define the statistical limits of ‘normality’. These intervals are called confidence limits. Traditionally, the confidence limits are set at the 5th and 95th percentile. The values of 5th and 95th percentile suggest the lower and the upper limits of normal reference intervals or normal ranges for the selected parameter. Scatter diagrams are constructed and regression analysis is done yielding a specific regression equation that enables one to predict the fetal gestational age once the specific values of fetal parameter is known. Fetal biometric studies reported from Iran, Oman, Cameron, Bangladesh, Pakistan and Israel describe the uniqueness and specification of different fetal parameters for their own populations [16,17].

Ethnic variations have also been described. Therefore, biometric curves for one population may over or under estimate the fetal age when used for another population with different demographic characteristics. Thus, the construction and use of biometric norm grams specific for populations and ethnic groups is always recommended. BPD and AC was higher in the Egyptian and Korean women than Sudanese ones in the second and third trimester, while there was an unstable variability between Egyptian and Sudanese women, Egyptian and Korean results about BPD and AC are mentioned in appendix. His may be related to women height and size as well as other epigenetic factors as the nutritional status, level of pollution and socioeconomic standards of our women. Sudanese fetuses have smaller HC than Korean fetuses and almost comparable as those from the Egyptian fetuses. While fetuses of Sudanese women had longer femur than that of Korean and Egyptian counterparts, Egyptian and Korean results about HC and FL are mentioned in appendix [18]. Fetal FL measurement can be estimated by obtaining images of the femur including the shaft and two ossified center. (TABLES 1-4) describes the means, standard deviations, minimum and maximum values of the fetal biometrics (BPD, HC, AC and FL) from 20 to 41 week of gestation. Egyptian and Korean results tables are mentioned in appendix (TABLES 5-8) the table showed the fetal BPD, HC,AC and FL compared with gestational age and get it is mean , standard deviation , minimum value and maximum value among 400 cases. Also showed that there is a significance difference between the measurements and gestational age, p-value is (0.00). 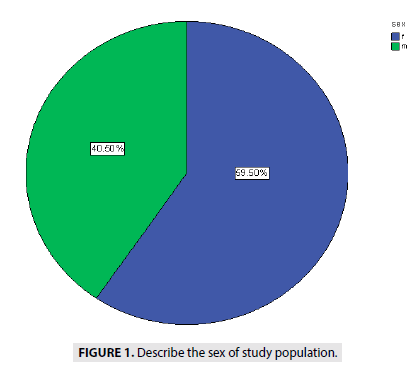 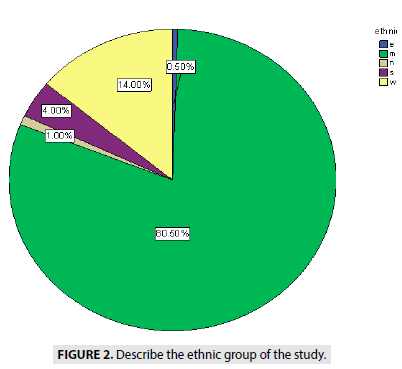 Figure 2: Describe the ethnic group of the study 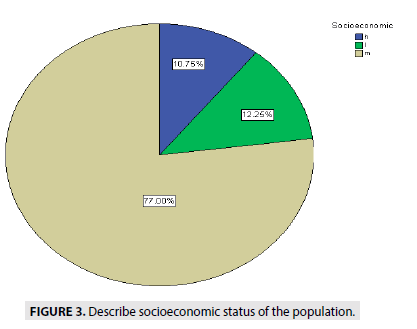 FIGURES 4-7 describe the curve of correlation between fetal measurements and gestational age in Sudanese fetuses. 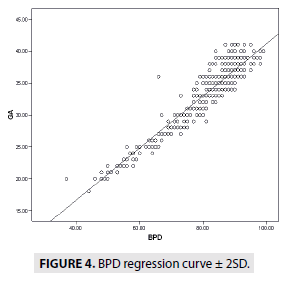 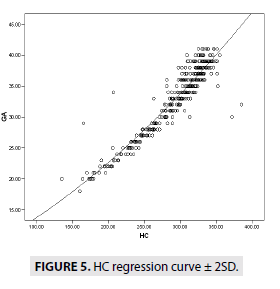 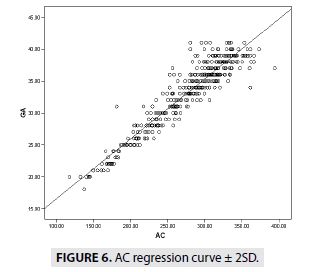 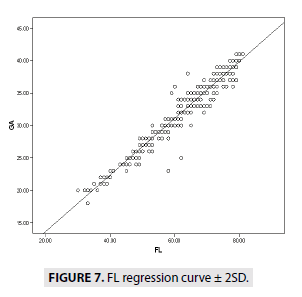 In conclusion, the fetal growth is not uniform and varies between different groups of citizens. These differences in the various fetal biometric measurements among the dissimilar inhabitants emphasis the importance of selecting suitable charts for every population separately. Otherwise, over or underestimation of fetal growth abnormalities will include normally growing babies according to their normal population potential. This has a tremendous impact on the national health and economic resources. We endorse on the need to establish national Sudanese fetal biometric growth references.

In the present study, we showed accuracy of sonographic instruments and presented Sudanese fetal biometry. We believe that our standard, being derived from singleton pregnant women, is a reference for fetal growth.