A destroyed lung is defined as a total destruction of the lung secondary to recurrent or chronic lung infections. The most common cause is tuberculous. Other possible causes include final fase bronchiectasis and sequelae of necrotizing pneumonia [1,2].

The destroyed lung may cause severe complications such as massive haemoptysis, septicaemia and left-right shunt. The shunt can produce pulmonary hypertension and respiratory failure despite having a normal contralateral lung. In some occasions, empyema may complicate the clinic hindering the treatment [2].

Furthermore, this pathology causes thoracic changes such as loss of the ipsilateral lung parenchymal which is mainly replaced by fibrosis, hyperinflation of the remaining lung, contraction and retraction of the hemithorax with decreased intercostal spaces, lift of the ipsilateral hemidiaphragm, significant volume loss and ipsilateral mediastinal shift [2,3].

We present a case report about this theme. Female patient signed an informed and written consent form.

76 year old woman who went to her local hospital with fever up to 39°C, brownish expectoration, left chest pain and breathlessness that has been increasing in recent weeks. She had a colostomy as a result of an adenocarcinoma colon intervention 18 years ago. She used wheelchair due to an ischemic stroke with paresis of the left lower limb during the postoperative. She had never smoked. She referred bronchial hyper reactivity, in addition to pleural thickening probably post-tuberculosis. There were no previous reports or studies from the patient due to her changing residence less than a year ago. The patient had no treatment.

The blood gas analysis was normal with 7.42 pH; 21.2 Bicarbonate; 32.3 pCO2; 93.7 pO2 and 98.6% O2 saturation. The blood analysis results showed: 92 Glucose, 9 haemoglobin, 29.2 haematocrit, 602.000 platelets, 11.550 leukocytes with 98% neutrophils. Clotting was not impaired. The electrocardiogram was normal, with a sinus rhythm with premature ventricular contraction and narrow QRS.

As per the radiological findings, a computed tomography (CT) was recommended. The CT revealed the destruction of the left lung with a pleural collection with air and fluid at the left chest posterior level. Hyperinflation of the right lung with an important mediastinal shift in the affected hemithorax (FIGURE 2). 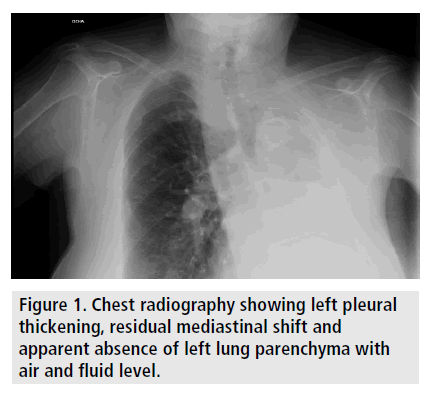 The patient was admitted into hospital and treated with intravenous empirical antibiotics, amoxicillin/clavulanic acid, 1 g/8 h and clindamycin, 600 mg/8 h. The bronchoscopy showed a distortion of the left bronchial tree and a 90% stenosis of the left upper and lower lobes caused by extrinsic compression. The mucosa had inflammatory appearance and not fistulous orifices are objectified.

A 14 French pigtail drainage was inserted, guided by CT 140 cm3 of purulent material were obtained (FIGURE 3) and the presence of air leaks became evident. The microbial culture indicated Steptococus intermedius sensitive to cephalosporin and resistant to norfloxacin, clindamycin and erythromycin, so we changed the antibiotics by intravenous ceftriaxone, 2 g/24 h during 14 days. Figure 2. Imaging Group of CT slices. In the A image is observed an absence of left lung with an important mediastinal shift to the left chest. In the Band C images is showed the pleural collection with the air and fluid level collection. In the D image with mediastinal window, is evidenced with the arrow points the destroyed lung. Furthermore in this image we can observe the important mediastinal shift and the decrease in the intercostal spaces. The patient evolved favourably, having the fever gone away. Fourteen days later of the pigtail drain insertion; it spontaneously came out through the skin. Given the clinical stability of the patient and since no increase of the subcutaneous emphysema was observed, the patient was discharged and a wait-and-see approach advised. After 15 days of the discharge, the patient came back to the emergency service with a fever as her only symptom. The patient was admitted and surgery was decided. Under general anaesthesia and with selective intubation, an incision on the left 9th costal arch in the interscapular region was performed. After partial resection of the costal arch, the cavity was accessed and which contains abundant purulent liquid and showed a slight air leak. Washing and aspiration of the purulent fluid was carried out, followed by the insertion of a 38 French Pezzer drain.

The pleural fluid culture indicated persisting Streptococcus intermedius. The postoperative evolution was satisfactory and the patient discharged with the Pezzer drain. The drain will be permanently kept until the pleural cavity shows no contamination.

The most common symptoms are chronic, but they can also be acute. These include expectoration of purulent content and chronic fever, as in our patient. It can also be associated with dyspnoea and complicated with episodes of recurrent haemoptysis. Destroyed lung can cause multiple complications that require prolonged hospitalization such as empyema, as in the case described here, which complicated the therapeutic approach. The incidence of empyema as a complication of destroyed lung varies, depending on the series, between 23% (Halezeroglu series [6]) and 30% (Blyth series [7]).

The destroyed lung causes multiple histopathological changes such as extensive fibrosis which is observed in the case described here. When the underlying pathology is the left lung tuberculosis, it is more vulnerable to parenchymal destruction. This is due to the layout and anatomy of the left bronchus, which is longer, narrower and more horizontal, worsening secretions drainage [2]. In the case presented here, the left hemithorax is affected. Radiological changes in the thoracic region (e.g. mediastinal shift, retraction of the affected hemithorax, decreased intercostal spaces) of the presented patient are typical of destroyed lung and indicate a chronic process.

Surgery should be considered in patients with progressive disease, complications requiring multiple admissions and when there is resistance to the medical treatment. Destroyed lung with non-pathological contralateral or minimal squeal usually advises pneumonectomy, as long as the patient functionally tolerates the surgery [2,8].

The problem arises when the patient presents pleural empyema as a result a contaminated pleural cavity, as in the case described here. A possible approach is the insertion of a chest drain to sterilize the cavity. In his series of 37 patients, Odell used this procedure, achieving sterility of the cavity within one and six months [9]. In our case, a Pezzer type drain was used. This drainage can be maintained for a long time thanks to its shape and thickness.

In conclusion, destroyed lung is a rare entity, in most cases secondary to pulmonary tuberculosis, which has serious complications that can degrade the patients’ quality of life. Radiologically, it presents typical features showing the thoracic changes of a chronic process.