Aims: A cost–effectiveness analysis was performed to assess the efficiency of low- and iso-osmolar iodinated contrast media in patients undergoing CT in Spain. Material & methods: The primary outcome measure was the reduction of immediate and delayed adverse drug reactions (ADRs). Deterministic sensitivity analyses according to incidence rates of ADRs and clinical management of ADRs was performed.
Results: Low-osmolar contrast media (vs iso-osmolar) showed cost savings of €1682.3 per ADR avoided. Additional cost savings included €799.7 and €2139.5 for each delayed and moderate-to-severe delayed ADR avoided, respectively. For low-osmolar contrast media, moderate-to-severe immediate ADRs accounted for additional costs of €1524.2 and €5781.3, respectively. Conclusion: Low-osmolar contrast media are efficient owing to lower cost and lower risk of delayed ADRs, the treatment of which is more costly.

Iodinated contrast media (CM) are among the most commonly used radiocontrast agents in radiographic examinations or in MRI studies. The clinical development of non-ionic low-osmolar or iso-osmolar iodinated CM has improved both image quality and safety of radioimaging studies. Nevertheless, CM-induced adverse reactions continue to be a public health problem; they are unpredictable and diverse in nature [1].

In this context, we conducted a decision-based analysis to examine the cost–effectiveness of lowand iso-osmolar iodinated CM in adult patients undergoing CT in Spain.

A decision-analytic model was designed to perform a generalized cost–effectiveness analysis of the safety of different iodinated CM. The structure of the model is shown in Figure 1. There are two options: ‘use of low-osmolar CM’ or ‘use of iso-osmolar CM’. For each option, the probability of each outcome was entered into the model to calculate expected rates of ADRs. Data from a series of cohort epidemiological studies [5,7] and reviews of the literature [1,8] were used to calculate the probabilities of ADRs assigned to each node of the decision model. The adverse reactions were characterized according to the time elapsed from the administration of the CM to appearance of the adverse outcome and the severity of symptoms graded [101] as follows:

▪ Immediate if the reactions occur acutely a few seconds after starting a CM injection up to 1 h afterward;

▪ Delayed if the reactions occur more than 1 h after CM injection and up to 7 days afterward;

▪ Mild if the reactions do not require treatment;

▪ Severe if the reactions are potentially or immediately life-threatening, produce permanent or significant disability, cause hospitalization or prolongation of hospital stay.

All costs were reported as 2010 Euros from the perspective of the hospital and only direct costs to the public health system were considered. The model included the costs of the iodinated CM, concomitant treatments, healthcare personnel and hospitalization. Treatment in the emergency department included all types of care for a length of stay shorter than 48 h. The source of costs for inpatient care, including treatment in the emergency setting when length of stay was longer than 48 h, was obtained according to the Regional Tariff Nomenclature of the NHS at the Region of Valencia (Spain) [102]. Costs of CM and concomitant treatments were the cost of purchasing the drugs from the pharmaceutical company (company sales price) included in the database of medicines and active ingredients of the General Spanish Council of Pharmacists [103]. The cost of treatment for the management of each ADR was obtained considering the weighted average cost for specific treatments based on the opinion of four clinical experts and data published in the literature [9,101]. Owing to the time horizon selected for the study (1 month from the administration of the iodinated CM), discount rates to drug acquisition costs or clinical outcomes were not applied. Neither costs nor the probabilities of contrast-induced nephropathy were considered. Recent meta-analyses have shown negligible incidence of contrast-induced nephropathy for either iso-osmolar or lowosmolar CM, even in the population at risk undergoing CT scanning [10,11].

Cost assignments for the decision tree are separated into clinical management and healthcare resource allocation and unit costs (see Tables 1 & 2). 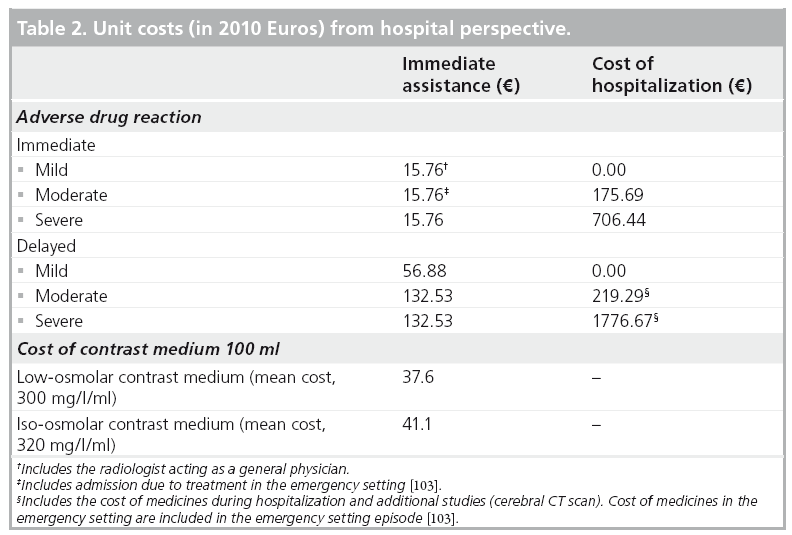 The incremental cost–effectiveness ratio (ICER) was defined as:

To evaluate the effect of uncertainty, a deterministic sensitivity analysis was performed modifying the variables of the base case that may affect the results (e.g., overall incidence rates of ADRs and clinical management of delayed ADRs). The most and least favorable scenarios for each iodinated CM were considered. 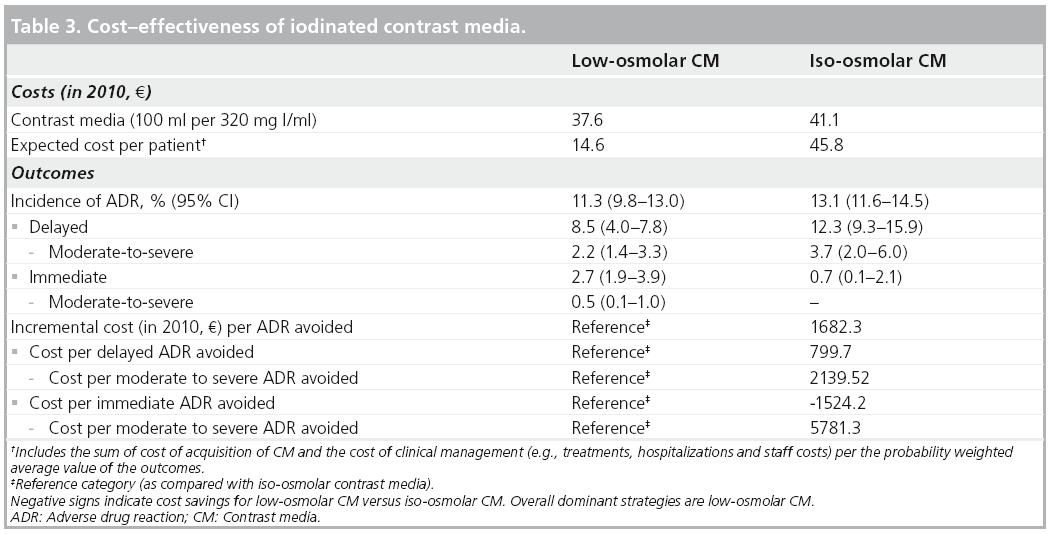 In the sensitivity analysis, in which the overall incidences of ADRs were modified, ICER values ranged between €870.3 and €1749.6 per ADR avoided. In relation to urgent treatment of delayed ADRs in primary care, ICERs ranged between €285.4 and €814.5 (Table 4).

Results of the present study indicate that in the general population and from an inpatient hospital care perspective, low-osmolar CM were more efficient than iso-osmolar contrast agents, in part owing to their lower cost and the lower incidence of delayed ADRs (dominant strategy). Previous pharmacoepidemiological studies have shown differences in ADRs between low- and iso-osmolar CM [5]. Accordingly, low-osmolar CM would cause more immediate ADRs but fewer delayed ADRs, whereas the opposite situation may be expected for iso-osmolar CM. Lapi et al. also reported a higher risk of immediate reactions occurring for low-osmolar CM (iopromide, iomeprol or iobitridol; odds ratio: 4.3, 95% CI: 1.2–15.7), whereas the risk of delayed ADRs was significantly higher for iso-osmolar CM (iodixanol) (odds ratio: 1.8, 95% CI: 1.1–2.5) [5]. In the study by Schild et al., delayed cutaneous adverse events were noted significantly (p < 0.05) more often in the iso-osmolar group [12].

There is evidence that type IV allergic manifestations mediated by T lymphocytes are involved in CM-induced cutaneous allergy [13], but the pathogenesis of other CM reactions remains unclear and etiology appears to be multifactorial in most individuals. Moreover, a relationship between physicochemical properties of iodinated CM and the occurrence of immediate or delayed ADRs has not been established [4,5], so better knowledge of factors that may increase the likelihood of ADRs may be essential in terms of clinical evaluation. It has been shown that ADRs are more frequent in patients who have had an ADR in the past, although there is no known premedication regimen that can reliably eliminate the risk of ADRs [13,14]. A systematic review of pharmacological prevention of serious reactions to iodinated CM concluded that life-threatening anaphylactic reactions due to iodinated CM are rare [14]. In unselected patients, the usefulness of premedication is doubtful, as a large number of patients need to receive premedication to prevent one potentially serious reaction [13]. Moreover, the possible side effects of premedication (corticosteroids) should be taken into account [14].

The sensitivity analysis confirmed the robustness of the results. Regarding variations in the incidence of ADRs, results are not substantially different to values estimated for the base case. On the other hand, in relation to treatment of delayed ADRs (which usually occur between 1 h after injection and the next 7 days), it was considered reasonable that these cases can be treated as an urgent episode in the primary care setting, although the cost for this type of care is lower than in the hospital setting and all costs of treatment are therefore lower. Results again showed that low-osmolar CM continue to be the most cost-effective strategy. Another advantage is the presence of excluding alternatives without the problems related to compatible treatments [15].

Results of the present study should be interpreted taking into account some limitations [16]. One limitation of our findings is the fact that the study population was simulated based on an epidemiological study in the Italian population, assuming data on effectiveness can be generalized to adult patients undergoing CT scanning in south European countries, such as Spain. Secondly, different diagnostic techniques using CM were assessed in previous economic analyses. However, these studies were limited to patients at high risk of ADR and only highosmolar CM have been evaluated [17]. Highosmolar CM, a marginally beneficial technology and inefficient from a cost–effectiveness perspective [18], were not considered because these agents are rarely used in the services of radiology despite their advantageous cost. Thirdly, a time-motion analysis was not performed to account for the time during which the CT room was occupied. Time-motion analysis was only used for CT studies in a comparison of costs of transportable versus fixed platform CT scanners [19]. On the other hand, only direct costs were evaluated. The small number of ADRs indicates a very low weight for work losses compared with healthcare expenditures. This point, however, should not affect the results obtained and conclusions of the analysis [20]. On the other hand, the cost data source was the rates published for the Spanish NHS, which may differ from the actual costs. This is also applicable to the unit costs of the iodinated contrast, which may vary according to private offers or agreements unrelated to the official prices. Finally, it was assumed that the whole process was paid by the hospital. The perspective of the private healthcare was not considered either in the sensitivity analysis. In the case of different prices, the overall cost will be reduced but differences between low- and isoosmolar CM will persist since these are inherent to the physicochemical properties of the substances [3,4].

It should be noted, however, that for iso-osmolar CM (the arm that contained only half the number of patients investigated in the low-osmolar CM group) no immediate reaction of moderate or severe intensity was noted in that registry. Given all knowledge on CM safety, the resulting incidence of 0.00% is probably an underestimation of the true incidence rate [4,12]. This fact actually strengthens the general conclusion of our investigation as it likely reduced the gap between low-osmolar CM and iso-osmolar CM regarding the cost for the treatment of immediate delayed reactions.

The current economic crisis is obliging all developed countries to stabilize healthcare expenditure that has risen over the past decades. Any generalized contraction in health expenditure is not socially desirable and governments are committed to reducing wastage of resources and encouraging access of cost-effective interventions [21]. The true value of healthcare is the benefits (e.g., alleviation of symptoms, functional recovery) that could have been achieved if economic resources were applied to the best alternative. Therefore, cost–effectiveness analyses may help clinicians to decide without having to assess all services of the NHS, in this case, CT diagnostic studies.

Low-osmolar CM are efficient owing to their lower cost and lower relative risk of delayed ADRs, the treatment of which is more costly.

The administration of CM will be more tailored to the patients’ individual characteristics according to BMI. Adequacy of faster imaging equipment where the speed of image acquisition will allow the administration of a lower amount of contrast in a greater volume of physiological saline may also be expected. Moreover, progress in relation to contrast-induced nephropathy will be also taken into account since currently there are no differences between iso- and low-osmolar CM. The lower dose of CM administered for the aforementioned reasons will be associated with a lower incidence of this type of complication. In addition, this lower dose of CM will reduce the cost per patient and hopefully the expected reduction of adverse events will make more cost-effective the study of patients with respect to the present time.

The authors are indebted to J Oliva and J Puig-Junoy for the valuable advise and critical assessment.

The authors have no relevant affiliations or financial involvement with any organization or entity with a financial interest in or financial conflict with the subject matter or materials discussed in the manuscript apart from those disclosed.

Writing assistance was utilized in the production of this manuscript and was provided by M Pulido and Content Ed Net Communications. 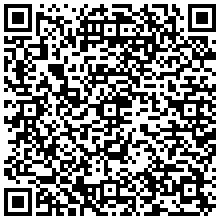