Objective: The aim of the project is to determine influence of intravenous prophylactic hydration on serum creatinine (SCR) levels changes in healthy subjects who have been hospitalized (without iodine contrast administration). The project also aims to compare the effects of intravenous hydration on the SCR levels in subjects with and without iodine contrast administration. Existing data in this regard are very scarce.

Materials and Methods: We used retrospective clinical as well as laboratory data from 391 patients. 50 healthy subjects were included in the EXPERIMENTAL group. They were intravenously hydrated before surgical treatment of hernia iunginalis. SCR were measured at admission and 24 h later. The remaining 341 subjects (CONTROL group) underwent elective coronary angiography/ angioplasty, received a prophylactic hydration and had serum creatinine concentration measured prior to and 12-18 h after the invasive procedure with iodine contrast administration.

Conclusion: After 24 h intravenous hydration in healthy individuals, can lead to serum creatinine increase, probably due to over diuresis (we may only speculate that). This effect is significantly less frequent in patients exposed to intra-arterial iodine contrast administration with the same dose and manner of prophylactic irrigation.

Iodine contrast may disturb renal function. This phenomenon was for the first time described in the 1950s [1]. Contrast induced nephropathy (CIN) is currently defined as a specified serum creatinine (SCR) increase in 24-48 h after iodine contrast administration [2,3].

Intravenous hydration during 24 hour periprocedural period is recommended as a CIN preventive procedure [4]. Intravenous hydration should result in lowering creatinine levels in control measurements due to dilution effect. In our own study it was found that, despite irrigation, creatinine concentration in 12-18 h after the scheduled angiography was unchanged or even increased in up to 25% of patients [5-7]. Patients with improper hydration were excluded. After this, it turned out that the increase in creatinine concentration at the control point was significantly more frequent in patients with baseline lower SCR levels than in subjects who experienced a decrease in SCR concentrations 12-18 h after angiography [8]. The etiology of this phenomenon remains unknown. Perhaps the effect could be explained by high daily variability of creatinine concentrations in hospitalized patients [6,9]. This variability is so relevant that acute kidney injury (AKI)-criteria [6,9] is fulfilled between 5% till up to 30% of subjects. Existing data in the literature are very scarce in this regard. So, the current project aims to determine influence of intravenous prophylactic hydration on serum creatinine (SCR) levels changes in healthy subjects who have been hospitalized (whom iodine contrast had not been administrated). The project also aims to compare the effects of intravenous hydration on the SCR levels in subjects with or without iodine contrast (IC) administration.

Protocol of the study was approved by local bioethics committee (nr 965/14 and 1201/16). All patients were informed about the procedures and signed the consent form.

The study was four center and retrospective. Analyses were carried out with data from consecutive 391 subjects. 50 patients admitted to hospital for surgical treatment of hernia were included in the EXPERIMENTAL group. They were hydrated (20 ml/kg/24h) intravenously with saline enriched with 0.038 g/100 mL of KCl, 0.0394 g/100 mL of (CaCl2·6H2O), 0.02 g/100 mL, (MgCl2·6H2O), 0.462 g/100 mL (CH3COONa·3H2O), 0.09 g/100 mL (C6H5Na3O7·2H2O) (Fresenius Kabi, Poland), before surgical procedure. They had blood collected at admission, and after the hydration for basic biochemical parameters (including creatinine). Various clinical complaints were collected from medical records and clinical examination.

The CONTROL group consisted of 341 consecutive patients admitted for elective, routine coronary angiography. Subjects with acute coronary syndrome or who had acute coronary syndrome less than 5 weeks earlier were excluded, as well as people suffering from heart failure according to NYHA III-IV classification and those with reduced ejection fraction, i.e. below 30%. Various clinical complaints were collected from medical records and clinical examination.

The characteristics of consecutive 341 subjects from CONTROL group and the protocol for methodology were described in our previous publication [8]. Patients were hydrated intravenously the same way as EXPERIMENTAL group. All patients finish intravenous periprocedural irrigation at the same time, but the angiographies were performed in different time point of the hydration procedure.

The binomial tests were used for comparing the frequency of lack of SCR decrease in control measurement point between study and CONTROL group.

Statistical significance was set at p<0.05. All analyses were performed with Statistica 7.0 (Statsoft, USA) and SPSS-20 (IBM, USA).

The study contains 391 patients who were divided into STUDIED and CONTROL group.

Characteristics of the experimental group

EXPERIMENTAL group consisted of 50 people (27 men, 23 women) in mean age (47.7 ± 14.9 years). The basic characteristics and comparison with CONTROL group is provided in Table 1. Patients were hydrated intravenously with 1500 ± 0 (mL) of saline. Intake of 1500 (mL) of liquids per person was recommended to all subjects; actual intake was not measured.

Evaluation of creatinine concentrations in the experimental group 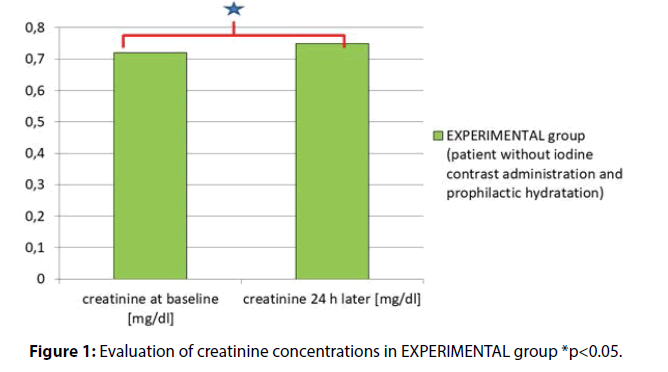 Characteristics of the control group

On average, patients received 110.2 ± 57.4 (ml) of contrast (coro + PCI). The precise characteristics with regard to laboratory parameters and medical records, classified by gender and comparison to EXPERIMENTAL group is introduced in table 1. To summarize basic characteristics, the CONTROL group was significantly older, had higher BMI, lower potassium level at admission and had higher serum creatinine concertation at admission as well as in the second measurement time point.

Patients were hydrated intravenously with 1637.4 ± 239.6 (ml) of saline. Intake of 1500 (ml) of liquids per person was recommended to all subjects, actual intake was not measured.

77.4 % of all subjects were receiving angiotensin converting enzyme inhibitors (ACE - i), 11.7% angiotensin receptor blockers (ARBs), 86.2 % beta-blockers (BB). Diuretics and statin lowering drugs were given to 43.5 and 94.4 % of patients, respectively.

Evaluation of creatinine concentrations in the control group 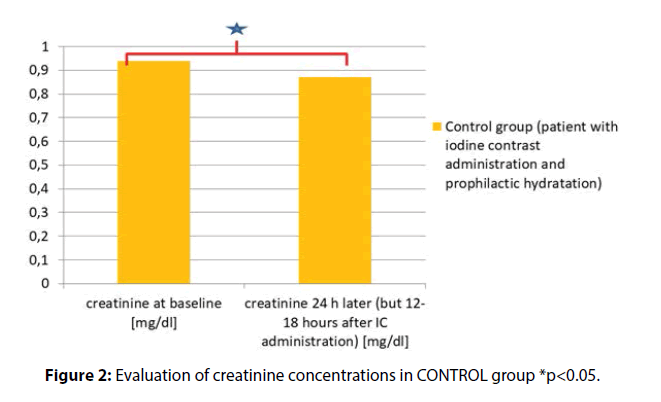 CIN criteria do not take into account preventive hydration, they are arbitrarily accepted, and their fulfillment requires long time-tested serum creatinine concentrations, because more sensitive new markers even though faster, are unfortunately less specific in this regard [3,4].

Therefore, attempts (based on early postporcedural SCR measurement) are made to assess CIN- risk in hope that this will allow for faster implementation of appropriate nephroprotetctive treatment [9,10]. It was found in our previous project, that those who expressed lack of SCR reduction after iodine contrast administration despite prophylactic hydration, had better renal function at admission than those who had a reduction in SCR at the second measurement point. [8]. There are no reports in the literature that would describe similar phenomenon. However, trying to explain this, it is necessary to refresh the knowledge of the pathophysiological impact of iodine contrast on renal function. IC induces the effect of both renal core hypoxia and cortical hypoxia, due to its high osmolarity [11-14]. At the same time IC can be toxic to the nephron as well as for renal interstitium [11,12,15,16].

In the available literature, there are only a few reports describing increased tolerability of coexisting kidney ischemia and toxicity, in a situation where these events have been reported before (kidney preconditioning). One can only speculate that similar circumstances were observed in our previous project in prophylactically irrigated subjects undergoing iodine contrast administration [17].

Patients whose serum creatinine concentration had decreased 12-18 h after coronary angiography/ angioplasty were significantly older and were initially (at admission) characterized by higher SCR and lower glomerular filtration rate [8]. Therefore, theoretically, the function of their kidneys was somewhat worse at the beginning than in those who developed SCR increase at the same control measurement point (12-18 h after invasive procedure) [6].

To clarify our doubts it was necessary to assess the effect of intravenous hydration on SCR changes in hospitalized patients who had not been administrated with iodine contrast. Then, the obtained results were compared with those collected from prophylactically irrigated subjects where IC was administrated during routine angiography.

The CONTROL group (with IC administration) had higher incidence of diabetes, myocardial infarction, heart failure and chronic kidney disease history. It is explained by their significantly higher age, and higher BMI. All mentioned features were responsible for higher serum creatinine concertation at admission as well as in second measurement point. Additionally the CONTROL group had lower potassium level at admission (probably due to higher diuretics intake).

In patients awaiting for inguinal hernia surgery (EXPERIMENTAL group), intravenous hydration resulted in SCR elevation and GFR reduction at the control measurement point in up to 74% of subjects.

This result was also significantly different from that obtained from the CONTROL group. Description of such phenomenon in literature are scarce but there are several plausible explanations for them [2].

First, intravenous hydration alone may have a strong diuretic effect [2], but there are lacking data confirming and evaluating the effect and its magnitude and influence on SCR measured in 24 h after hydration. The mechanism of this phenomenon is probably associated with an increase in the effective blood volume and blood pressure (RR). High RR causes high perfusion pressure in the kidney and increases glomerular filtration, which finally increases the sodium and water excretion in the distal nephron [18]. In addition, high blood pressure extends the left atrium walls, which in consequence inhibits the activation of the aortic glomus cells (aortic body), resulting in decreased release of antidiuretic hormone, finally leading to reduction of sodium (natriuresis) and water (diuresis) reabsorption in distal nephron [19]. These actions additionally inhibit renin-angiotensin-aldosterone loop [20]. Secondly, hospitalization is a stress-relieving factor for patients [2]. Historical clinical observations suggest that stress in some situations may increase urinary output from 200% to 500% [21,22]. The mechanism of this phenomenon is similar to that previously described (in the context of increased blood volume), but the triggering agent is an adrenergic response. Theoretically, dehydration of the organism in a situation of severe stress is secondary to increased diuresis.

Obviously, patients from both the experimental group as well as from the CONTROL group were hospitalized, but the circumstances in which blood was taken for repeat creatinine measurements were different. In the CONTROL group it was done several h after the invasive procedure, whereas the blood in the experimental group was obtained after hydration but several h before the surgery. Thus, if the circumstances of periprocedural hydration were almost identical, then the stress conditions were in both groups incomparable (high stress in the EXPERIMENTAL group, low in the CONTROL group).

Hence, the effect of stress, increased diuresis and secondary dehydration in the EXPERIMENTAL group could have a significant impact on the obtained results.

The basic characteristics did not explain differences between studied and CONTROL group. The groups did not differ in scope of liver disease, but of course the higher incidence of diabetes, higher BMI, higher age in CONTROL group should be take into account as an important circumstance dealing with obtained results [23]. The only contrast media used in the CONTROL group was ionic, so the various saline influence on creatinine levels due to ionic and non-ionic media contrasts administration should be omitted. The important limitation of the study is lack of body weight loss, and diuresis volume monitoring [24]. Additionally, influence of specific nutritional diets maintaining liver function on serum creatinine levels and kidney disease in individuals with or without iodine contrast administration was not explored in the project, but it should also be take into account as a potential factor affecting the study results [25,26].

In conclusion, intravenous hydration in healthy individuals, secondary to hyperuricemia (we may only speculate that), can cause an increase in serum creatinine levels after 24 h in repeat SCR measurements. This effect is observed significantly less frequently in patients with identical to dose and manner prophylactic way of irrigation but exposed to intra-arterial iodine contrast injection. Of course, our findings require a large prospective study that is currently being conducted at our facility

No conflict of interest is declared.