RA is a systemic autoimmune disease characterized by inflammatory synovitis and progressive joint destruction, which are associated with severe disability and increased mortality [1]. The management of RA rests on several principles; non-pharmacological measures such as physical, occupational and psychological therapeutic approaches, and drug treatment, which comprises non-steroidal antiinflammatory drugs, glucocorticoids, Disease Modifying Anti Rheumatic Drugs (DMARDs), biological therapy all together may lead to therapeutic success [2].

MTX is an antifolate and antimetabolite; thereby inhibiting synthesis of purines and pyrimidines and decreasing DNA and RNA synthesis that is used extensively in the therapy of leukemia, lymphoma and several solid organ tumors. It also has potent activity against psoriasis and has immunomodulatory activity against inflammatory arthritis [3]. MTX is now the most popular anchor cornerstone drug for the treatment of RA worldwide. Low-dose, weekly MTX (10 to 25 mg/week) used as either monotherapy or in combination with other drugs as other DMARDs, biologic therapy or targeted biological therapies. It has a superior efficacy profile comparable with other drugs [4]. MTX is well tolerated; gastrointestinal toxicity is the most common toxicity with rarely bone marrow, lung, or liver toxicity [5].

Long term therapy with MTX has been associated with development of fatty liver and hepatic fibrosis and in rare instances portal hypertension and symptomatic cirrhosis. Symptoms are usually absent until cirrhosis is present and liver tests are typically normal or minimally and transiently elevated. Routine monitoring of patients with regular liver biopsies done at 1 to 2 years’ intervals or with cumulative MTX doses of 1 to 10 grams demonstrates that approximately 30% of patients develop mildto- moderate histological abnormalities and 2 to 20% of patients develop some degree of hepatic fibrosis [6].

Liver biopsy is the standard method for diagnosing liver fibrosis, but it may be associated with significant morbidity and mortality of up to 0.33% thereby limiting its use. So, the noninvasive markers of hepatic fibrosis such as serial platelet counts, serum PIIINP, serum bile acids, hepatic ultrasound and advanced imaging techniques may be more efficient in screening for fibrosis in patients on long term MTX [3].

The excess production of Extra Cellular Matrix (ECM) in Hepatic Stellate Cells (HSCs) and Disse’s space leads to the process of liver fibrosis [7]. The largest component of the ECM in liver is collagen type III [8]. During the synthesis of type III collagen, the N-terminal propeptide of procollagen type III (PIIINP) is detached from procollagen type III, so the fibrogenesis results in release of ECM fragments into the blood. So, the level of PIIINP in serum can be a direct indicator of collagen synthesis and its deposition in the extracellular space [9,10]. Increased amount of PIIINP may indicate the transformation of normal liver tissue into fibrous tissue [8].

Aim of the work

The aim of the study is to evaluate the reliability of serum PIIINP in screening for hepatic fibrosis induced by long term MTX therapy in rheumatoid arthritis patients.

This study is a randomized cross-sectional case study, conducted on 90 RA patients diagnosed according to the ACR/EULAR classification criteria of RA [11] attending the outpatient clinics and inpatient of Rheumatology Department of Ain Shams University Hospitals. Patients having HCV or any other risk factors for fatty liver disease, including obesity, diabetes and concurrent administration of other potentially hepatotoxic agents were excluded. Subjects enrolled in the study were divided into two groups; group I included 60 RA patients who were on MTX therapy, Group II include 30 RA patients on other medications.

All patients were subjected to full history taking; rheumatological examination and laboratory investigations after informed written consent approved by the Research Ethics Committee of the Faculty of Medicine, Ain Shams University were obtained.

Data were analyzed using Statistical Program for Social Science (SPSS) version 24.0. Quantitative data were expressed as mean ± Standard Deviation (SD). Qualitative data were expressed as frequency and percentage. Independentsamples t-test of significance was used when comparing between two means. Mann Whitney Test (U test) was used to assess the statistical significance of the difference of a non-parametric variable between two study groups. Chisquare test was used when comparing between qualitative data. ROC Curve was used to detect cutoff value, sensitivity, specificity, Positive Predictive Value (PPV) and Negative Predictive Value (NPV). Fisher’s exact test was used to examine the relationship between two qualitative variables when the expected count is less than 5 in more than 20% of cells. Correlation analysis (using Pearson's method) to assess the strength of association between two quantitative variables. Spearman’s correlation coefficient measures the strength and direction of association between two nonparametric ranked variables. Regression analysis is also used to understand which among the independent variables are related to the dependent variable, and to explore the forms of these relationships. P <0.05 was considered significant. 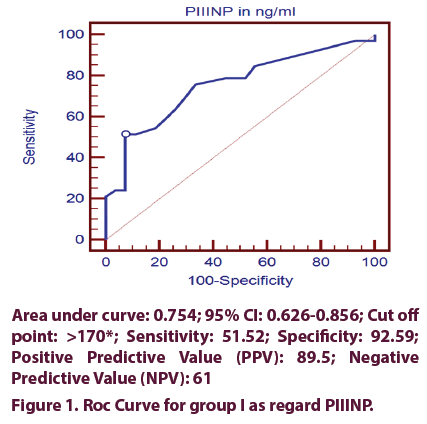 Figure 1: Roc Curve for group I as regard PIIINP.

Table 3. Correlation study between PIIINP and all studied variables in group I.

Rheumatoid arthritis is a multifactorial chronic, progressive inflammatory autoimmune disease associated with articular, extra-articular and systemic effects. It has been reported that RA affects 1% of the adult population of developed regions. Although some patients have mild self-limited disease, many experience joint destruction, severe physical disability and multiple co-morbidities [13]. Mortality rates are more than twice as high in patients with RA as in the general population [14]. Although the exact cause of RA remains unknown, recent findings suggest a genetic basis for disease development. Pro-disease factors include smoking (especially in individuals with HLADR01/04) and other pulmonary exposures such as silica dust, vitamin D deficiency and obesity. Various immune modulators (cytokines and effector cells) and signaling pathways are involved in the pathophysiology of RA [15].

Therapy with DMARDs should be started as soon as the diagnosis of RA is made. MTX is classified as a small molecule Disease Modifying Anti- Rheumatic Drug (DMARD) [16,17]. MTX can cause transient elevated liver enzymes in 10-43% of RA patients that can resolve with temporary drug discontinuation. Recommendations to monitor and diagnose liver damages induced by MTX in inflammatory disorders vary according to the disease. Liver biopsy, which is considered as the gold standard for fibrosis assessment, is invasive, painful, can expose the patient to life-threatening complications and is poorly accepted. Therefore, there is a need for accurate non-invasive methods and more recent approaches include routine biochemical and hematological tests as well as surrogate serum fibrosis markers [18,19]. As an alternative to liver biopsy, noninvasive serological markers of liver fibrosis are now in use, such as PIIINP. The British Association of Dermatologists’ guidelines recommend the use of PIIINP in adults prior to initiating MTX treatment and at 3-monthly intervals throughout the treatment period [20]. The aim of the present work is to evaluate the reliability of PIIINP in screening for hepatic fibrosis induced by long term MTX therapy in rheumatoid arthritis patients.

In the present study, there were significantly higher MCV, AST, ALT, FIB-4 score and PIIINP level in MTX intake group (group I) compared to patients on other medications (group II) (p<0.05). As regard MCV, this result was agreed with the Weinblatt and Fraser [21] study who found that sustained elevation in the MCV may be a predictor of impending hematologic toxicity due to folate depletion RA on MTX therapy. And as regard AST, ALT, FIB score our data was in concordance with Miyata et al. [22] who found that AST, ALT and FIB-4 score were significantly increased with increasing the cumulative dose of MTX in RA patients, also he concluded that FIB- 4 score is simple to calculate and a valuable marker to diagnose liver disease in RA patients on longterm MTX therapy.

We also found that the serum level of PIIINP was significantly higher in RA patients on MTX therapy compared to RA patients on other medications by using ELISA technique, this was also confirmed by the ROC curve which showed that high degree of both sensitivity and specificity in group I (at >170 PIIINP). This result was in accordance with the studies carried out by Nøjgaard et al. [23]; Rosenberg et al. [24]; Chalmers et al. [25]; Bath et al. [26]. They established that an algorithm combining serum markers for liver fibrosis including PIIINP can be used in a wide range of chronic liver diseases to identify patients who have no or little fibrosis, distinguishing them from those with clinically significant hepatic fibrosis. They have concluded that the risk of patients developing hepatic fibrosis is negligible if the PIIINP remains consistently normal; whereas if serial PIIINP measurements are persistently elevated there is a significant risk that hepatic fibrosis is present. Contradictory to this Lynch et al. [27] stated that Serum PIIINP levels may be a less reliable marker of liver fibrosis in these patients because elevated levels may be related to active joint disease. Also, Gressner et al. [28] emphasized that PIIINP is not a liverspecific biomarker, since elevations are known in lung fibrosis, acromegaly, rheumatoid diseases, chronic pancreatitis, and others.

All the previous data confirmed by the presence of significant positive correlation between PIIINP level and disease duration, MTX intake duration, MTX current dose & cumulative dose, MCV, AST, ALT, AST/ALT, FIB-4 score, and also there was a highly significantly positive correlation between cumulative MTX dose and FIB-4 score and PIIINP level. As regard disease duration this result was agreed with Eberhardt et al. [31] who stated that PIIINP level markedly higher than in patients with RA with longer duration. As regard MTX duration and dose our results agreed with Maurice et al. [32], who recommend the measuring of PIIINP serially especially in patients on low dose long term MTX instead of liver biopsy for early detection of liver fibrosis. As regard AST, ALT, AST/ALT, and FIB-4 score, Castera [33], found that PIIINP correlated with aminotransferase levels in acute hepatitis which reflects the degree of fibrosis. These data also go in accordance with Parsian et al. [34], who stated that an increase in serum laminin and PIIINP concentrations above the predictive value is associated with liver fibrosis. In addition, the values of the AST/ALT ratio, Age platelet index, AST to platelet ratio index (APRI), FIB-4 and Fibro Q score and serum laminin and PIIINP levels for discrimination between patients with liver fibrosis and healthy individuals are in the same order. But there was negative correlation between PIIINP level and folic acid that prove the protective role of folic acid in patients on MTX therapy, but we didn’t find other studies study this data. But many studies found that folic acid use reduces toxic effects and improves continuation of MTX therapy and compliance without reducing the MTX efficacy [35]. Regression analysis showed that the FIB-4 score was independent predictor for increasing PIIINP levels and this mostly in concordance with Cheah et al [36], who found a good performance of FIB-4 score in the prediction of mild to moderate fibrosis in Non- Alcoholic Fatty Liver Disease (NAFLD).

PIIINP can be used as screening noninvasive marker for hepatic fibrosis induced by long term MTX therapy in rheumatoid arthritis patients and it is positively correlated with AST/ALT ratio, FIB-4 score and cumulative MTX dose. Folic acid is protective against liver fibrosis in RA patients on MTX therapy.

This research did not receive any specific grant from funding agencies in the public, commercial, or not-forprofit sectors..