Objectives: To investigate whether an index procedure complete revascularization approach is associated with increased risk of CIN in diabetic elderly patients presented with STEMI and multi-vessel disease.

Methods: This study enrolled 140 diabetic elderly patients with acute STEMI and at least one non-culprit lesion, randomized to either complete revascularization (n=70) or culprit-only treatment (n=70). Complete revascularization was performed at the time of Primary Percutaneous Coronary Intervention (PPCI). The primary endpoint was the incidence of CIN or renal dialysis at one month.

Results: A complete revascularization approach was significantly associated with higher risk of CIN (21.4% vs. 7.1; p=0.01), with no significant difference in the other endpoints of mortality, renal replacement therapy, major or minor bleeding between the groups.

Primary Percutaneous Coronary Intervention (PPCI) is the cornerstone management of ST-segment Elevation Myocardial Infarction (STEMI) [1-3]. Around one third of these patients experience multi-vessel affection with significant Non-Infarct Related Arteries (N-IRA) lesions at the time of primary intervention [4,5]. Randomized trials and meta-analyses [6-11] had suggested that a complete revascularization approach is associated with better outcomes in STEMI patient and Multi-Vessel Disease (MVD), however, total revascularization is always associated with higher amount of contrast leading to higher risk of Contrast induced nephropathy which occurs within 48-72 hours after administration of iodinated Contrast Media (CM) [12].

CIN is the third most common cause of hospital acquired acute renal injury representing about 12% of the cases. The incidence of CIN varies from 0 to 24% depending on the patient’s risk factors [13-15]. Patients who develop CIN have greater complications, a worse prognosis, more serious long-term outcomes, and longer duration of hospital stay, which result in elevated medical costs [16,17].

This study was done to assess the incidence of CIN in diabetic elderly STEMI patients with MVD.

We included 140 consecutive diabetic patients ≥ 60 years old, diagnosed as acute ST elevation myocardial infarction and were planned for primary PCI in the period between February 2018 and March 2020. We enrolled patients during this specified recruitment period, a sample size calculation was not performed.

Patients were randomly assigned to either group using a block randomization to either culprit-only or complete revascularization and pretreated with oral anti-platelet (according to the current guidelines recommendations for this specific age group) with oral hydration and intravenous pre-hydration with NaCl 0.9% (normal saline) infusion 1-1.5 l/kg for 12-24 hours as a reno-protective measures according the European Society of Cardiology published updated guidelines on CIN [18], with strict fluid balance and urine output follow up. According to operators’ decision PPCI could include thrombus aspiration catheter, circulatory support or positive inotropes, heparin, or glycoprotein IIb/IIIa inhibitor (GPI) unless clinically contraindicated. The IRA was treated first then complete revascularization was performed at the same sitting of angiographically significant N-IRA lesions.

If randomized to culprit only treatment, patients were subjected to either medical treatment and follow up or planned PCI for the N-IRA after at least 14 days with or without Fractional Flow Reserve (FFR) assessment according to operator’s opinion. Drug- Eluting Stents (DES) were used in all patients for both IRA and N-IRA lesions.

Laboratory investigations were done for all patients including serum creatinine level, CBC on admission and daily until discharge, Troponin T on admission and 6 hours after, and also CK-MB levels every 6 hours till normalization, echocardiography during the hospitalization to assess left ventricular ejection fraction using Simpson’s method.

Written consent was obtained from each of the 140 patient and the study protocol was reviewed and approved by Egyptian research ethics committee.

Post discharge follow-up was conducted at 6 months for adverse clinical events either by clinic-visit or phone calls. The secondary endpoints included the occurrence of Major Adverse Cardiac Events (MACE); all-cause mortality, recurrent MI, and ischemiadriven revascularization by PCI or Coronary Artery Bypass Grafting (CABG). As well as major bleeding (intracranial bleeding, hemorrhage associated with a drop in hemoglobin of ≥ 5 g/Dl or fatal bleeding; according to Thrombolysis in Myocardial Infarction (TIMI) bleeding criteria) [20].

During the study period, 140 diabetic elder patients who presented with STEMI and multi-vessel disease and planned for primary PCI were randomized to either culprit only (n=70) or complete revascularization (n=70) (Figure 1). Baseline demographic data, including age, gender and cardiovascular risk factors are presented in Table 1. 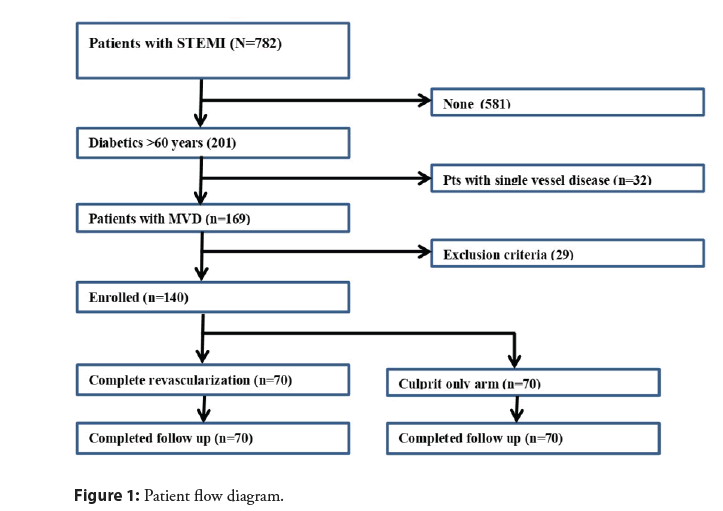 All patients received DES either IRA or N-IRA, use of aspiration thrombectomy or glycoprotein IIb/IIa inhibitor were left to the operator decision according to the case. The proportion with 2- or 3-vessel disease, lesion locations, use of GPI or thrombus aspiration and pain-to-balloon time were similar in each group, however total amount of contrast and fluoroscopy time was higher in the total revascularization group (Table 2).

Serum creatinine significantly increased on the third day and then declined by the 10th day to a level that did not differ significantly from the baseline level in the total revascularization group. No patients in both groups required hemodialysis. Urine output did not show any significant decline in both groups throughout the inhospital follow-up period (10 days). There were no recorded acute ischemic insults during the same period.

All patients completed their follow up at 6 months for incidence of Major Adverse Cardiac Events (MACE) either by phone calls or office visit.

There was no significant difference between both groups regarding the rates of mortality, recurrent MI, ischemia-driven revascularization or total MACE). Only one patient in the total revascularization group needed PCI after 5 months due to recurrence of symptoms with appearance of new significant lesion with rising of cardiac biomarkers. However, in the culprit only group, total of 5 patients underwent revascularization, two of them were admitted with high troponin levels and referred for coronary intervention, and three patients needed PCI due to refractory angina despite optimal medical treatment. There was a higher fluoroscopy time and total amount of dye in the total revascularization group vs. culprit-only group.

There were no differences in procedure related complications, stroke, or major bleeding between the two groups, only 3 cases experienced puncture site hematoma (1 case from the culprit-only group and 2 cases from the complete revascularization group) and were treated successfully. No differences in the ejection fraction during follow up period (Table 3).

CIN represents a significant clinical and health economic problem that may be under-recognised through limitations in the currently available biomarkers. Although often a transient injury, and may progress to significant persistent renal impairment [21].

CIN is considered one of the independent risk factors of Major Adverse Cardiac Events (MACE) in elderly patients above 65 years [22].

Our study is discussing one of debatable topics in a specific risky group of patients; diabetics and elder, presenting with STEMI and multi-vessels disease. Many studies were published discussing this question and had different recommendations. Most of these studies were focusing on the Major Adverse Cardiac Events (MACE), with little concerns on the effect of the strategy of revascularization on kidney, especially in the higher risk groups.

In our study we were collecting 140 diabetic patients ≥ 60 years who presented by STEMI and multi vessel diseases and underwent primary PCI in primary and we revealed that complete revascularization is associated with significantly higher risk of CIN, compared with culprit vessel only PCI in this specific group of patients with no difference in the rates of mortality or total MACE.

Our study showed that complete revascularization in patients presented by STEMI increase the incidence of CIN in comparison to patients who had culprit only revascularization, p=0.016, but not significantly increase the need of renal replacement therapy (renal dialysis or ultrafiltration either during hospital stay or after one month, p=0.15,0.31.

These findings are in agreement with the results of CULPRITSHOCK [23] trial, Culprit lesion only PCI versus Multivessel PCI in cardiogenic SHOCK trial investigated two strategies for Percutaneous Coronary Interventions (PCI) in acute myocardial infarction with cardiogenic shock, focused upon the incidence of needing renal replacement therapy after 30 days or one year, with less concern regarding incidence of CIN, p=0.7. However, the study was only concerning about shocked patients which is different from our study population and inclusion criteria.

In the complete trial [24], Complete revascularization with multivessel PCI for myocardial infarction, the complete revascularizations strategy didn’t statistically increase the incidence of CIN. This difference from our study may be due to different contributing factors, as the mean age of our populations was higher (64.11 ± 5.32 vs. 62.4 ± 10.7) with specific selection of diabetic patients who are of course at higher risk of developing CIN.

Our study showed that complete revascularizations don’t increase incidence of cardiac mortality during hospital stay and after six months follow up. The CvLPRIT Trial also did not show different in mortality between both groups, however demonstrated higher rates of MACE in the culprit only arm, mainly due to repeated revascularization. The CvLPRIT Trial also concluded that complete revascularizations didn’t increase the incidence of CIN but this difference is mainly referred to different patient profile and risk factors than ours.

Our study addressed the incidence of CIN with complete revascularization in diabetic elderly patients who carry a greater risk of renal post-procedural complications. And we found that this selected group of STEMI patients are commonly associated with higher incidence of CIN with no effect on mortality or MACE if compared with culprit only PCI at 6 months follow up.

This study is trying to address the management of a special group of STEMI patient with high risk of CIN, mortality and morbidity to find the best approach to minimize the rates of complications, improving survival with good safety profile.

The current study is a relatively small, relatively short follow up period. However, it investigated a debatable regimen of management of a special group of STEMI patients which are at higher risk of post-procedural CIN.