Immunopharmacological Activity Of Saponin From Terminalia Arjuna And Prosopis Spicigera

Medicinal plants have been used extensively as a source for numerous bioactive constituents for treating human diseases [1]. There are number of phytochemicals that are present in many medicinal plant products and showed its prophylactic as well as therapeutic value [2,3]. These are widely used in the veterinary, agriculture, scientific research etc. Out of these phytochemicals, saponins are generally predominant especially triterpenoids in wild plants and cultivated crops where as steroid saponins are common in plants used as herbs or for their health-promoting properties [4,5].

Saponins are steroid or triterpene glycoside compounds that are present in a variety of medicinal plants e.g., Azadirachta indica [6], Ficus religiosa [7], Ficus benghalensis [8], Prosopis spicigera [9] etc. Several preclinical and clinical studies related to saponins have already been done with respect to various immunopharmacological activities i.e., anti-inflammatory [10], vaccine adjuvants [11], cytotoxic [12] etc. Some in vitro and in vivo experiments in animal model studies that demonstrate the beneficial or harmful effects of saponin are reported or some still under investigation. In view of this, there is an urgent need for systematic evaluation of the most active structural components of the saponins and their interaction with the specific protein antigen including microbial community, the host animal etc. Along with these studies, the direct effects of saponins on human whole blood must be examined in order to get the full understanding of its metabolism and beneficial effects of saponins on human. Knowledge of the chemical constituents of plant is desirable for the synthesis of complex chemical substances.

Terminalia arjuna (evergreen tree; family Combretaceae), versatile medicinal plant in India having a wide spectrum of immunobiological activity e.g., anti-microbial, anticoagulant, antipyretic, astringent, anti-inflammatory, cardiotonic etc [13,14]. Inspite of these activities, many useful phytoconstiuents that are isolated from Terminalia arjuna which included triterpenoids for cardiovascular properties; flavonoids including tannins for anticancer and antimicrobial properties and so on [13,14].

Prosopis spicigera Linn. (Shami; Family Fabaceae; xerophytic and draught resistant plant) showed several immunopharmacological activities i.e., anti-inflammatory, antimicrobial etc [9]. One of the novel alkaloid is reported in this medicinal plant i.e., piperidine-3-ol alkaloid called as spicigerin [9]. The purpose of the study was to find out the anti-inflammatory and antimicrobial activity of crude saponin extracted from the leaves of Terminalia arjuna and Prosopis spicigera.

Fresh mature plant leaves of Terminalia arjuna and Prosopis spicigera were collected from Vidya Pratishthan’s, garden at Baramati. First of all, leaves were washed with tap water in order to remove the pollutants that are present on the surface and then the leaves were dried in a shady area.

Fresh dried shady leaves of Terminalia arjuna and Prosopis spicigera, medicinal plants were collected in order to isolate the crude saponins using this technique i.e., liquid-liquid extraction method. Dried plant (6 g) leaves of both the medicinal plants were macerated in liquid nitrogen and finally macerated and dissolved in phosphate buffered saline (60 mL, pH 7.2) and then filtered it. For the preparation of crude saponin from leaves aqueous extract using diethyl ether, one third volume dissolved in aqueous extract and incubated for 5-10 min. Later on, upper layer containing diethyl ether was discarded (process repeated two times). At the bottom, aqueous layer was retained and add double volume amount of n-butanol and incubate for 5-10 min. Finally, extracts (n-butanol) were bulked together and washed two times using 10 mL of 5% NaCl. Afterwards, washed aqueous extract was concentrated at <70°C in an oven and air dried at room temperature to yield milligrams of crude saponin residue [4,5]. Overall, crude residue of saponin was screened using foaming test.

Virally Infected (major symptoms such as cough, common cold, fever etc.) and noninfected (normal) EDTA blood samples of human were collected from Mangal Pathology laboratory, Baramati for anti-inflammatory and anti-microbial studies. The inclusion criteria for these studies i.e., informed consent letters were collected from potential volunteers in order to separate the human peripheral blood mononuclear cells (PBMC) from healthy volunteers and also from infected person showed such type of symptoms as mentioned above where as exclusion of this study is that non-healthy person was not included in noninfected cases. Inspite of this, our study has been thoroughly explained to all the volunteers.

For immunopharmacological studies, using human PBMC (106 cells/mL, 100 μL) were separated from human whole blood (infected and non-infected blood) by means of Ficoll– Hypaque gradient centrifugation and plated in 96 well plate in presence of Concanavalin A (Con A, 2.5 μg/mL, 50 μL) for 48 h in carbon dioxide incubator (37°C, 5% CO2). After incubation, tissue culture plates were centrifuged at 1800 rpm for 15 min and then the supernatant (100 μL) was collected for analyzing Th1 (IFN-γ and TNF-α) type of cytokines including nitric oxide production and then add equal volume of fresh medium. Afterwards, MTT solution (5 mg/mL, 20 μL) was added to each well and then incubated for 4 h. Again, the 96 well flat bottom plates were spinned or centrifuged at 1500 rpm for 4 min and the supernatant was discarded [3,8-10]. Add DMSO (100 μL) solution to the formazon crystals and the absorbance was evaluated in an ELISA reader at 570 nm.

Th1 (IFN-γ and TNF-α) were measured with an enzyme linked immunosorbent assay (BD optia kit, ELISA) according to the instructions of the manufacturer. This assay employs the quantitative sandwich enzyme immunoassay technique. Human monoclonal antibody for Th1 (IFN-γ and TNF-α) has been pre-coated on to a microplate (96 well, Elisa plate). Standards, control including cell supernatant samples of saponin treated with human PBMC are pipetted into the wells and any human IFN-γ and TNF-α is present is bound by the immobilized antibody. After washing away any unbound substances, an enzyme linked polyclonal antibody specific for human IFN-γ and TNF-α is added to the wells. The enzyme reaction yields a blue product that turns yellow when the stop solution is added. The intensity of the colour measured is in proportion to the amount of IFN-γ and TNF-α bound in the initial step. The sample values are then read off the standard curve. Figure 1: Effect of variable doses of crude saponin on human PBMC using T cell mitogen Con A. PBMC (2 × 106 cells/mL, 100 μL) were cultured in triplicates in 96-well tissue culture plate along with variable doses of crude saponin (0.5-30 mg/mL, 100 μL) extracted from Terminalia arjuna (a) and Prosopis spicigera (b) in complete RPMI 1640 medium in presence of Con A (2.5 μg/mL, 50 μL). Proliferation was measured by MTT assay. Values are expressed as Mean ± S.E. The absorbance was evaluated in an ELISA reader at 570 nm. The difference between the control and treated groups is determined by One way ANOVA test (Bonferroni multiple comparison test). *P<0.05; **P<0.01; ***P<0.001. Figure 2: Estimation of Th1 (IFN-γ and TNF-α) in human PBMC cell culture supernatant. PBMC (2 × 106 cells/ mL, 100 μL) were cultured for 48 h along with variable doses of crude saponin (0.5-30 mg/mL, 100 μL) extracted from Terminalia arjuna and Prosopis spicigera in complete RPMI 1640 medium in presence of Con A (2.5 μg/mL, 50 μL). Supernatant was collected after centrifugation and estimated Th1 cytokines. Values are expressed as Mean ± S.E. The absorbance was evaluated in an ELISA reader at 570 nm. The difference between the control and treated groups is determined by One way ANOVA test (Bonferroni multiple comparison test). *P<0.05; **P<0.01; ***P<0.001. 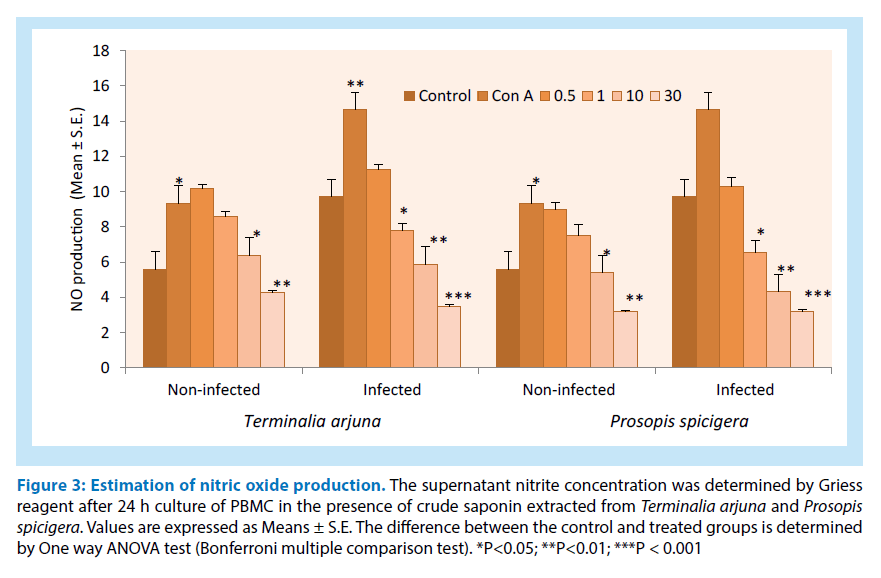 Figure 3: Estimation of nitric oxide production. The supernatant nitrite concentration was determined by Griess reagent after 24 h culture of PBMC in the presence of crude saponin extracted from Terminalia arjuna and Prosopis spicigera. Values are expressed as Means ± S.E. The difference between the control and treated groups is determined by One way ANOVA test (Bonferroni multiple comparison test). *P<0.05; **P<0.01; ***P < 0.001

In the present study, human PBMCs (monocytes and T cells including lesser extent of killer and dendritic cells) are used as a screening assay which is already established in clinical immunology for the last so many years and constitutes one of the important component of peripheral immune system [15,16]. The objective of our study is to provide the relationship between proliferation, estimation of Th1 type of cytokines from cell culture supernatant including nitric oxide production in order to evaluate this in vitro test system for screening of potential antiinflammatory and anti-microbial properties of saponin extracted from aqueous leaves extract of Terminalia arjuna and Prosopis spicigera.

In the present study, T cells were the major proliferating cells in Con A-induced activated PBMCs. Activation and clonal expansion of human PBMCs from infected and noninfected human whole blood which contained mostly T lymphocytes that played a vital role in the generation of immune responses [17]. Number of studies has shown that Th1 (IFN-γ and TNF-α) cytokines are important in the growth of antigen or Con A-induced PBMCs. Thus, the inhibitory effect of saponin from Terminalia arjuna and Prosopis spicigera on Con A-activated PBMC proliferation in case of infected and non infected PBMC might have been caused by the suppression of T cell proliferation. The present study indicated that proliferation of Con A-activated PBMC was significantly inhibited by 30 mg/mL, 100 μL in both these Saponins extracted from Terminalia arjuna and Prosopis spicigera. On the other hand, this study also revealed its inhibitory activity of crude saponin on nonspecific cellular immune response. Although the exact mechanism of this crude mechanism extracted from the leaves of Terminalia arjuna and Prosopis spicigera is not known, it may be mediated by the interaction between the most active components of saponin from these medicinal plants and cellsurface molecules or growth factors involving mitogen (Con A) activation, and it is possible that identification and elucidation of the active constituents in this medicinal plants may provide useful leads to the development of new and effective immunosuppressant drugs.

Immunopharmacological activity of saponin can be measured by detecting the changes in the production of immune molecules such as cytokines and nitric oxide production. To elucidate the saponin biological effect on human PBMCs, our group measured the levels of Th1 (IFN-γ and TNF-α) cytokines using ELISA. Proinflammatory cytokines (IFN-γ and TNF-α) are involved in the regulation of PBMC proliferation [18]. Our results showed that addition of saponin from Terminalia arjuna and Prosopis spicigera significantly declined in the production in Con A-stimulated PBMCs in case of infected and non infected human PBMC. Overall, the data represents that saponin from Terminalia arjuna and Prosopis spicigera showed its anti-microbial and anti-inflammatory activity in case of infected and non-infected human blood samples because PBMCs fail to proliferate due to the suppression of Th1 (IFN-γ and TNF-α) pro-inflammatory cytokines. In contrast, saponin showed less toxicity in case of normal human PBMCs as evaluated by the Trypan blue exclusion method (data not shown). Most importantly, in human PBMC the production of nitric oxide from saponin extracted from Terminalia arjuna and Prosopis spicigera is tightly correlated with the extent of cytokine production. In this study, saponin has the potential to inhibit the nitric oxide production in case of infected and non infected human PBMC stimulated with Con A. For these studies, cell culture supernatant collected from treated group of variable doses of saponin in human PBMC inhibited nitric oxide production at higher doses when activated in vitro with Con A at 48 h after stimulation as compared to control. Overall, nitric oxide assay may be regarded as an efficient, economical and relatively reliable tool in primary screening for anti-inflammatory and anti-microbial activities of saponin in human PBMC. Overall, the results showed its anti-inflammatory and anti-microbial activities.

The present study indicates that crude saponin from Terminalia arjuna and Prosopis spicigera got profound anti-inflammatory and antimicrobial effect and may have potential use in medicine. This novel finding will aid us to conduct bioactivity guided isolation of saponin derivatives and characterized the compounds in due course of time.