Background: Vitamin D is an immunomodulator that plays a role in immunoregulation. Curcumin is also a potential immunomodulator in several autoimmune diseases. Curcumin-vitamin D bonds in VDR have different positions, thus leading to a homologous function with vitamin D and is thought to have a synergic effect if given simultaneously.

Aims: To determine the effect of curcumin supplementation in vitamin D3 adminstration towards proteinuria, serum anti-dsDNA and IL-17 levels in SLE patients with hypovitamin D.

Method: This study is a double blind randomized controlled trial on active SLE patients with hypovitamin D in the Oupatient Clinic of Saiful Anwar General Hospital Malang. This study was held from January 2016-March 2017. Measurement of vitamin D, antidsDNA and IL-17 were carried out using ELISA, while proteinuria was assessed with protein-creatinine ratio (enzymatic-turbidimetric method). Data were analyzed using Spearman correlation test and several comparative tests with a significance of p <0.05; which were Wilcoxon, t-test, Saphiro-Wilk normality test, and Levene homogenity variance test.

One of the manifestations of SLE is lupus nephritis (LN), which usually occurs within 5 years after the diagnosis of SLE. LN patients are at risk to develop end-stage renal failure, so it is a major predictor of morbidity and mortality for SLE patients [1]. Kidney involvement accounts for nearly 60% of SLE population with a higher prevalence in Asians, Hispanics, Native Americans and blacks, and especially in women of reproductive age. LN is characterized by loss of self-tolerance, autoantibody production such as nuclear antigen and immune-mediated injury in the kidney [2]. The main manifestations of LN are proteinuria [3].

Lupus nephritis begins with the presence of anti-dsDNA antibody deposition containing immune complexes in the renal parenchyma. The immune complex is accompanied by complement activation, infiltration of immune cells, release of chemokines, cytokines, proteolytic enzymes and oxidative damage causing inflammation of the kidneys and organ damage. The nefritogenic effect of anti-dsDNA antibodies is caused by gene regulation and protein expression of inflammatory and fibrotic mediators in renal cells. The mechanism of this effect is by direct binding to cross-reactive antigens on the surface of kidney cells or the extracellular matrix components, as well as indirect effects through the nucleosomes that are bound to the glomerular basement membrane [1,4].

From a study conducted by Puspitasari et al in 2012, 84.1% of SLE patients in Malang experienced hypovitaminosis D [8]. Low vitamin D levels have a significant relationship with disease activity, where a lower vitamin D level causes higher disease activity. This is because the role of vitamin D in the regulation of immune response by lowering the response of Th1 and Th17 cells, suppressing the maturation of dendritic cells, decreasing proliferation and maturation of active B cells, and increasing the number of Treg cells [9]. Priyantoro et al., (2014) conducted a study of vitamin D supplementation softgel 3/cholecalciferol 1200 IU/ day or 30 mg/day for 3 months in SLE patients who experienced hypovitaminosis D, and found a significant increased level of vitamin D at 6.55 ± 0.09 ng / mL and decreased levels of anti-dsDNA and proteinuria at post-supplementation [10].

Apart from vitamin D, some studies also suggest that curcumin has a potential as an immunomodulator in autoimmune diseases. Curcumin is a phenolic compound found in many plants such as ginger, turmeric, and Javanese ginger [11]. Curcumin lowers the percentage of Th1, Th2 and Th17 cells and increase the percentage of Treg cells [12]. Curcumin is also a natural ligand for the vitamin D receptor (VDR), and VDR activation is found to be able to induce Treg and inhibit Th17 activation [13,14]. A study by Pratt et al., (2015) in SLE mice found decreased levels of Th17 and increased Treg cells in an administration concentration of 200 mg / kg / day (equivalent to 20 mg/kg/day in humans) [15].

The synergistic nature of curcumin with vitamin D in regulating the immune cells [16-18] reveals new opportunities for researchers to improve the therapeutic response of vitamin D3, improve clinical symptoms, decrease the progression of disease in SLE patients with hypovitaminosis D by means of combining curcumin supplementation with vitamin D. Curcumin addition in the administration of vitamin D3 is expected to decrease anti-dsDNA autoantibody production and the percentage of Th17 cells, which can be seen from the levels of IL-17 serum. The aim of this study is to determine the effect of curcumin supplementation in vitamin D3 adminstration towards proteinuria, serum anti-dsDNA and IL-17 levels in SLE patients with hypovitamin D.

General Hospital Malang by using enzymatic-turbidimetric method with Cobas C311 / 501 (Roche / Hitachi). The examinations were repeated after 3 months of treatment.

Variant homogeneity was tested by Levene test. Saphiro-Wilk test is used to reveal the normality of data, in which data are assumed as normal if the Saphiro-Wilk test resulted in a p>0.05. After this step, parametric statistical test were done (t-test). As for the variables that are not assumed as normal, these variables were tested by non-parametric statistical approach (Wilcoxon test for paired samples). The results are assumed to be significant when the value of p<0.05. Data analysis was done using Statistical Package for the Social Sciences software version 16.0 (SPSS Inc, Chicago, IL).

Data on the characteristics of the study include: age, duration of illness, anti-dsDNA, IL-17, PCR, Hb, TLC, urea / creatinine, SGOT, SGPT, calcium, SLEDAI, and previous medications. Characteristics of SLE patients involved in the study are in (Table 1), where there was no significant difference between the control group and the treatment group.

The relationship between research variables can be tested by using Rank Spearman correlation test. The results were significant (correlation) significant (p<0.05), namely as follows: 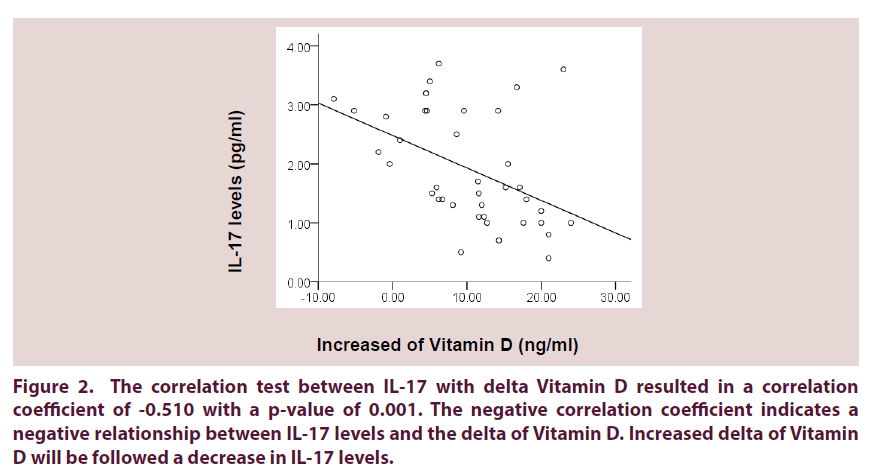 The dosage of 1200 IU/day of vitamin D3 were based on a study by Irastorza (2010), which recommends vitamin D3 with doses higher than 800 IU/day to prevent vitamin D insufficiency [19]. This is also supported also by a study by Priyantoro et al (2015) which uses a dose of 1200 IU of vitamin D3 per day for 3 months, which showed an increase in levels of vitamin D from 3:08 ± 23.89 ng / ml to 30.44 ± 3.16 ng / Ml [10]. However, from that study the initial vitamin D levels were already low. Similar to that study, the mean initial vitamin D levels in the present study indicates a deficiency in both groups. It is possible that this cause a persisting condition of vitamin D insufficiency.

A study conducted by Attar (2013) in SLE patients with hypovitaminosis D showed that there was a negative correlation between vitamin D levels and anti-dsDNA levels, in which lower vitamin D levels will have a higher antidsDNA level [24]. These results are supported by previous studies by Thud et al., Kusworini et al., Terrier et al. and Anna A Kingdom, which found similar results [20,21,25,26]. This is according to a study conducted by Linker (2001), which indicates that there are B cells that express VDR. PBMC incubation in SLE patients with 1,25OH 2 D3 can reduce the proliferation and production of anti-dsDNA derived from B-lymphoblasts and induces apoptosis in active B-lymphoblasts [27]. A study conducted by Terrier (2012) in SLE patients with hypovitaminosis D who received 100,000 IU cholecalciferol per week for 4 weeks followed by 100,000 IU per month for 6 months showed a significant increase in vitamin D levels and decreased levels of anti- dsDNA. Treg was increase in both the percentage and absolute count on resting and activated Treg memory. The increase in Treg is associated with increased expression of molecules such as CTLA4, GITR and LAP [21].

A significant decrease in Th17 is also present, thus indirectly reduce autoantibodies through reductions in B-cell activating factor (BAFF). In the administration of vitamin D, a decrease of IgD - CD27+ and IgD-CD27- B lymphocytes (memory B cells) and anti-dsDNA are also present. This is in accordance with in vitro studies, that 1,25 (OH) 2 vitamin D3 decreases cell B proliferation, plasma cell differentiation and decreased IgG secretion.

One of the manifestations of SLE is lupus nephritis (LN). This kidney involvement accounts for nearly 60% of the SLE population with more prevalence in Asians, Hispanics, Native Americans and blacks, and especially in women of reproductive age. LN characterized by loss of self-tolerance, autoantibody production, like nuclear antigen and immune-mediated injury in the kidney. The main manifestation of NL is proteinuria. This is according to a study by Petri who followed 1006 SLE patients with hypovitaminosis D for 128 weeks who received supplementation of Vitamin D 2 50,000 IU per week with Ca / D3 2×200 IU per day, which showed an increase of 20 ng/ml concentration Vitamin D will lead to a decrease in protein-creatinine ratio of 4% and the likelihood of proteinuria greater than 0.5 grams per 24 hours decreased by 15% [22]. In a study using curcumin by Khajehdehi et al. curcumin was found to have a homologous function of vitamin D, suggesting that in SLE patients with lupus nephritis who relapsed or in a refractory period, administration of curcumin 3×22 mg for 3 months can improve protenuria, hypertension and hematuria without side effects [28].

Curcumin supplementation effect on the administration of Vitamin D3

Despite significant results in elevated levels of vitamin D, decreased anti-dsDNA, protein-creatinine and IL-17 ratios in both groups, both treatment and placebo, no difference in vitamin D levels was found when the two groups were compared. The median results of the increase (delta) in the treatment group were 8.6 (IQR: -0.4-15.2), compared to 11.6 (IQR: 6.32- 17.47) in the control group (p> 0.05). In the control group, vitamin D levels were higher than the treatment group although no significant differences were obtained.

Curcumin is a ligand of VDR (Vitamin D receptor) and has a functional homology with vitamin D. In the administration of curcumin alone without combination with vitamin D, good results are obtained. A study conducted by Lee in mice of lupus nephritis showed that supplementation of curcumin can decrease proteinuria and anti-dsDNA levels of antibodies [30]. This is supported by a study by Khajehdehi et al. in patients with lupus nephritis relapsing or in refractory which indicates that curcumin administration of 3×22 mg for 3 months can improve proteinuria, hypertension and hematuria without side effects.

Another study supporting the results of this study was conducted by Guo (2013), from in vitro results showed that combination of vitamin D with curcumin was not better than vitamin D alone in cathelicidin antimicrobial peptide (CAMP) expression [31].

The addition of curcumin in vitamin D is not better than vitamin D alone. Increased vitamin D levels is correlated with decreased anti-dsDNA and IL-17 antibodies, and provide good results of improvement of proteinuria.