Fenugreek is one of the oldest medicinal plants, originating in India and Northern Africa. The hypoglycemic effects of fenugreek have been attributed to several mechanisms. Under In vitro conditions, the amino acid 4-hydroxyisoleucine(4-OHIL) in fenugreek seeds increased glucose-induced insulin release in human and rat pancreatic islet cells. It was observed that 4-OHILextracted from fenugreek seeds has insulin tropic activity. This amino acid appeared to act only on pancreatic beta cells, since the levels of somatostatin and glucagon were not altered.

Results: Five dipeptides were confirmed by spectral data like IR, MASS, NMR and evaluated for anti-diabetic activity. The studies showed that only GLY-L-4-OHIL showed improved activity than the other derivatives and it is comparable with 4-OHIL.

Diabetes is a lifestyle disorder characterized by high levels of glucose in blood (hyperglycemia) [2]. This metabolic disorder is caused mainly due to insulin deficiency or insulin resistance or sometimes both [3].

Fenugreek is the one of the oldest medicinal plants, originating in India and Northern Africa. As an annual plant, fenugreek grows to an average height of two feet. This plant is locally used in diabetic and non-diabetic people for reducing blood lipids and it also has antioxidant and anti-bacterial activity. This plant is used in therapy of atherosclerosis, rheumatism, sugar lowering, blood lipids lowering and appetizer [4]. The mechanisms by which fenugreek may lower blood glucose levels have not been well established in humans. The effects of fenugreek seeds are mainly due to the gum fraction, but do not exclude a longer term effect of other fenugreek components on glycemia. A novel amino acid derivative extracted from fenugreek seeds, 4-hydroxyisoleucine, stimulated glucose-dependent insulin release in isolated rat and human pancreatic islet cells. In a trial of acute effects in healthy volunteers, trigonelline reduced the early glucose response during an OGTT [5]. In diabetes subjects, fenugreek seeds acts as an anti-diabetic agent by bringing the glycemic control [3,6]. The amino acid present in this plant appear to act only on pancreatic beta-cells, since the levels of somatostatin and glucagon were not altered [4].

4-Hydroxyisoleucine (4-OHIL) is the most commonly found free amino acids in fenu-greek seeds. It occurs in two isomeric forms. The major isomer has a (2S, 3R, 4S) configuration which gives 90% of it in the seeds. While the minor isomer has a (2R, 3R, 4S) configuration and it possess both hypoglycemic & insulin tropic properties in vitro or in vivo. Due to this reason, it has becomea potential candidate for treating diabetes [7].

4-OHILis a branch amino acid extracted from the Fenugreek seeds which are having characteristic smell and bitter taste that of fenugreek seeds and leaves. The extracted natural active chemical is highly hygroscopic. The extract has several constituents. The active compound 4-OHIL is isolated by several purifications. The other constituent steroidal saponins (diosgenin, yamogenin, tigogenin, and neotigogenin) are also isolated separately from the extracts and mucilaginous fiber which are believed to be responsible for many of the beneficial effects fenugreek. The mucilage found in fenugreek does not dissolve but instead swells when mixed with fluids. Since the body cannot digest the mucilage from fenugreek it is believed to be an effective laxative. Medicinally, it was used for the treatment of wounds, abscesses, arthritis, bronchitis and digestive problems. The studies have confirmed the presence of 4-OHILin fenugreek seeds in two diastroisomers: the major one being the (2S, 3R and 4S) configuration, representing about 90% of the total content of 4-OHIL, and the minor one being the (2R, 3R and 4S) configuration. The major isomer is presently interesting with respect to experimental evidence indicating its ability to stimulate glucose-induced insulin secretion in micro molar concentrations. Some studies have also shown that the natural analogue of 4-OHIL is more effective as an anti-diabetic agent than a synthetic version [8,9]. The structure of 4-OHIL is depicted in Figure 1. 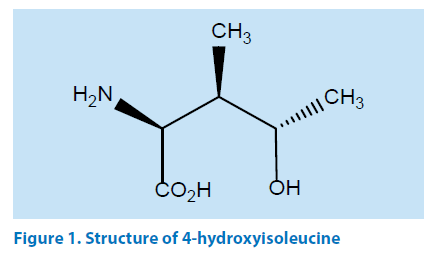 4-OHILin fenugreek extract plays a valuable role in insulin promotion and glucose regulation which may help to reduce body fat [10]. It has nutrient partitioning effect, which means it helps to shuttle nutrients to muscle cells preferentially over fat cells [11]. It appears to be glucose dependent. Higher is the blood glucose level, greater is the insulin promoting response elicited by 4-OHIL. By helping to regulate insulin needs, 4-OHIL works as an adaptogen. It is a non-protein amino acids isolated from fenugreek seeds. 4-OHIL will be more efficient to creatine in the muscle cells to enhance muscle strength and lean muscle mass and increase strength and size of muscle cells.It contains hormone precursors that can increase milk production in nursing mothers and it is widely used for insufficient lactation. 4-OHIL indirectly helps to lower the levels of triglycerides [12]. It has been used to treat bronchitis and asthma. It is also considered as a good herbal remedy for sore throat and coughs. It has been used to promote hair growth both in women and men [13]. It has been used for skin irritation, such as ulcers, boils, eczema, dandruff and cellulite.4-OHIL may help stimulate the secretion of insulin, reduce insulin resistance, and decrease blood sugar levels in diabetes patients [14].

The wavelength of the compounds was measured by UV-VIS spectrophotometer (UV- -Pharma Spec 1700 Shimadzu) [19].

The HNMR Spectra were obtained on a Bruker DRX-400MHZ Spectrometer in CDCl3 using TMS as internal standard and chemical shifts are expressed in δ scale [20].

Scheme for the extraction and isolation of amino acid (4-OHIL) from fenugreek seeds [23]:

Keep it for over night Reagents and conditions of the above mentioned scheme are showed in Table 1.

Gly/Val/Ser/Ala/Thr is dissolved in water and sodium bicarbonate (2eq) using a magnetic stirrer with heating and the mixture was cooled to 5°C and then Cbz-Cl (1.5eq) in paradioxane was added slowly. The resulting mixture is stirred at 0°Cfor 1hour and allowed to warm at room temperature. Then water is added and aqueous layer is extracted 2 times with ethylacetate. The organic layer is back extracted twice with saturated sodium bicarbonate solution. The aqueous layers acidified to a pH of 1 with 10% HCl and extracted three times with ethylacetate and the organic layers were dried and concentrated in vaccum [24,25].

CarbobenzoxyGly/Val/Ser/Ala/Thr4-OHILwas decarbobenzoxylated with HBr in acetic acid. The mixture was added to a round bottomed flask equipped with a stirrer and cooled in an ice bath during cleavage process. The peptide resin was slowly added under inert atmosphere andtemperature, it is allowed to proceed for room temperature with stirring for 3 hours. The mixture is filtered and it was saponified by shaking for 1 hour at 25°C in a solution of 40.5 ml of ethanol and 4.5 ml of 2N aqueous NaOH. The filtrate was neutralized with HCl and saponification step was repeated on the resin with more ethanolic sodium hydroxide for another hour. The resin was washed with ethanol and water and neutralized filtrates were combined. Finally Gly/Val/Ser/Ala/Thr4-OHILwas formed [27].

Anti-diabetic activity of 4-OHIL and its dipeptides like Gly-L-4-OHIL, Val-L-4- OHIL, ALA-L-4-OHIL, Thr-L-4-OHIL, Ser-L- 4-OHILwere investigated by estimating degree of non-enzymatic haemoglobin-glycosylation, measured colorimetrically at 520 nm. Glucose (2%), haemoglobin (0.06%) and Sodium azide (0.02%) solutions were prepared in phosphate buffer 0.01 M to get pH 7.4. 1 ml each of the above solution was mixed and 1 ml of each concentrations of 4-OHIL and dieptides were added to above mixture. Mixture was incubated in dark place at room temperature for 72 h [28-31]. The degree of glycosylation of haemoglobin was measured colorimetrically at 520 nm. Alpha- Tocopherol (Trolax) was used as a standard drug for assay. % inhibition was calculated by using the formulae (Figure 2).

All the tests were performed in triplicate (n=3)

Diabetes was induced by a single injection of Alloxan 60 mg/kg b.w. to rats fasting for at least 16 h through the tail vein in freshly prepared 10 mmol/l sodium citrate, pH 4.5. Blood glucose levels were measured daily 3 days prior and 7 days after alloxan administration [32]. Development of diabetes mellitus was proven by sustained hyperglycaemia and glycosuria (diabetic rats had glycaemia >250 mg/dl) [33,34].

Group I: Normal control animals I that received saline solution, i.p for 21 days.

The rats developed diabetes within 2 days after alloxanisation as evidenced by sustained hyperglycaemia and glycosuria. Only those animals with blood glucose level above 250 mg/dl were included in the study. Every week (from 1st week to 3rd week) on 1st, 7th, 14th, and 21st day, blood samples were collected by retro-orbital puncture under light ether anesthesia, then the serum was separated by centrifugation at 2000rpm for 15 min in a cooling centrifuge and blood glucose levels were measured [35,36]. On 21st day, glucose level was finally measured (Figure 3). 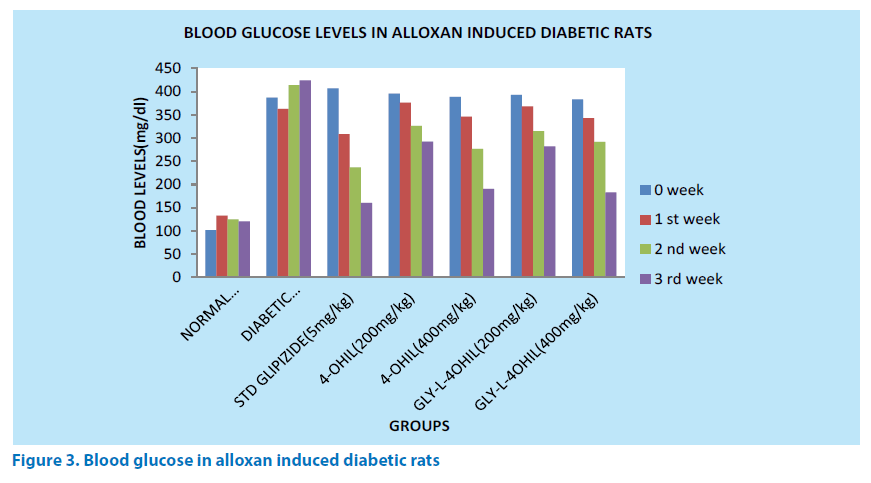 Diabetes was induced experimentally in rats by a single intraperitoneal injection of a freshly prepared solution of streptozotocin (STZ), at a dose of 80 mg/kg body weight in 0.1 m cold citrate buffer of pH 4.5. After 1, 7, 21 days blood was collected with aseptic precautions from the tail vein of the rats under ether anesthesia and blood glucose levels were determined using Glucometer [37]. Animals were considered to be diabetic if the blood glucose levels were above 250 mg/dl, and those animals only were used for the experimental analysis [38]. Diabetes was developed and stabilized in STZ-treated rats over a period of 7 days; control rats were given citrate buffer 4.5 [39,40]. The animals were followed up to 21 days to check the time required for 4-OHIL and GLY-L-4-OHIL to produce peak hypoglycemic activity (Figure 4). 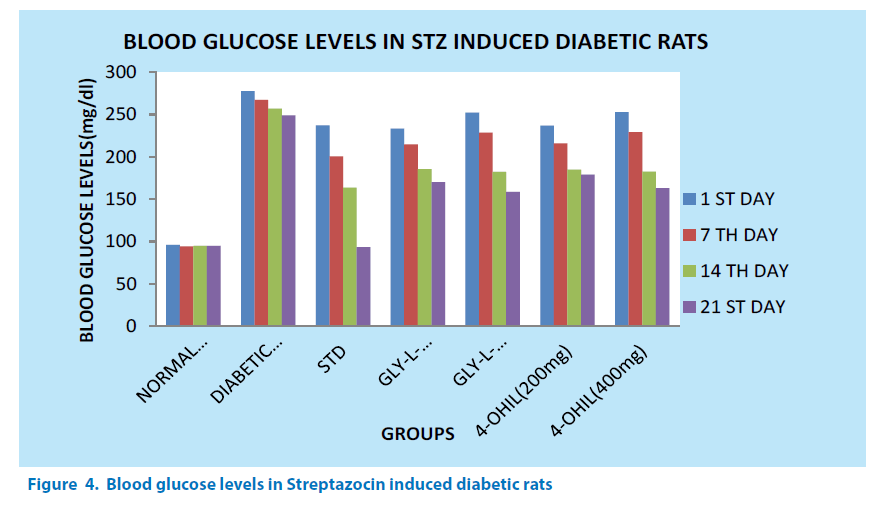 Physical and chromatographic data of Isoleucine derivatives are mentioned in Table 2 and their spectral data is mentioned below [43-47].

The purified compounds were undergone with physical and spectral analysis and their structural configuration is conformed with Infra-red spectroscopy, Nuclear Magnetic Resonance spectroscopy and Mass spectroscopy.

The evaluation of Isoleucine derivatives were done with in vitro and in vivo anti diabetic activity [51], they are

i. Non-enzymatic glycosylation of haemoglobin assay

Statistical analysis reveals that all the experimental results were expressed as MEAN ± S.D where n=6 the results were subjected to one way ANOVA followed by Dunnetts test for multiple comparisons. The statistical significance of different values with P<0.05 was considered significant.

Out of all the derivatives prepared GLY-L-4- OHIL showed prominent anti diabetic activity when compared with standard and control.

Six dipeptides were synthesized from 4-OH Isoleucine with glycine, Threonine, Serine and Valine using Cbz chloride as protecting agent, DCC and DMF are used in peptide forming step and Hbr in acetic acid is used in deprotection step. Finally formed dipeptides were confirmed by spectral data (IR, MASS and HNMR). The formed dipeptides were evaluated for Anti-diabetic activity in different animal models. In vitro studies revealed that compared to all other dipeptides GLY-L-4- OHIL showed improved activity, then it was evaluated for in vivo studies which showed remarkable anti diabetic activity when compared with standard drug and the parent compound 4-OH Isoleucine.