Critical ischemia due to cocaine abuse

As cocaine use is relatively common in the western society and continues to increase, the number of cocaine-related cardiovascular complications and deaths has risen. This case report shows a 30-year-old male with progressive pain and ulcers of the fingertips, and abnormalities during angiography based on peripheral ischemia caused by chronic cocaine use.

A 30-year-old male with progressive pain of the fingertips of both hands and ulcers on the third left hand and second right hand finger was referred to our hospital. He was known with a nicotine and cannabis addiction. Previously, diagnosed with Morbus Buerger, he stopped smoking and was treated with vasodilators and Lymph press, which led to the disappearance of the ulcers and initially reduced his pain. However, his painful ulcers recurred, after restarting smoking and despite treatment with nifedipin, xanthinol nicotinate and ketanserin.

The initial symptoms of pain in the fingers originated two years earlier, especially during heavy physical labor, such as lifting engines, using an automatic sanding machine and application of coating. Pain came in cold and grip during which all fingers participated and paroxysmal discolored.

Angiography of the left arm performed elsewhere showed an occlusion of the radial and ulnar artery with an incomplete palmar arch. Furthermore, digitus 1-4 showed multiple skip lesions, like with peripheral emboli, with a normal appearance of the vessel lumen in between (FIGURE 1). Figure 1: Hand: skip lesions of dig 1-4 with a normal appearance of the vessel lumen in between.

Although the patient was diagnosed elsewhere with thromboangiits obliterans (Buerger’s disease), we were unconvinced because of the absence of ‘corkscrew’ vessels and the normal vascular aspect in between the skip lesions.

Arterial ultrasound duplex of hands and arms showed stenosis and occlusions in all investigated arteries of the hands with collateral blood supply to the hands. There were no signs of aneurysms. On further investigation we noticed that both feet also showed clinical signs of peripheral ischemia. Toe pressures showed a non-critical reduction on the left hallux and no useful Manuscript Click here to download Manuscript Critical ischemia due to cocaine use.docx signal in the right hallux. Ankle-brachial pressure indices were 1.0 on the left and 0.95 on the right.

Except a minimal signal in digit two, there was no clear signal in the other toes of the right side. The left toes all showed reduced pulsatile signals. Angiography of the left leg showed an occluded posterior tibial artery, a partially occluded anterior tibial artery and an open peroneal artery. Filling of the plantar artery, dorsalis pedis artery or arch was not observed (FIGURE 2). 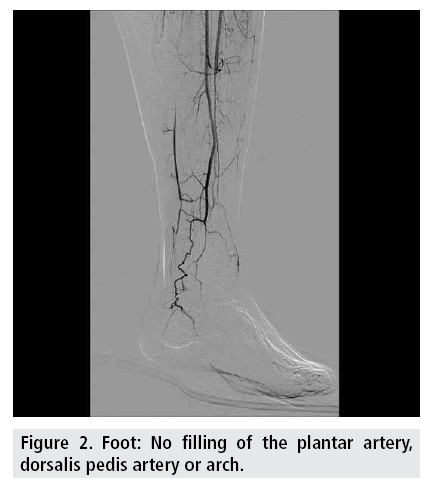 Figure 2: Foot: No filling of the plantar artery, dorsalis pedis artery or arch.

The conclusion was that both hands and feet were ischemic due to multiple arterial occlusions. After excluding other causes of peripheral arterial disease, such as a cardiac source of systemic embolism and the antiphospholipid syndrome, we had a new consultation with the patient. It than came to light that the patient was very regularly using cocaine for the last 10 years, next to his nicotine and cannabis addiction. The frequency of cocaine and cannabis use had decreased, but did not stop, which resulted in less but persisting complaints.

Atherosclerosis was unlikely to be the cause for the ischemia considering his age and the absence of typical atherosclerotic vascular stigmata on angiography. The patient had no history or clinical signs of autoimmune diseases like scleroderma or systemic lupus erythematosus. Furthermore angiography excluded an aneurysm of the posterior humeral circumflex artery and in view of the fact that both the hands were involved, hypothenar hammer syndrome could be excluded as well.

Cocaine use is relatively common in the western society and continues to increase. As a result, the number of cocaine-related visits to emergency departments, hospitalizations, cardiovascular complications and deaths has risen dramatically [1]. Thromboangiitis obliterans, or Buerger’s disease, is a vasculopathy of unknown origin affecting medium- and small-sized arteries and veins [2]. It is thought to be an allergic reaction to nicotine. Both Buerger’s and cocaine induced necrotizing vasculitis show remarkable similarities [2]. As to pathologic manifestations, both conditions involve small- and medium-sized arteries, perhaps with more inflammatory reaction with Buerger’s disease, especially in the acute phase. However, inflammation has also occurred following cocaine use [2]. Although literature reviews show that the presenting clinical findings of Buerger’s disease and cocaine exposure would seem to have unique patterns, some authors propose that cocaine exposure may masquerade as Buerger’s disease and further, that unrecognized cocaine exposure may underlie such cases, even including those originally described by Buerger in 1908 [2]. The angiographic pattern of Buerger`s disease, however, does not show embolic stigmata, as in this case. The pathophysiology of peripheral ischemia, due to cocaine abuse, is acute arterial spasm with subsequent local thrombosis and embolic events. The angiographic picture shows the arterial occlusions and embolic events and the collateral formation afterwards. As also the vasavasorum can be recruited for collateral formation, typical corkscrews vessels can also be seen. The diagnosis of peripheral ischemia due to cocaine abuse is mostly based on exclusion of other more common pathologies.

Arteriography findings lend support to the diagnosis, but are not considered essential when the clinical features are typical. Clinical criteria [3,4] define the classic presentation of Buerger disease and laboratory tests serve to exclude other causes of occlusive peripheral vascular disease in young adults.