The recent publication of the Euratom Directive 2013/59, adopting the reduction of eye lens dose limits from 150 mSv/y to 20 mSv/y, calls for the development of new tools and methodologies for evaluating the eye lens dose absorbed by the medical staff involved in interventional radiology practices. Moreover, the effectiveness of the protective devices, like leaded glasses, which can be employed for radiation protection purposes, must be tested under typical exposure scenarios. In this work, eye lens dose measurements were carried out on an anthropomorphic phantom simulating a physician bound to perform standard interventional neuroradiology angiographic procedures. The correlation between eye lens doses, in terms of Hp (0.07), and the equivalent dose (again in terms of Hp(0.07)) monthly measured with thermoluminescent dosemeters placed above the lead apron at the chest level was studied, in presence and in absence of different types of leaded glasses. The number of workers in a University Hospital for which adequate lens protection approach and dose evaluation method must be adopted was quantified.

Recent epidemiological reviews suggested that radiation-induced cataracts could occur at doses lower than previously recognized [1-6]. Taking these evidences into account, the International Commission on Radiological Protection (ICRP) reduced the annual dose limit for eye lens from 150 to 20 mSv [7]. With the adoption of the new Basic Safety Standards (BSS) Directive (2013/59/Euratom), the European Commission accordingly revised the dose limit for the eye lens [8].

In anticipation of a specific lens dosimetry system to be locally implemented in the clinical procedures, we propose a practical method to estimate the lens dose starting from the Hp(0.07) equivalent dose that is routinely measured by personal dosimeters. The depth dose Hp(0.07) is the dose equivalent at a body depth of 0.07 mm and was introduced by ICRP (International Commission on Radiological Protection) as a good indicator of skin dose and later also of lens dose. Furthermore, different types of leaded glasses were tested, in order to evaluate their effective attenuation in realistic operational conditions.

Moreover, we analysed workers exposition records for year 2013 to quantify how many are the workers of our hospital who need an in depth lens dose consideration.

Dosimeter badges based on three GR200A (LiF: Mg, Cu, P) thermoluminescent dosimeters (TLD) with three different filtrations (plastic, aluminium and copper) were used to evaluate the equivalent doses (both Hp(10) and Hp(0.07)). One badge was placed on the phantom chest, above the heart zone, two other badges were placed on RANDO® eyes.

In this study only Hp(0.07) was used, because this is exactly the quantity to be evaluated also in the lenses position.

Four types of protective leaded glasses were tested to evaluate their attenuation factors. Their main characteristics are reported in TABLE 1. 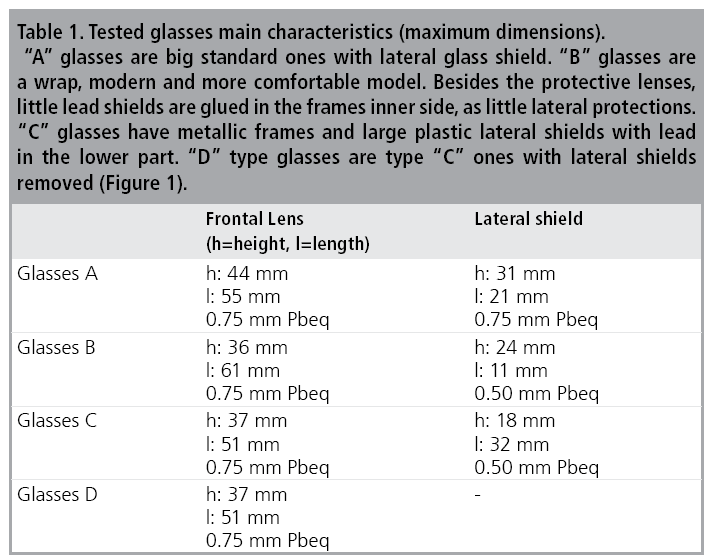 Twenty dose reports for each type of procedure (forty for cerebral arteriography) were extracted from the hospital PACS (Picture Archiving and Communication System) using a dedicated software of EmmeEsse srl. For each of the three neuro-angiographic procedures, the complete set of extracted information was summarised to the most commonly used irradiation conditions delivering the largest part of the total DAP (47- 81% for the procedures that were examined). The parameters characterising the three standard procedures are summarized in TABLE 2. The added filtration was always 0.1 mm Cu plus 1.00 mm Al. During the simulations automatic exposition control was always used, as in clinical routine.

Three repeated irradiations for each experiment were performed. In each case, RANDO® phantom stayed on the left side of the patient, at the level of the chest. Lateral c-arm detector was on RANDO® left side and central c-arm X-ray tube was under the patient’s bed, near physician’s feet.

The ceiling shield was never used, in order to measure doses well beyond the detection limit of the measuring systems. In the first run, no protective glasses were used. From the two measurements of lens dose (right and left lens dose) a mean value was calculated. Then the value of chest dose/lens dose ratio in absence of protections was accordingly obtained. Four other tests were carried out with the four different types of leaded glasses. As before, the ratio between dose at chest and dose at eyes was measured for all the glasses tested. The attenuation of glasses was evaluated as the ratio between chest/lens dose ratio with and without leaded glasses.

To evaluate a single value of chest/eyes dose ratio that can be used for calculating dose at operator eyes from chest one, monthly measured, it was decided to take into account the yearly frequency of each type of exam. Using equation (1), a weighted average value for chest/ eyes dose ratio and attenuation factor for leaded glasses was obtained.

- NumExamsi is the number of exams of i-type performed in one year.

For lens equivalent dose we analysed 8 hospital departments, those with the highest workers exposition, for which we evaluated an overstatement of lens dose of year 2013 for 333 workers, of which 16 work in Neuroradiology. Chest Hp(0.07) monthly measured with personal dosimeter is used as overestimation of lens dose. The annual lens dose for each worker was compared with two thresholds: 10mSv (attention level) and 20 mSv (limit). This in order to have an indication of how many and which workers need a thorough treatment from the point of view of the new lens annual limit of 20 mSv posed by European Directive 2013/59. As a second step, the average correction factor to pass from chest dose to eye lens dose was applied (FIGURE 1). Weighted average values of the attenuation factor for each glasses are reported in TABLE 3. 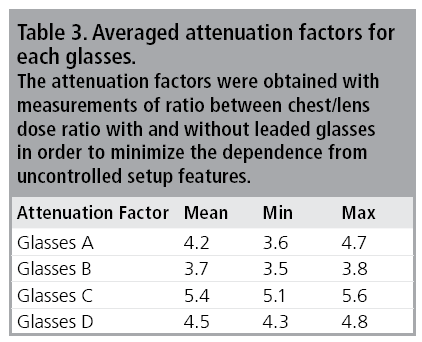 The weighted average values of chest dose/ eyes dose ratio, with and without glasses, are reported in TABLE 4.

Because of the limited number of irradiations performed for each standard procedure, the range (i.e., difference between the lowest and the highest values of each data set) was taken into account as index of the spread upon the data.

They are all physicians and training physicians working in interventional Radiology, Neuroradiology, Cardiology and Hemodynamics.

These considerations lead to suppose that the shape of the whole glasses is important at least as dimensions and thickness. The lens dose is not only decreased by the use of glasses. Many other parameters may influence it. The use of anti scatter drapes and ceiling shields strongly reduces scatter radiation and lens dose. Their use is recommended.

In conclusion, we evaluated an average conversion factor of 1.4 with no protection, and 6.3 in case of use of protective glasses, between dose at operator chest, monthly measured for interventional staff, and eye lens dose, much more difficult to evaluate. The average effective attenuation factor of common leaded glasses was equal to 4.5. The choice of the type of glasses to use is not easy. It has not to be done only comparing physical characteristics, but should be made with experimental measurements in conditions of setup as close as possible to the actual one.

These results will be useful to obtain a first, and necessarily approximate, estimate of the eye lens doses to the medical staff involved in interventional radiology practices, in anticipation of the development of a direct and dedicated eye lenses dose monitoring system. A first recognition of doses absorbed by the interventional workers in our hospital highlighted that about 10 of them are near (below or above) to the new lens dose limit and then need better protection and lens dose evaluation.