Objective: The aim is to demonstrate the clinical outcomes in non-valvular atrial fibrillation with low CHA 2 DS 2 -VASc score after coronary stent implantation with and without hyperhomocysteinemia.

Homocysteine (Hcy) is a sulfhydryl containing non-protein coding amino acid formed mainly as a byproduct in the methionine metabolism and is a metabolic intermediate of the methionine-cysteine pathway, which is linked with a number of vascular diseases including hypertension, coronary artery disease, stroke, etc. The reference of tHcy in plasma is in range 5–10 μM in human. Under normal conditions, plasma Hcy concentrations do not exceed 15 μM [1]. Elevation of plasma Hcy is manifested as hyperhomocysteinemia (hHcy) and has long been suggested as a risk factor for atherosclerosis and is an independent risk factor for arterial and deep venous thrombosis [2]. Positive correlation between hHcy and cardiovascular diseases led to the postulation that homocysteine is an independent risk factor for cardiovascular diseases [3].

Atrial fibrillation (AF) frequently occurs with coronary artery diseases and adds complexity to the selection of an appropriate antithrombotic strategy. The optimal antithrombotic treatment strategy is unresolved in patients with multiple indications. Nonvalvular AF is independently associated with a four- to five-fold increased risk of ischemic stroke [4]. Current evidence supports the use of both aspirin and adenosine diphosphate receptor antagonists in patients to reduce the risk of stent thrombosis or recurrent myocardial infarction (MI) [5].

In patients with non valvular AF, the CHA 2 DS 2 -VASc score is recommended for assessment of stroke risk [6]. Patients with CHA 2 DS 2 -VASc score ≥2 were defined as the high risk and would be recommended to oral anticoagulation therapy. Patient with score of 0 and 1 were defined as the low risk, no antithrombotic therapy or treatment with an oral anticoagulant or aspirin may be considered, while there were a proportion of these patients to suffer from ischemic stroke. Coronary artery disease is present in ≥20% of the AF population. Whether uncomplicated coronary artery disease predisposes to AF and how AF interacts with coronary perfusion are uncertain [7]. Meta-analysis of several studies on folate metabolism and CVD has shown an association with hHcy and cardiovascular events, including vessel damage, atherosclerotic and thrombosis [8]. Previous studies also have reported the role of Hcy in AF patients [9].

This is a retrospective study that all of the outcome data were collected post hoc. This study was conducted including all AF patients receiving dual antiplatelet therapy after coronary stent implantation at discharge in 7 centres in Beijing between January 2011 and December 2013 with hospital discharge diagnoses of International Classification of Diseases, Tenth Revision, Clinical Modification (ICD-10-CM) codes 410–411.Patients received coronary stent implantation this admission regardless of the treatment before. To minimize the effects of stent property differences between drug eluting stents (DES) and bare metal stents (BMS) on long-term clinical outcomes, only patients with DES implantations were included into analysis.

AF is defined as a cardiac arrhythmia with the following characteristics:

(2) There are no distinct P waves on the surface ECG. Some apparently regular atrial electrical activity may be seen in some ECG leads, most often in lead V1.

(3) The atrial cycle length (when visible), i.e. the interval between two atrial activations, is usually variable and, 200 ms (.300 bpm).

The primary endpoint which was occurrence of major adverse cardiac events (MACE), including ischemic stroke, cardiac death, nonfatal myocardial infarction, stroke, coronary artery revascularization. Participants were followed within 1 year following at discharge from any cause. For ischemic stroke which should be with concomitant brain imaging including magnetic resonance imaging or computed tomography, the ICD-9-CM codes 433.x1, 434.x1 and 436 were used to identify.

Between 2011 and 2013, 1756 non-valvular AF incident with coronary stent implantation with CHA2DS2-VASc score = 0 or1 were identified, who received dual antiplatelet therapy and 25 died in hospital, leaving 1731 incident patients (mean age 62.5 ± 9.5 years, 75% male) for our study were followed up for 1 year and 43 with missing relevant data from a follow-up, and 1688 for analysis finally.

The baseline characteristics of the study population are showed in Table 1. 10 (1.1%) had congestive heart failure defined as New York Heart Association (NYHA) class II or higher, and 120 (14%) had dyslipidaemia. Notably, none of the patients had previous history of Stroke/TIA. 348 (20.6%) patients had hypertension, 190 (11.2%) had diabetes mellitus, patients in HHcy group is elder and have higher proportion of current smokers than that in normal group, on the contrary, never-smokers share a lower percentage in HHcy group compared with normal group. The patients were divided into two groups according to baseline plasma total HCY level with a cut off value of 15 µmol/L: normal (1135 patients, HCY<15µmol/L), HHcy (553 patients, ≥15µmol/L).

Table 1: Baseline characteristics of patients with or without HHcy 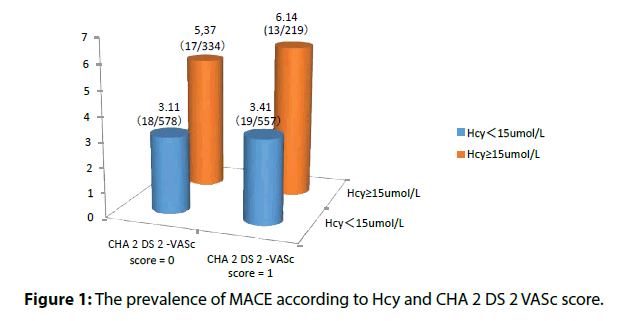 Figure 1:The prevalence of MACE according to Hcy and CHA 2 DS 2 VASc score.

Now, it is widely accepted that an elevated level of Hcy (more than 15 μM) is an independent risk factor for cardio and cerebrovascular diseases. Hcy has been recognized as an independent risk factor for cardiovascular diseases (CVD) [10,11]. It has been estimated that there is a significant positive correlation a 2.5 µM rise in plasma tHcy concentrations is associated with 10% increase in CVD risk [12].

Moreover, it was shown that increased plasma tHcy levels (above 20 μM) should be associated with ninefold increase of myocardial infarction and also with subsequent stroke risk comparing to concentration below 9 μM [13]. Numerous studies have demonstrated a positive correlation between HHcy and increased inflammatory markers in acute coronary syndrome [14].

In this study, we for the first time found that elevated plasma Hcy increased the risk of MACE , demonstrating a significant predictive value for the non-valvular AF patients after coronary stent implantation with CHA 2 DS 2–VASc score of 0 and 1.Although there is debatable for the fact that whether Hcy is a cause or a consequence, a number of prospective cohort studies have found the moderate elevation of Hcy is an independent risk factor for cardiovascular diseases, ischaemic stroke, venous thromboembolic diseases, etc. [15].

As the studies have shown, elevated plasma HCY levels increase the risk of cardiovascular events. However, the pathophysiological mechanisms were not fully clear. As implied from basic research on the mechanism of HCY associated with vascular injury, HCY produced reactive oxygen species and caused lipid peroxidation, platelets and leukocytes activation, and increased prothrombotic factors, which resulted in vascular inflammation which may interact with AF and accelerate thrombus formation [16]. Furthermore, HCY causes endothelial dysfunction with impaired release of nitric oxide and vasodilatation leading to shear stress in vascular wall, which contributes to atheroma progression, and ultimately gives rise to vascular events.

Also, in further human studies, Kosokabe et al. observed a positive correlation between plasma HCY levels and atherosclerotic plaque areas in reference segments of coronary arteries, which were measured by intravascular ultrasound 6 months after the intervention [17]. This evidence supports the atherogenic propensity of HCY and also could explain our study results that worse outcomes in our patients with hyperhomocystinemia in 1 year follow-up.

In this data, the mean age in hHcy group is older than that in normal group. Similar results were found by Friedman et al. these findings suggest that elevated Hcy levels might be one of the explanations for the increased rate of stroke in elderly AF patients [18]. Hcy level increases with age, partly attributed to the increasing deficiency of vitamin B12 observed in the elderly, as result mostly by its poor absorption from food, and also due to declining renal function.

In the present study, we also found that elevated Hcy conferred a higher risk of ischemic stroke in nonvalvular AF patients with low CHA 2 DS 2 - VASc score of 0 and 1. Similar results were found by Marcucci et al. studied 310 AF patients on oral anticoagulant treatment and observed elevated Hcy levels were an independent risk factor for ischaemic events in non-valvular AF [19]. In present study, compared with CHA 2 DS 2 -VASc score of 1, it showed higher OR value and more significant difference in CHA 2 DS 2 -VASc score of 0. The difference might lie in the baseline characteristics of patients and the sample size.

Atrial fibrillation is associated with increased risk of stroke. At present, the CHA 2 DS 2 -VASc score is a widely used and well validated clinical risk prediction tool for ischemic stroke in non-valvular AF. However, it provides only modest discrimination of risk for individual patients with C-statistic that range from 0.549 to 0.638 [20]. The clinical significance of the present study was to identify individuals at high risk of ischemic stroke who had a low stroke risk at baseline according to CHA 2 DS 2 -VASc score. It is indicated that an improved decision should be support in the care of these relatively complicated condition.

Some limitations of our study should be considered. Firstly, it is the retrospective nature of the study. Secondly, whether there is a dose dependent association between HCY levels and risks for MACE should be analyzed.

In conclusion, our findings manifested that nonvalvular AF patients with hyperhomocysteinemia after coronary stent implantation had higher risk of MACE, especially ischemic stroke in spite of low CHA2DS2- VASc score. The next step will be to verify the clinical outcomes over a long follow-up period.

Experiment was designed and data was analyzed by Li Tianchang and Xie Xiufeng written the article.

There is no specific funding.

All the authors report no conflicts.

No additional unpublished data are available.