Cellular functions are dependent on the import and export of molecules. Although some low-molecular-mass compounds by themselves can diffuse through biological membranes, the vast majority of the molecular traffic is assisted by transport proteins. Passive diffusion through pore-forming proteins as well as active transport driven by chemical gradients or ATP is crucial to metabolism as well as the biotransformation of xenobiotics. Pharmacotherapeutic effects are critically reliant on the uptake and the disposition of drugs in target tissues, and resistance mechanisms may involve not only enzymatic biotransformation but also cellular export of the active compound.

Recent attention has been directed to the role of ATP-driven membrane proteins such as P-glycoprotein (Pgp), breast cancer resistance protein (BCRP) and multidrug resistance-associated proteins (MRPs) that counter the intracellular accumulation of drugs by active efflux mechanisms [1-7]. In combination with inhibited uptake by various factors the efflux pumps may safeguard pharmacological sanctuaries that prevent effective treatment of various diseases. Particularly noteworthy is the blood-brain barrier, which makes the central nervous system difficult to access for pharmacological interventions. Available evidence indicates that increased drug resistance can be acquired by enhanced expression of the membrane-bound transport proteins.

Biochemical studies of MRPs and other transporters have been made, and animal models as well as human cells in culture have been investigated in order to elucidate the clinical relevance of the different contributors to drug resistance. However, considering the known differences among mammalian species it is imperative to investigate drug transport in whole human tissues including the brain. Particularly useful in this respect is positron emission tomography (PET), which can be applied for imaging the distribution of drugs in living human subjects [8-13]. A prerequisite is the availability of compounds labeled with a positron-emitting isotope such as 11C or 18F. Owing to the short lifetime of these isotopes it is important to design speedy synthetic routes to labeled molecules for PET applications.

The human genome encodes nine distinct MRPs, and one of them, MRP1, is ubiquitous and appears to play a prominent role in the bloodbrain barrier, being expressed in endothelium, microglia, and astrocytes [2]. Alterations of expression and activity are implicated in diseases, including cancer, epilepsy, Parkinson and Alzheimer disease. An approach for non-invasive imaging based on intracellular glutathione conjugation of a radiolabeled halogenopurine precursor molecule has been proposed to monitor MRP1 function in the brain [9]. The rationale is that a membrane-penetrating “pro-probe”, readily taken up by the brain, will be rapidly conjugated with intracellular glutathione to generate a radiolabeled MRP substrate. Glutathione conjugates are well established substrates for MRP1 and the concept has been implemented in rats and mice [11]. The formation of conjugates is catalyzed by glutathione transferases [6], and a series of N7- or N9-methylated 6-halogenopurines were found to be conjugated by homogenates of mouse, rat and rhesus monkey cerebral cortex [10]. However, considering the notable species differences noted in the conjugation activities, it is necessary to establish the functions of human GSTs in the reactions with 6-halogenopurines for possible applications in human subjects.

The present investigation was undertaken to assay the activities of available human GSTs with 6-chloro- and 6-bromopurine, which could serve as the parent compounds for radiolabeled PET probes.

6-Bromopurine and 6-chloropurine, glutathione, and all other compounds were obtained from Sigma-Aldrich. The purines were dissolved in DMSO and after dilution in the enzyme assay system the DMSO was 5% (v/v). Recombinant human GSTs A1-1, A2-2 allelic variants C and D, A3-3, M1-1, M2-2, M4- 4, M5-5, P1-1 and T1-1 were expressed and purified by published methods [3].

All activity measurements were performed on a SPECTRAmax PLUS384 microplate spectrophotometer (Molecular Devices, Sunnyvale, CA).

The net extinction coefficient at 290 nm for the reactions of 6-bromopurine or of 6-chloropurine with glutathione was determined experimentally as 19,000 M-1.cm-1. The reaction of 0.05 mM of the halogenated purine with 10 mM GSH was followed to completion in the assay buffer in the presence of enzyme.

Specific activities of the GSTs were determined by measurements at 290 nm with 6-bromopurine or 6-chloropurine in 0.1 M sodium phosphate buffer, 1 mM EDTA, pH 7.4 at 37 ºC in a 0.5 cm light path using 2 mM of one of the 6-halogenopurines and 6 mM glutathione.

Kinetic constants were determined by measurements with a constant glutathione concentration of 6 mM, and the 6-halogenopurines were varied between 0.05 and 7.0 mM for 6-bromopurine and 0.05 and 12.5 mM for 6-chloropurine. The kcat/ Km values were estimated by regression analysis of the initial part of the saturation curve.

The conjugation of glutathione with 6-bromopurine and 6-chloropurine was accompanied by a substantial increase in UV absorption, suitable for a spectrophotometric assay of the reaction (Figure 1). The difference in the UV spectra of the 6-halogenopurines and their common product 6-glutathionylpurine was maximal at 290 nm (Figure 2). In order to determine the net extinction coefficient for the reaction, spectra were recorded for the 6-halogenopurines in the reaction buffer at pH 7.4 and compared with the spectrum of the 6-glutathionyl-purine obtained following stoichiometric conversion into the conjugate. A large molar excess of glutathione and the presence of GST P1-1 as a catalyst secured the completion of the reaction. The net extinction coefficient for the reaction was determined as 19,000 M-1.cm-1. 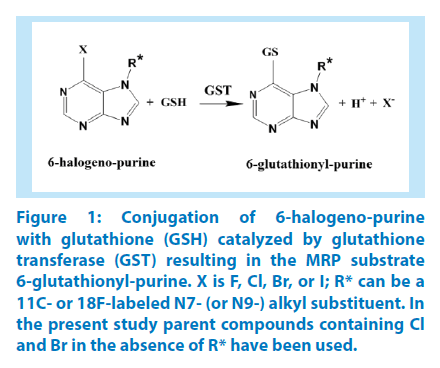 Figure 1: Conjugation of 6-halogeno-purine with glutathione (GSH) catalyzed by glutathione transferase (GST) resulting in the MRP substrate 6-glutathionyl-purine. X is F, Cl, Br, or I; R* can be a 11C- or 18F-labeled N7- (or N9-) alkyl substituent. In the present study parent compounds containing Cl and Br in the absence of R* have been used. 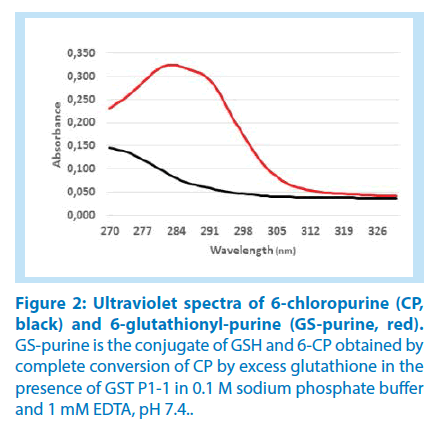 Figure 2: Ultraviolet spectra of 6-chloropurine (CP, black) and 6-glutathionyl-purine (GS-purine, red). GS-purine is the conjugate of GSH and 6-CP obtained by complete conversion of CP by excess glutathione in the presence of GST P1-1 in 0.1 M sodium phosphate buffer and 1 mM EDTA, pH 7.4..

In mammalian tissues GSTs of the alpha, mu, pi, and theta classes are generally those considered to be responsible for the conjugation of glutathione with xenobiotics [6]. Nine human GSTs representing these classes were available for our investigation: GSTs A1-1, A2-2 (two allelic variants, C and D), and A3-3 from the alpha class; GSTs M1-1, M2-2, M4- 4, and M5-5 from the mu class; GST P1-1 the only human member of the pi class; and GST T1-1 from the theta class. For comparison two rat enzymes from the alpha class: rGST A2-2 and rGST A3-3 were used, since the in vivo conjugation of 6-halogenopurines has previously been studied in rats [9].

Table 1 shows that the specific activities of the different GSTs with 6-bromopurine and 6-chloro-purine varied by three orders of magnitude. In general, 6-bromopurine gave 1.5- 5 times higher values than did 6-chloropurine, as could be expected from their different chemical reactivities. One exception was GST A2-2*C that gave a 42 times higher value with 6-bromopurine than with 6-chloropurine. GST P1-1 was clearly the most active enzyme with both substrates by an order of magnitude or more. The least effective enzymes were GST M4-4 and GST T1-1. Five allelic variants of GST A2-2 have been described and they all differ in substrate preferences [8-14]. Of the two variants GST A2-2*C and GST A2-2*D tested with 6-halogenopurines, GST A2-2*D was the more active, but the allele has not been identified in human populations and only been noted in EST sequences. Among the rat enzymes rGST A2-2 was clearly superior to rGST A3-3, but rGST A2-2 was still 7-8 times less active than the human GST P1-1 (Table 1).

The specific activities were determined with 6 mM glutathione in the assay system. This concentration is in the high end of the physiological range of intracellular glutathione concentrations in most tissues (0.5-10 mM), and is essentially saturating the GSTs, which have Km values < 1 mM. In these measurements the 6-halogenopurines were used in 2 mM concentration, which does not saturate the GSTs with respect to the second substrate, such that the true Vmax or kcat values could be determined.

However, xenobiotic GST substrates are not expected to reach millimolar cellular concentrations and the physiological levels correspond to the low end of the steady-state kinetic rate-saturation curve. Under these conditions the rate equation is approximated by v=(kcat/Km)·[S], where kcat/Km expresses the catalytic efficiency of the enzyme. Table 2 shows the catalytic efficiencies of GST P1-1, GST M2-2, and rGST A2-2. GST P1-1, which is expressed in essentially all human tissues (except the adult liver) and the most abundant GST in the brain, is the most efficient enzyme with both 6-halogenopurines. GST M2-2 is a major GST in skeletal and heart muscle, and also an abundant enzyme in the brain [1,5]. GST M2-2 is less efficient with both 6-bromopurine and 6-chloropurine, approximately 80- and 160- fold, respectively, than GST P1-1 (Table 2).

Table 2: Catalytic efficiencies (kcat/Km) of the most active GSTs with 6-halogenopurines.

GST P1-1 is the predominant GST in the brain [12] and considering its 4-fold higher concentration than that of GST M2-2, GST P1-1 is the major determinant of the conjugation reaction in this tissue. The most active of the rat enzymes, rGST A2-2, is approximately 5-10- fold less efficient than human GST P1-1, but considerably more efficient than GST M2-2 (Table 2). The rat enzyme is present in the cerebral system of the rat and may contribute to the biotransformation of 6-halogenopurines. There are obviously additional GSTs in the rat brain, but elucidation of their relative importance is beyond the scope of the present investigation.

In chemotherapy there is currently interest in identifying those patients who would benefit from treatment with drugs inhibiting ABC transporters. Particular attention has been directed to MRP1, the gene product of ABCC1, which is ubiquitous in the tissues of the body and involved in the cellular export of various drugs and other compounds. Among the numerous MRP1 ligands are drugs conjugated with glutathione, and MRP1 is overexpressed in many tumors, indicating a role in multidrug resistance. Animal studies have demonstrated the potential of measuring ABC transporters in living brains via in situ generation of reporter ligands from precursors that penetrate the bloodbrain barrier. 6-Halogenopurines are suitable precursors of this kind, which intracellularly form glutathione conjugates that, in distinction from the parent compounds, cannot penetrate membranes by themselves. Assuming that the administered purine derivative is rapidly taken up by the cells and that the glutathione conjugation is not rate-limiting, the efflux of the glutathionyl-purine conjugate will be a measure of the ABC transporter activity (Figure 3). A recent study evaluated a series of purine derivatives N-substituted with different 18F labels for cellular transport studies by means of dynamic imaging through positron emission tomography (PET) and single-photon emission computed tomography [4]. Figure 3: Uptake of the pro-probe 6-halogenopurine derivative via the blood-brain barrier followed by its intracellular GST-catalyzed conjugation with glutathione to form a conjugate that cannot freely traverse the cell membrane. The conjugate is a substrate for the multidrug associated resistance protein MRP1, which transports the product through the membrane. With a suitable label (R*), such as a positron emitting 11C or 18F, the efflux can be monitored by PET as a measure of MRP activity.

Simple 6-halogenopurine derivatives containing 11C- or 18F-labeled alkyl N7-substituents can penetrate the blood-brain barrier and be conjugated with glutathione [4,9]. The available evidence shows that the substituted 6-halogenopurines are GST substrates just as the parent compounds [7]. The results of the present investigation thus demonstrates that the concept of pro-tracer activation by GSTs in the human brain should work like in the prior animal studies.

We thank Professor Bengt Langstrom, Uppsala University, for suggesting the investigation. Support for the study was obtained from The Swedish Research Council, The Swedish Cancer Society, and the Childhood Cancer Research Foundation.