A 45 year-old male with initial presentation with central nervous system involvement and sensory ganglionopathy, with ultimate diagnosis of primary Sjögren’s syndrome (PSS). Progressive disease was noted despite initial treatment with high-dose steroids and intravenous immunoglobulins (IVIg). He subsequently had an excellent response to combination therapy of intravenous cyclophosphamide (CYC) and rituximab (RTX).

Severe neurological involvement in patients with primary Sjögren’s syndrome (PSS) is not uncommon. Peripheral neuropathy has been reported in 1.8% to 10% of patients with PSS undergoing electrodiagnostic testing. Sensory ganglionopathy (pure painful sensory or sensory ataxic neuronopathy) is recognized as a characteristic neurological complication of PSS, caused by damage to the sensory neurons of the dorsal root and gasserian ganglia. Other clinical forms of peripheral neuropathy have been reported with PSS, such as axonal polyneuropathy (sensory, motor or sensorimotor), motor neuropathy, small fibre neuropathy, mononeuropathy multiplexmultiplex mono-neuropathy, autonomic neuropathy, demyelinating polyradiculoneuropathy and trigeminal and other cranial neuropathies. We report a case of PSS with initial presentation with neurologic symptoms attributed to central nervous system and sensory ganglionopathy, initially refractory to high dose steroids and IVIg, subsequently treated successfully with combination of intravenous CYC and RTX. To our knowledge, this is the first case report documenting effective treatment of severe neurologic manifestations of PSS with the combination of RTXRituximab and CYCCyclophosphamide. 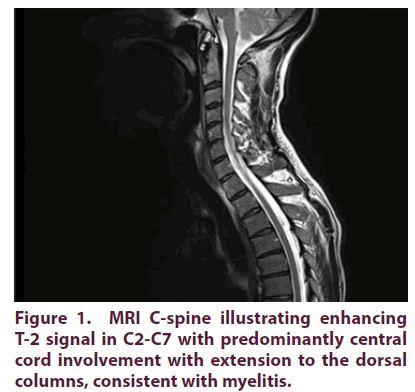 Because of the progressive central nervous system involvement and ganglionopathy despite treatment with IVIg and high-dose steroids, the patient was treated with 1 g methylprednisolone pulse × 3 days, then intravenous CYC (CYCLOPS protocol) over 6 months combined with 1 g RTX (× 2 infusions) along with tapering oral GC course. After clinical neurological improvement, he was switched to maintenance therapy of mycophenolate mofetil (MMF) 1 g BID. Mild persistent neuropathic pain was treated with gabapentin and amitriptyline. Figure 2 illustrates the progress of neurologic manifestations with treatment. 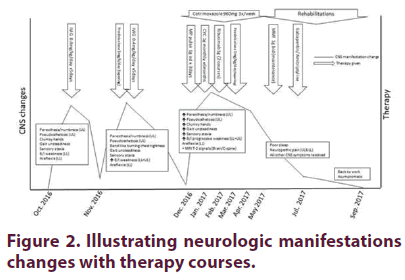 Differential diagnosis of the acquired sensory ganglionopathy are:

Patient was followed up at interval of 3 months post hospitalization. After period of rehabilitation, the patient had successfully returned to his full-time work with minimal neurological impairment. He remains stable 1 year after initiation of CYC and RTX therapy.

Sensory ganglionopathy is produced by posterior spinal root involvement. In PSS, lymphocytic infiltrates of dorsal root and spinal ganglia without vasculitis and degeneration of dorsal root ganglion neuronal cell bodies has been described. Some authors also proposed a role of autoantibodies. To date, there is no consensus about the specific treatment of neurological involvement in PSS. Generally, GC therapy is initiated in patients with either central or peripheral neurologic manifestations. Other immunosuppressive agents that have been studied showed variable results with favourable outcome in CYC and RTX therapy [3-5]. Pereira et al. reported on a series of 13 PSS patients with PSS associated sensory ganglionopathies treated with GC (n=7), MMF (n=7), hydroxychloroquine (n=6), IVIg (n=5), CYC (n=4), and the other patients received other immunosuppressive drugs (n=2). It was concluded that the treatment strategies with GC in association with immunosuppressive drugs, namely MMF, had positive results. In contrast, IVIg had disappointing results [6]. Furthermore, Mekinian et al. have reported efficacy of RTX in PSS with peripheral nervous system involvement (n=17) which included sensory ganglionopathy. Conversely, when the pathogenesis of neurological manifestations is not related to vasculitis, the efficacy of RTX could not be demonstrated. Additional studies are necessary to validate these findings [7,8].

Combined treatment with RTX along with CYC/doxorubicin/vincristine/prednisone (R-CHOP) has been recommended for PSS-associated B cell aggressive non-Hodgkin's lymphomas, under the guidance of an experienced haematologist. The combination of CYC and RTX can be an effective therapy for managing severe refractory central nervous system involvement and sensory ganglionopathy in PSS.