Sjögren Syndrome (SS) is an autoimmune rheumatic disease, whose hallmark is ocular and mouth dryness secondary to autoimmune exocrinopathy. Rarely, SS can affect both peripheral nervous system (PNS) as well as central nervous system (CNS). When CNS is involved, SS is usually diagnosed after patients present with neurologic symptoms. Both ischemic and hemorrhagic stroke can present as first manifestation of primary SS. Stroke is described in literature as a rare entity associated with primary SS, and only few cases were reported. In some cases, CNS involvement was thought to be related to CNS vasculitis, but most of the times remains questionable. We present a rare case of intracranial hemorrhage as first manifestation of primary SS and a review of the pertinent literature.

Sjögren Syndrome (SS) is an autoimmune rheumatic disease, whose hallmark is ocular and mouth dryness secondary to autoimmune exocrinopathy [1]. These symptoms are due to excessive lymphocyte infiltration. SS typically affects women after 40 years of age, but it has also been reported in young adults and adolescents. Serologic markers are positive Ro/ SSA, La/SSB and antinuclear (ANA) antibodies. SS can also affect extra glandular systems such as neurologic system. While Peripheral Nervous System (PNS) involvement is often described, CNS manifestations are controversial and extremely rare [2]. The incidence of stroke in patients with primary SS is about 2% [3]. Based on a PubMed search, only 15 cases of stroke were described in primary SS since 1982. Out of these cases, five patients presented with subarachnoid hemorrhage and two patients with intracranial hemorrhage (ICH). Here we report a case of ICH as first manifestation of primary SS.

A 61-year-old Caucasian female with a past medical history significant for Hashimoto thyroiditis, cervical cancer, osteoarthritis and migraines presented in the emergency room for worsening headaches. Patient was treated for one year with sumatriptan and topiramate for migraines. Within the previous year, she had both Computed Tomography (CT) head and magnetic resonance imaging MRI brain that were reportedly normal. Despite treatment, headaches worsened and interfered with her work as an accountant. On the day of admission, she also complained of dizziness, nausea and vomiting, photophobia. On examination, patient was confused, lethargic and requiring repeated stimulation to answer questions. Neurologic exam revealed 5/5 strength in all extremities, no pronator drift, no change in sensation, patellar deep tendon reflexes (DTR) 2+ bilaterally and negative bilateral Babinski. Electroencephalogram (EEG) was negative for acute seizures. CT head without contrast revealed subarachnoid hemorrhage (SAH) (Figures 1 and 2). Brain MRI was obtained and was consistent with SAH in left posterior fossa, bifrontal intracranial hemorrhage (ICH) and no evidence of midline shift (Figures 3-5). Neurosurgery was consulted, and cerebral angiogram was performed which revealed normal four vessel cerebral angiogram. MR Venogram of brain was negative for thrombosis. Neurosurgery performed right craniotomy and evacuation of the right frontal hematoma with cortical and dural biopsies. Following that, a detailed review of systems revealed long history of eye dryness (she had laser surgery and was applying lubricant drops in her eyes for many years), mouth dryness (using very frequent mint drops) and occasionally parotid gland swelling, along with multiple tooth decays, cavities, and halitosis. Over the past two to three months, the patient also noticed an unintentional 20-pound weight loss, decreased appetite, night sweats, jaw and axilla pain and short term memory loss. 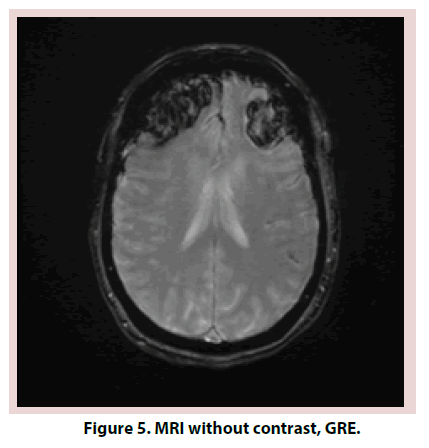 Due to concern of CNS vasculitis process, an autoimmune work up was performed and revealed positive ANA (titer 1: 160, speckled pattern) and SSA. All other autoantibodies were negative (Table 1). Complement levels were normal. Both Erythrocyte Sedimentation Rate (ESR) and C-Reactive Protein (CRP) were elevated. Salivary gland biopsy confirmed lymphocytic infiltration consistent with a diagnosis of primary SS (Figure 6). Given the sudden onset of intracranial hemorrhage and newly diagnosed primary SS, the suspicion of associated CNS vasculitis persisted. Further work up with brain and leptomeningeal biopsy was negative for vasculitis, amyloid deposition or neoplasia. During this time, patient was started on high dose IV methylprednisolone for three days, followed prednisone 60 mg daily. Within the first week, the patient mentation improved significantly. She was discharged to acute rehabilitation on prednisone taper, levetiracetam and all previous home medications. Repeat cerebral angiogram was performed in one month after discharge from the hospital and was also normal with no evidence for primary CNS vasculitis.

Neurologic and psychiatric involvement in primary SS varies between 0%-70% according to reports and depends on their clinics, but generally affects 20% of the patients [1]. PNS involvement can manifest as axonal polyneuropathies, sensory ganglioneuronopathy, motor neuropathy, small-fiber neuropathy, multiple mononeuritis, trigeminal and other cranial neuropathies, autonomic neuropathies, or demyelinating polyradiculoneuropathy [1].

CNS involvement occurs mostly in women, with a mean age of 40-50-years-old. It usually manifests after 10-11 years of disease. The focal manifestation is the most common CNS manifestation [1]. The initial work-up that should be done when neurologic primary SS is suspected consists of autoimmune serologies. Anti-Ro antibodies are associated with severity of disease as well as abnormal findings suggestive of small vessel angiitis seen on cerebral angiography [4].

EEG has limited value and is more useful in detecting subclinical abnormalities that precede the development of clinical primary SS with CNS manifestations [5].

MRI is also useful for detecting focal CNS involvement, more than diffuse CNS disease [5,8,9]. Cerebral angiography is helpful to exclude other causes of CNS disease however only about 45% of patients with primary SS and CNS disease have findings suggestive of small vessel vasculitis.

Stroke is an extremely rare manifestation of primary SS It can be ischemic or hemorrhagic. Since 1982, fifteen cases have been reported including ours [3,10-21]. Out of these, six patients presented with SAH, three patients with cerebral infarction, four patients with venous sinus thrombosis, two patients with ICH and one of them with thalamic hemorrhage [3]. In all these reported cases, patients were females (Tables 2-5).

One of the causes of ischemic stroke is internal carotid atherosclerosis. There have been several studies showing a strong connection between systemic rheumatic disease and early atherosclerosis [22]. A non-randomized study done by Ciccone et al. evaluated the differences in carotid intima-media thickness (C-IMT) in patients affected by autoimmune diseases [23]. A comparison between systemic Scleroderma (SSc) patients versus other connective tissue disease patients (such as systemic lupus erythematosus, polymyositis/dermatomyositis, antiphospholipid syndrome, mixed connective tissue disease, Sjogren’s syndrome) versus control patients showed no differences of incidence in terms of atheromatous plaques in both SSc and other connective tissue diseases with higher number of plaques than control group. These investigators demonstrated the abnormal function of the endothelial layer in SSc group predisposes to macrovascular changes such as increased C-IMT (which can lead to ischemic events) and microvascular changes (which can lead to Raynaud’s phenomenon). Thus, patients with systemic rheumatic disease are at risk for ischemic events by the increased number of atheromatous plaques compared to general population but not by increased thickness of the carotid intima-media.

Our patient was a middle age female with new onset of cognitive issues and headaches that developed ICH with secondary SAH. Although the cerebral angiogram and brain and leptomeningeal biopsies were negative for CNS vasculitis, this could not be excluded since this patient had no risk factors that could cause the ICH (such as diabetes, hypertension, cerebral aneurism or vessel spasm, exposure to NSAIDs), Bifrontal lobe involvement was also unusual. Previous reports regarding small CNS vessel vasculitis reported a sensitivity of only 75% for leptomeningeal biopsy [24].

Currently there is no standard of care for SS with CNS involvement; previous reports described the use of immunosuppressive therapy involving high dose pulse steroids, Rituximab or Cyclophosphamide [24]. Our patient did receive methylprednisolone 1 g for 3 consecutive days, followed by oral prednisone 1 mg/ kg that was tapered down over the course of 4 months. The patient’s mentation improved in one week and the confusion resolved. She remains without any neurological deficits.

Our case emphasizes the importance of a taking a detailed history in ICH cases, which may detect an autoimmune etiology. Although extremely rare, ICH can be seen in patients with primary SS and CNS involvement. Increasing awareness about the neurologic manifestations of SS may lead to prompt treatment and better prognosis of these patients.