Background: Patent Foramen Ovale (PFO) can serve as a conduit for paradoxical embolus or as a nidus itself for thrombus formation in Cryptogenic Stroke (CS). Debate for PFO closure is ongoing but favors closure in well-selected patients. Four randomized-control trials demonstrated a reduction in stroke recurrence with PFO closure. Patients were selected with high-risk PFO features in DEFENSE-PFO and CLOSE trials.

Cases: This case series describes four patients with CS immediately following or during exercise- induced-Valsalva: Push-ups, bench pressing, and lifting heavy boxes. PFOs with severe shunting during Valsalva were demonstrated with bubble echocardiograms in all cases.

Stroke is a leading cause of morbidity and mortality in adults in the U.S. Approximately 25%-30% of ischemic strokes are classified as “cryptogenic” when no definitive etiology or identifiable source is found. Cryptogenic Stroke (CS) is a diagnosis of exclusion; a complete work-up must include evaluation for large vessel artery disease, small vessel artery disease, cardiac abnormalities, and dysrhythmias. Particularly in younger patients, evaluation of other causes such as thrombophilias or rheumatological disorders may be appropriate.

One proposed mechanism of CS is via a Patent Foramen Ovale (PFO), a cardiac defect arising from a persistent component of fetal circulation serving as a conduit for paradoxical embolization of small venous thrombi, or thrombus formation within the conduit itself. While 25% of the general adult population has a PFO [1,2], that prevalence increases up to 60% in patients with CS [3,4].

Attributing causation of CS to a PFO can be a challenge. The Risk of Paradoxical Embolism (RoPE) score is an objective estimate of the probability that a PFO in a CS patient is incidental or pathogenic [5]. Younger patients with fewer cardiovascular risk factors have a higher score. With a maximum score of 10, the index estimates a 90% chance that the stroke is attributable to the PFO. Nearly 80% of CS patients with a RoPE score greater than 6 had the presence of a PFO [5]. However, the score has limitations and should not be used in isolation. Lower scores have been associated with higher stroke recurrence, likely influenced by traditional cardiovascular risk factors [6,7]. Additionally, the score does not take into account high-risk anatomic features such as large shunt size, Atrial Septal Aneurysm (ASA), or hypermobility of the septum that may be better markers for pathogenicity [8,9].

There are several possible mechanisms certain PFOs may be pathogenic. Authors have proposed that PFOs with anatomical features such as a long-tunneled PFO, ASA, or chiari’s network may in fact themselves be thrombogenic [17,18]. These features may act as a nidus for in-situ clot formation due to slow or turbulent blood flow [17,18].

Classically it has been thought that PFOs may act as conduit for a pre-formed clot-in-transit: paradoxical embolization. This involves a dynamic right-to-left (R-L) cardiac shunt whenever the pressure in the right atrium exceeds that of the left atrium. This transient flow gradient occurs physiologically at rest during early diastole; it is inducible by the Valsalva maneuver or any straining- activity such as heavy lifting, moving bowels, sexual intercourse, coughing, sneezing, or vomiting, which elicit a disproportionate increase in intrathoracic pressure. In one case series of 148 patients with PFO, a R-L shunt was observable in 57% of patients at rest compared to 92% of patients while straining [3]. Several authors have demonstrated cryptogenic stroke is associated with preceding valsalva-like straining [19-21]. Regardless of whether a thrombus is in-transit via the PFO or formed in-situ, it is conceivable that a valsalva maneuver could play the terminal step in its forward propagation.

In this case series, we present four patients who presented to our facility with acute ischemic stroke that was preceded by a Vasalva- like-straining; intense push-ups or heavy weight-bearing exercise. All were found to have a PFO with a large R-L shunt, notably exacerbated by Valsalva maneuver with microbubbles in the left atrium that were too numerous to count within three cardiac cycles on bubble echocardiogram. For reference, the CLOSE trial considered a shunt to be large when there were greater than 30 microbubbles present in the left atrium. Valsalva-like straining may have led to the hemodynamic conditions for embolization to occur.

A previously healthy 20-year-old male presented after sudden onset expressive aphasia, fragmented speech, inability to write at school. The night prior he had been intensely weightlifting, “maxing out” his shoulder press, whereby he lifted more weight in one set than he ever had before. His National Institutes of Health Stroke Scale (NIHSS) was two on arrival at our center. He was out of the therapeutic window for thrombolytics so he was loaded with Dual Antiplatelet Therapy (DAPT) with aspirin and clopidogrel. Brain MRI demonstrated acute infarcts involving left frontal cortex and corona radiata. Transesophogeal Echocardiogram bubble study (bTEE) confirmed a PFO with a moderate R-L shunt at rest, and a large shunt with Valsalva. Additionally, he was found to have an ANA titer of 1:320, mixed homogeneous and speckled pattern.

His expressive aphasia significantly improved over his 3-day hospitalization. He was discharged home on rivaroxaban 20 milligrams daily [4]. Months later, he had percutaneous endovascular closure of the PFO and was without further strokes at one year (Figure 1). 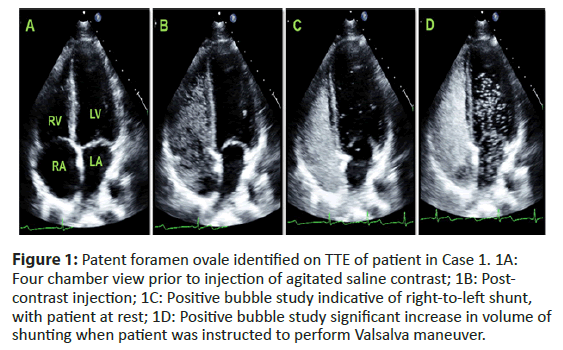 A previously healthy 34-year-old US Army service-woman on hormonal contraceptives presented with sudden onset left-sided weakness and hemianopsia while doing push-ups. She was given intravenous tissue plasminogen activator (IV tPA) with an NIHSS of five.

A previously healthy 49-year-old male presented with word-finding difficulty following a transient episode of right-sided weakness and right facial droop immediately after doing push-ups and bench-pressing 300 pounds in rapid succession. NIHSS was 1 on arrival. He did not receive IV tPA, as his symptoms had markedly improved; he was loaded with Asa 325 mg and clopidogrel 300 mg.

Brain MRI revealed scattered multifocal infarcts within left frontal and parietal lobes and chronic infarcts in the right cerebellum. bTEE demonstrated a PFO with a moderate R-L shunt at rest, and a large shunt with Valsalva. He was discharged home on apixaban 5 mg twice daily and atorvastatin 80 mg. He received an implantable loop monitoring (ILR) device to evaluate for occult atrial fibrillation, which was negative after four months and he subsequently underwent PFO closure. He continued anticoagulation for three months post-closure and was subsequently changed to Aspirin 81 mg. No atrial fibrillation was detected at one year (Figure 2). 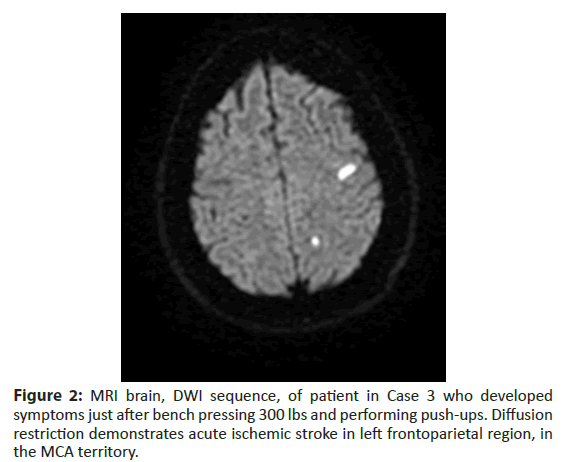 A 60-year-old male smoker with a history of hypertension and asthma presented with sudden onset double vision, slurred speech and right-sided weakness immediately following intense lifting of heavy boxes for several hours. On arrival, he was severely dysarthric with left gaze preference and dense right hemiplegia with an NIHSS of 17. He received IV tPA.

Brain MRI demonstrated acute left thalamic infarct and evidence of chronic cerebral infarcts bilaterally in the hemispheres. bTEE revealed an atrial septal aneurysm and PFO with a large R-L shunt at rest, severely exacerbated with Valsalva. His dysarthria, diplopia and hemiparesis resolved over the 6-day hospitalization to NIHSS was zero. He was discharged home on apixaban 5 mg twice daily, aspirin 81 mg daily, and atorvastatin 80 mg daily.

We have presented four patients with cryptogenic strokes preceded by Valsalva-like-straining such as intense pushing or heavy lifting just prior to, or during symptom onset; each patient had a PFO with a large R-L shunt, exacerbated during Valsalva maneuver. The authors propose that such exercises may have increased intrathoracic pressure, worsening the R-L shunt, thus creating the terminal conditions for embolism to occur. Notably, three of the four patients are under the age of 50 and had a RoPE score of at least eight, suggesting an 84% chance that the stroke is related to the PFO.

There are some confounding limitations. In the second case, the woman was on hormonal contraceptives and was positive for anticardiolipin IgM antibodies with persistent elevation at three months. While this could have produced a pro-coagulable state that increased her risk of paradoxical embolism, it could have also increased her risk of primary thrombotic stroke. Interestingly, Liu et al. recently demonstrated that PFO closure was superior to medical therapy alone in patients with underlying thrombophilia’s [22], furthering the idea that a PFO may just be the terminal step of a complex pathogenesis (Table 1).

In Case 4, the 60-year-old male had multiple cardiovascular risk factors and his RoPE score was 3, which comports with a low probability that his CS was attributable to the PFO. The presence of severe resting inter-atrial shunt and an atrial septal aneurysm make PFO the more likely etiology. Additionally, there was a clear temporal relationship between the Valsalva-inducing-exercise with symptom onset. This patient further illuminates the shortcomings in the RoPE score.

Several prospective randomized trials demonstrated benefit with percutaneous PFO closure, particularly in younger patients without cardiovascular risk factors, and with the aforementioned high-risk PFO features [9,13-15]. In the CLOSE trial, which selected only patients with large inter-atrial shunts or atrial septal aneurysm: none of patients in the PFO closure group had stroke recurrence over the five year follow up period, versus 5.9% in the antiplatelet only group (P<0.001) [13]. Likewise in DEFENSE-PFO, which only selected patients with atrial septal aneurysm, large PFO or hypermobility of the septum: none had stroke recurrence in the intervention group vs. 10.5% in the medical arm in a 2 year follow up period (P=0.023) [9]. These studies demonstrated the most robust treatment response when compared to their predecessors, perhaps in part because of stricter inclusion criteria (Table 2).

Patient selection for PFO closure will be important for future management of these patients. One proposed screening tool is the RoPE score but it has not yet been validated for this purpose. In at least one meta-analysis it has failed to correlate with eligibility criteria outlined in CLOSE, REDUCE or RESPECT trials [23]. One major limitation of the score is that it does not take into account various features associated with PFO, such as shunt size, presence of an atrial septal aneurysm, or endothelial function. While some of these features including large shunt or atrial septal aneurysm have been associated with increased risk of stroke, the role of PFO promoting endothelial dysfunction has been controversial. One study suggested a PFO facilitates impairment of endothelial function acutely by the transfer of microbubbles into the arterial circulation [24] and other suggested improved endothelial function in PFO patients compared to patients without PFO [25]. Scicchitano et al. showed no change in endothelial function after PFO closure compared to ASD closure showing improved function [26]. Nevertheless most relevant to this series, the ROPE score also does not take into account clinical provoking factors such as Valsalva-straining prior to the patient’s stroke.

PFO closure is likely beneficial in younger patients with cryptogenic stroke who have a PFO with high-risk features. These four patients had high-risk PFO features and cryptogenic stroke that was preceded by exercise induced Valsalva just prior or during symptom onset. Future screening tools selecting CS patients for PFO closure, may warrant the addition of high-risk PFO characteristics in order to comport with the most current clinical trial data. It may also be worth considering a clinical question as well: “Did Valsalva-provocation occur prior to symptom onset?”

Written informed consent was obtained from the individual subjects of any potentially identifiable images or data included in this article.