Effectiveness of adalimumab versus infliximab in patients with ankylosing spondylitis: A randomized double blinded clinical trial

Objective: To compare the efficacy of Adalimumab versus Infliximab in patients with active Ankylosing Spondylitis.

Method: 80 patients with active AS who were candidates for receiving anti TNF drugs were randomly assigned to Adalimumab receiving group (group A) or Infliximab receiving group (group B). At beginning, BASDAI score, ESR level, CRP level, presence or absence of peripheral arthritis and enthesitis, need for NSAID use, schober test and occiput to wall distance were recorded. A second rheumatologist who was unaware of the type of drug used, evaluated patients 2 months and 4 months after initiating treatment and new data was recorded. Data were analyzed using SPSS software version 26 with T-test, Mann-Whitney U test, Chi-squared test, McNemar and Wilcoxon test.

Results: after 2 and 4 months treatment, patients of both groups showed significant improvement in the BASDAI score, ESR level, CRP level and Schober test. They all needed less NSAID to control their pain. Both drugs had similar effects on clinical and laboratory variables.

Conclusion: Adalimumab and Infliximab are both effective for improving clinical and physical status and quality of life in patients with active AS. Since there is no significant difference for the effectiveness of these 2 drugs, accessibility, price and administration of these drugs can help physicians decide between these drugs.

Ankylosing Spondylitis (AS) is a chronic inflammatory disease that affects the sacroiliac joints, spine, peripheral joints, and enthuses [1]. The common clinical symptoms of AS are pain, joint stiffness, and the eventual loss of spinal mobility which result in a higher rate of work disability and unemployment in patients with AS [2]. AS affects males more than females and it is more often diagnosed in the ages of 20 to 40 years [2-4]. Although there is no exact etiology known for AS it is shown to have an obvious relation with the HLA-B27 allele [5]. For many years treatment options for patients with AS have been including Non-Steroidal Anti-Inflammatory Drugs (NSAIDs), Disease-Modifying Anti-Rheumatic Drugs (DMARDs), and physical therapy [6]. Recently inhibitors of Tumor Necrosis Factor α (TNFα) are the most viable alternatives to existing treatment options [7]. TNFα is an inflammatory cytokine that is found in abundance in joints of patients with many inflammatory diseases such as AS [8,9]. Adalimumab, Infliximab, Etanercept, Golimumab, and Cetrolizumab are the 5 TNFα inhibitors prescribed for treatment of spondyloarthropathies including AS [10,11]. Adalimumab and Infliximab are two of the TNFα inhibitors which have been proved as an effective treatment in reducing signs and symptoms of AS [12,13]. These two drugs have different chemical structures, half-lives, and different administrations [14].

This study was conducted in Alzahra hospital in Isfahan (a central city of Iran). Alzahra hospital has a referral clinic for patients suffering from rheumatologic disease locating in Isfahan. Patients presenting to Alzahra Hospital Clinic with a diagnosis of AS according to Assessment of SpondyloArthritis International Society (ASAS) criteria were evaluated. The AS patients who had not responded to at least 3 months of treatment with 2 different NSAIDs became candidates for initiating biological drug, Infliximab or Adalimumab, and became eligible for the study.Patients were excluded from the study if they had any contraindications for receiving anti-TNF drugs.

The study was approved by the Research Council and Ethics Committee of Isfahan University of Medical Sciences (IR.MUI.MED.REC.1398.736). All acquired information about the study was given to the participants and an informed consent form was obtained from them.

In this study, 80 AS patients who were candidates for receiving anti-TNF drugs were randomly assigned to Adalimumab receiving group (group A) or Infliximab receiving group (group B) based on their appointment number. Patients in Group A were referred to trained nurses to learn how to inject Adalimumab at home and have been treated with 40mg/Kg Adalimumab once every 2 weeks subcutaneously. Adalimumab was used under the brand name of Cinora, made by the pharmaceutical company Orchid pharmed. Patients in Group B were treated with 5mg/Kg Infliximab on weeks 0, 2, 6, and every 6 weeks thereafter. Infliximab was used under the brand name of Remicade, made by the pharmaceutical company JANSSEN. After premedication with hydrocortisone and chlorpheniramine, Infliximab was infused over 2 to 3 hours. Before initiating anti-TNF treatment, 2 and 4 months after beginning the treatment, patients of both groups were evaluated by a second rheumatologist who was unaware of the type of anti- TNF regimen. The second rheumatologist examined the patients and filled the designed questionnaire.

This questionnaire was composed of 6 questions to calculate the BASDAI score and other data such as ESR level, CRP level, presence or absence of peripheral arthritis and enthesitis, need for NSAID use, Schober test, and occiput to wall distance. Collected data were analyzed by a blinded analyst who was unaware of the type of medication received by each group of patients.

Data were analyzed using SPSS software version 26. Quantitative data were expressed as mean (confidence interval 95%) and qualitative as number (percentage). T-test and Mann-Whitney U test was used for comparing variables’ score among two treatment groups (A and B). The chi-squared test, McNemar, and Wilcoxon test were used for comparing variables’ score during the time. P<0.05 was considered as statistically significant level. The sample size was calculated as 40 in each group based on Soubrier et al. study (2018) [17] in which samples α=0.05 and 53.5, 44.6 are means and 17.8, 22.4 are standard deviations.

In this study, 80 enrolled patients were randomly assigned to two groups. Table 1 shows, at baseline 90 percent of participants (n=72) were men. In the Adalimumab receiving group, 35 out of 40and in the Infliximab receiving group 37 out of 40 were men (P=0.46), there was no significant relation between gender and type of treatment at baseline. 25% of the patients smoked cigarettes in both Infliximab and Adalimumab groups that means Smoking history was completely similar in the two treatment groups.The mean Patient’s age was reported 34.3 years with a confidence interval of 32.4,36.2 and there was no significant difference for this variable in two treatment groups (P=0.45). Although, the mean disease duration in the Infliximab group was a bit higher than that in the Adalimumab group (6.8 years versus 5.8 years), the difference between the mean disease duration in the two groups was not statistically significant (P=0.2). Also, for other demographics and clinical characteristics summarized in Table 1 (BASDAI score, ESR, OWD, CRP, NSAID, Enthesitis, Arthritis, Schober test), there were no significant differences in the two groups. Only 4 patients out of 80 had enthesitis in the first visit (5%). 3 of them received Adalimumab and the other one received Infliximab. For arthritis, it was the same as shown in Table 1. Also, 10 patients (12.5%) had a Schober test >3 cm at baseline.

Table 2 demonstrates, mean changes in clinical characteristics over time (from baseline to 2 and 4 months after). After 2 months from initiating treatment, the BASDAI score in the Adalimumab group shows significant improvement from 7.1 to 4.2. A significant difference between the time of treatment was observed as early as month 2 (P<0.001) and was maintained over the 4-month observation (P<0.001). For patients at baseline, ESR level was 30.0 while 2 months after treatment with Adalimumab reached 23.5 and 4 months later reached 20.1. Patients’ ESR levels were significantly different at baseline compared to month 2 and month 4 (P<0.001). According to Table 2, Measures of OWD and CRP improved over time at month2 and 4 compared to baseline. After 2 months of treatment with Adalimumab, 15 patients (37.5%) were NSAID dependent compared to 37 patients (92.5%) at baseline (P< 0.001). similar results conducted when comparing baseline and month 4 (P<0.001) for the Schober test. Response to treatment was observed in both Schober tests at months 2 and 4 (23 and 34 patients respectively) While For patients at baseline; it was only observed for 5 patients (12.5%). For Enthesitis and Arthritis components, Adalimumab was not significantly effective over time (P=0.25 and P=0.5).

Table 2. Clinical and laboratory findings during treatment with Adalimumab.

In Table 3, mean changes in clinical characteristics after treatment with Infliximab is shown. As shown, the effect of Infliximab over time is similar to that of Adalimumab (Table2 and Table3). Patients treated with Infliximab in this trial demonstrated statistically significant improvement in measures of BASDAI score, ESR, OWD, CRP, NSAID, and Schober test (P<=.008). However, for Enthesitis and Arthritis components, no significant differences are seen over a period of time (P=1).

Table 3. Clinical and laboratory findings during treatment with Infliximab.

Table 4. Comparing the effectiveness of Adalimumab and Infliximab based on mean changes at month 2 and month 4. 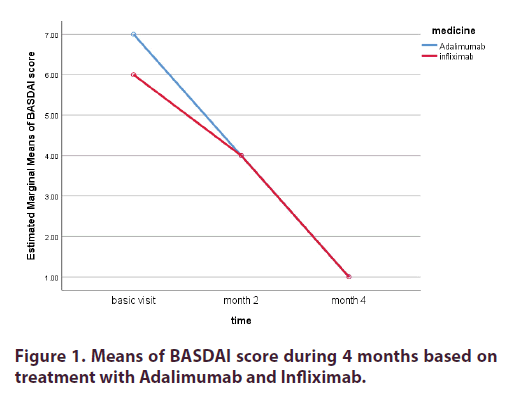 Figure 1. Means of BASDAI score during 4 months based on treatment with Adalimumab and Infliximab.

The results of this randomized double-blinded clinical trial indicate that treatment with Adalimumab and Infliximab in patients with active AS show significant improvement in variables such as BASADAI score, ESR, OWD, CRP, NSAID use, and Schober test after 2 and 4 months of treatment (all with P-value ≤0.008).

These results are similar to many studies such as the trial done by De´sire´e van der Heijde and colleges [12] in which Adalimumab is reported to be an effective treatment for patients with active AS, to significantly improve all measures of disease activity such as BASDAI score or CRP, for up to 24 weeks.

The randomized trial of JOHN C. DAVIS, JR, colleges [18] is another study to report Adalimumab as an effective treatment in patients who have an inadequate response or tolerance to NSAID treatment in reducing the signs and symptoms of active AS.

In the study done by Haibel and colleges [19], Infliximab shows high efficacy to significantly improve factors such as BASDAI score, CRP, and patients' general pain.

Lumbar flexion (Schober test) is a sensitive indicator of spinal mobility [21] in this study both Adalimumab and Infliximab are shown to be significantly effective in spinal mobility improvement. Participants with a Schober test > 3cm at the first visit and 2 and 4 month after starting treatment have been 5 (12.5%), 23 (57.5%) and 34 (85 %) in Adalimumab receiving group and 5 (12.5%), 13 (32.5%) and 33 (82.5%) in Infliximab receiving group.Similar results have been reported in the trial of De´sire´e van der Heijde and colleges [12] in which the magnitude of improvement after treatment with Adalimumab (34.2% after 12 weeks of treatment) shows improvement after a short period of treatment. Also in the Braun et al, study spinal mobility (assessed as BASMI score) shows statistically significant improvement at week 156 of treatment with Infliximab [22].

However, in the current study treatment with Adalimumab nor Infliximab does not show a significant effect for enthesitis pain and arthritis. The number of participants with enthesitis and arthritis in each group has been very limited, 3 (7.5%) patients in the Adalimumab receiving group and 1 (2.5%) patient in the Infliximab receiving group, which can explain the results of the statistical analysis.

When comparing the efficacy of the two drugs during treatment, no significant difference is seen for none of the variables recorded, except for the Schober test at month 2 (P=0.025). Either in terms of BASDAI score, ESR, CRO, OWD, need to take NSAIDs or Schober test. In the study of Yehua Wang and colleges [25], on the comparison of the efficacy and acceptability of TNFα inhibitors for AS patients, all drugs were confirmed to be effective for the treatment of AS, Adalimumab, Infliximab and Etanercept have been slightly prioritized among commonly known TNFα inhibitors but there is no evidence of superiority amongst any of these drugs.

In the Meta-analysis of Zaren MA and colleges [26], no significant difference in the incidence of side effects for TNFα inhibitors (Adalimumab, Infliximab, Etanercept, Certolizumab, and Golimumab) is seen.

Since there is no significant difference seen between the efficacy of Adalimumab and Infliximab as effective treatments for AS patients, other factors such as the cost (price) and different administrations of the two drugs can be a useful guide for deciding between prescribing the drug.