Background: To elucidate the role of muscle mass loss (MML) in the long-term outcome of cirrhosis after the endoscopic eradication of esophageal varices (EV).

Methods and findings: This is a subgroup analysis of 82 prospectively enrolled cirrhosis patients with eradicated EV. A severe portal hypertension (PH) was defined by post-treatment hepatic venous pressure gradient ≥12 mmHg. MML was assessed by skeletal muscle index at the L3 lesion (cm2/m2) with the cut-off values of 38 for women and 42 for men (median observation period, 37.4 months). Twenty-four patients (29.3%) had MML. Multivariate analysis showed that a presence of hepatocellular carcinoma (P<0.0001) and a presence of MML (P=0.002) were significant prognostic factors. In the cohort with severe PH, the survival rate was significantly lower in patients with MML than in those without. However, in the cohort without severe PH, the survival rate showed no difference between patients with MML (100% at 1year, 50% at 3 years and 5 years) and those without (92.3% at 1 year and 3 years, 71.8% at 5 years; P=0.278).

Conclusions: MML is an independent prognostic factor after the eradication of EV in cirrhosis, and the mild PH exerts a constraining effect against the negative influence of MML.

Esophageal varices (EV) are a major complication of cirrhosis [1] that are detected in approximately 50% of cirrhosis patients, and newly-formed or worsening varices can be demonstrated in 5% to 15% of them each year, with a third of the patients with EV undergoing a bleeding episode [2-4]. International consensus clearly shows the timing of primary/secondary prophylaxis with the established therapies using medications and/or endoscopy [3,5]. These data meet the needs of medical care after the eradication of EV and can effectively predict the prognosis.

Muscle mass loss (MML) is an impaired muscular status caused by abnormal health conditions and aging [6,7]. It has become widely recognized in the hepatology field because of the significant influence of MML on patients with liver disease. MML is a poor prognostic factor in cirrhosis or hepatocellular carcinoma (HCC) patients [8,9], and a predictor of the development of complications [10,11] and outcomes after surgical treatment [12].

Based on this background, it is possible to develop a hypothesis that there might be a certain effect by MML on the prognosis of patients with EV. However, there is a paucity of data regarding the relationship between the presence of MML and long-term outcomes of patients with EV treated by endoscopy. Therefore, the present study aimed to elucidate the role of MML with respect to the severity of portal hypertension (PH) in the longterm outcome of cirrhosis patients after the endoscopic eradication of EV.

This is a subgroup analysis of the cohort of the prospective study that includes consecutive cirrhosis patients (March 2008 to December 2014). The study was performed to examine the long-term outcomes of cirrhosis patients with EV eradicated by endoscopic treatment. This study was approved by the ethics committee of Chiba University Hospital, and informed written consent was obtained from all patients. The inclusion criteria were as follows: (1) cirrhosis patients with EV who were scheduled for sclerotherapy combined with argon plasma coagulation (APC), which was a principal treatment for primary/ secondary prophylaxis of EV in our department; and (2) those who were scheduled for the evaluation of the severity of PH by hepatic venous catheterization after the endoscopic treatment. A diagnosis of cirrhosis was based on a combination of biochemical and imaging findings, the latter using both ultrasound and computed tomography (CT). The criteria for primary prophylaxis in this study were the presence of medium-to-large varices and/or red signs on varices.

However, the study excluded following patients: (1) a Child-Pugh C classification or advanced liver cancer (stage C or D according to the Barcelona Clinic Liver Cancer staging system for HCC [13]), since the use of a sclerosant is not recommended for these advanced liver disease patients in Japan; (2) those who underwent a transjugular intrahepatic portosystemic shunt (TIPS); and (3) those using vasoactive drugs, such as β-blockers, which are not approved as a treatment for PH in Japan. The degree of ascites was defined from grade 1 to 3 according to international guidelines [14]. Spleen volume was measured by the sum of the manual trace of spleen on the CT image using image analysis software (HOPE/DrABLE-EX; Fujitsu, Tokyo, Japan).

The endpoint was a prognosis determined by either the time of death, the receipt of a liver transplantation, or a final hospital visit. The observation period was defined as the time interval between the end of the endoscopic treatment and the time of the endpoint.

Definition of EV: Gastroesophageal varices were classified according to the general rules of the Japan Research Society for Portal Hypertension [15]: small, medium, and large. Red signs were assessed by the presence of red wale markings, cherry red spots, or hematocystic spots. A recurrence of varices was determined by a recurrence of varices and/or red signs on the endoscopic image.

Gastroesophageal varices were considered to be the source of the bleeding when no other cause of gastrointestinal bleeding could be identified in patients without any evidence of active bleeding or a fibrin clot.

After the confirmation of the intravariceal puncture by the presence of withdrawn blood in the injection needle, we injected the sclerosant, which was prepared as a 5% solution (a mixture of equal volumes of 10% ethanolamine oleate and iopamidol; Oldamin; Mochida Pharmaceutical, Tokyo, Japan; Iopamiron 300; Bayer Schering Pharma, Osaka, Japan). Fluoroscopy was used to administer the sclerosant to fill the variceal vascular bed to the left gastric vein and to avoid an excessive injection. The needle puncture was repeated for multiple variceal vessels, using a maximum dose of 20 mL of 5% sclerosant solution at one session.

The sclerotherapy was performed once or twice a week to achieve variceal embolization, and the effect was evaluated before each section by endoscopic ultrasonography using a 12MHz ultrasonic miniature probe system (UM2R; Olympus, Tokyo, Japan). After the confirmation of the embolization of varices, a consolidation therapy was added by APC with the following settings: an argon gas flow rate of 1.4 to 1.8L/min and an arc output of 40 W; with an ICC200/APC300 or a VIO300D/APC2 unit (ERBE Elektromedizin GmbH, Tübingen, Germany) with a flexible APC probe (ERBE Elektromedizin GmbH, Tübingen, Germany). APC was performed one or two times to obtain the whole mucosal coagulation approximately 5 cm from the esophagocardiac junction. Follow-up endoscopic examinations were performed 6 months after treatment, and every 6 months to 1 year thereafter.

The quantitative assessment of the muscle was made by the CT finding at the L3 region using the SliceOmatic V5.0 software (Tomovision, Montreal, Quebec, Canada) according to the literature [17,18]. Briefly, the sum of the cross-section areas of the skeletal muscle was calculated (cm2), and the formula “cross-sectional muscle area/height2” provided the skeletal muscle index at the L3 lesion with the cut-off values for diagnosing MML: 38 cm2/m2 for women and 42 cm2/m2 for men [19].

The study expressed the data as the mean ± standard deviation (SD), median, or percentages. The Student’s t test or the Mann-Whitney U test was used for the analysis of continuous variables, and the chi-square test was used for categorical variables. The Kaplan-Meier method calculated the cumulative survival rate. The study also detected significant factors by using univariate and multivariate analysis with Cox regression analysis. P values less than 0.05 were considered to be significant. Statistical analyses were performed using SAS version 9.4 software (SAS Institute, Cary, NC).

Table 2: Comparison of clinical findings between patients with and without muscle mass loss

Prognosis with respect to MML and PH 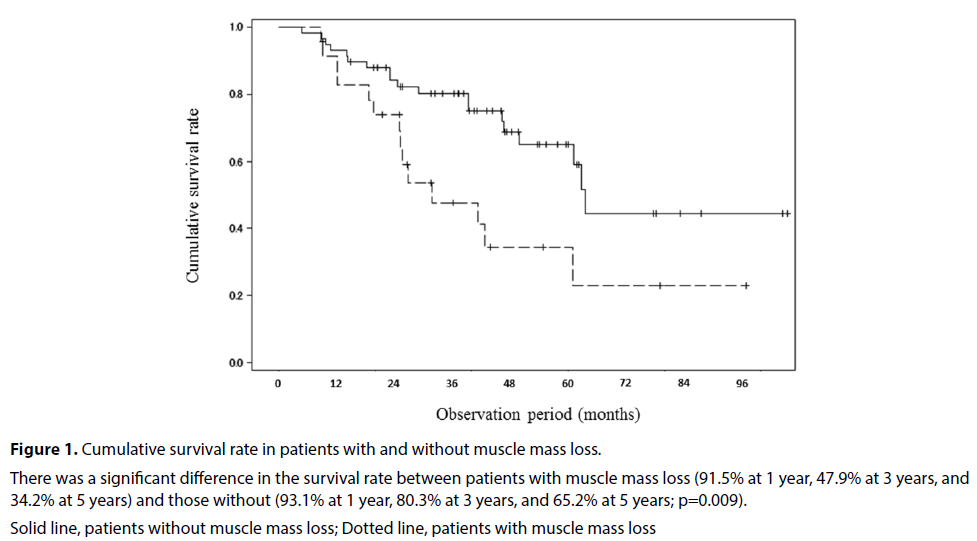 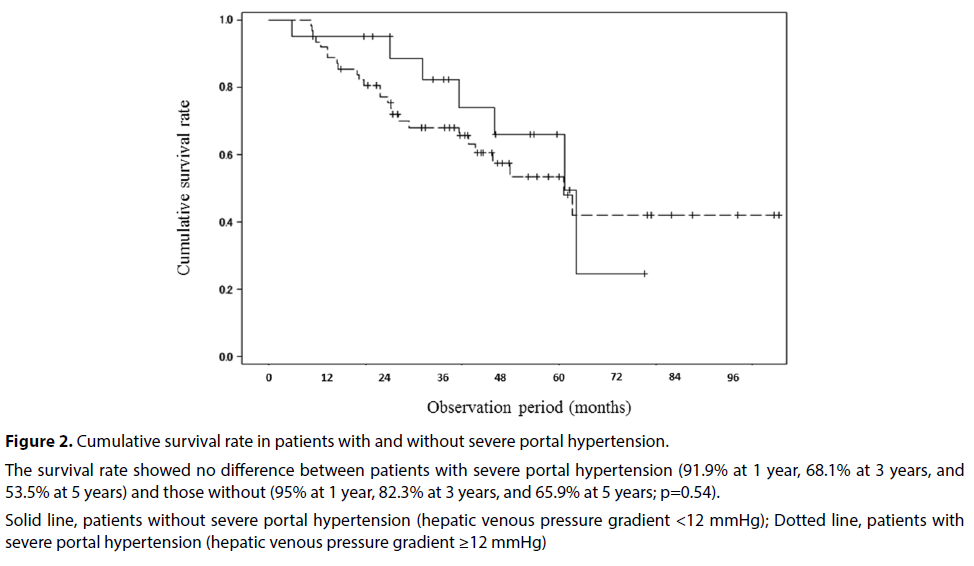 Prediction of the prognosis is an important issue in the management of cirrhosis patients. To the best of our knowledge, this may be the first study to report the significant influence of MML as an independent prognostic factor for cirrhosis after the eradication of EV. Furthermore, although the precise mechanism remains undetermined, there is an interaction between portal hemodynamics and muscle atrophy, which is that the mild PH exerts a constraining effect against the negative influence of MML. It should be determined whether the application of vasoactive medication or TIPS could reduce the portal pressure and in turn reduce the influence of MML.

The present study detected HCC as a significant prognostic factor other than MML, which may be plausible according to the literature [21]. However, the HVPG was not a statistically significant factor for prognosis. One of the reasons may be a potential bias of the patient population; this study was performed in patients with cirrhosis accompanied by EV, mostly of moderate or high grade. In other words, the patient’s condition suggests the presence of a certain degree of PH, evidenced by a mean HVPG of 14.9 mmHg and 75.6% patients with HVPG 12 mmHg or higher. In fact, investigators suggested that the link between the severity of PH and the prognosis of cirrhosis patients is contentious, and the influence of portal pressure may depend on the additional patient condition factors such as liver function and/or compensation/decompensation [22,23].

The prognosis in patients with MML in our study was comparable to or slightly worse than that in patients with sarcopenia in the literature: 85% at 1 year and 63% at 3 years [8], and 63% at 1 year and 51% at 3 years [24], probably due to the different patient characteristics or the different cut-off values for MML. In fact, the present study used novel diagnostic cutoff values to determine MML, which were recently proposed for Japan [19]. The prevalence of MML, which may be termed presarcopenia because we did not use muscle power criterion, was 29.3% in our study cohort. A previous study reported a similar frequency of presarcopenia: 24.4% (103/422) of cirrhosis patients with Child-Pugh class A, 37.7% (89/236) of those with Child-Pugh class B, and 37.1% (23/62) of those with Child-Pugh class C [25]. Meanwhile, the prevalence of sarcopenia in the Western study is higher than ours: 41% of the patients listed for liver transplantation [24], 40% [18] and 66.2% [26] both in pre-orthotopic liver transplantation patients. The frequency of muscle volume depletion may depend on the race, patient population, and diagnostic criteria for muscle volume quantification. However, a possible reason for the lower frequency of MML in our study may be a potential bias in the patient selection for endoscopic treatment, which is not basically applied for patients with Child- Pugh class C. At the same time, the adequacy of the cut-off values for MML need to be validated in the future.

Recurrence of EV may be a problem that needs to be properly managed. Investigators have reported the anatomical and/or hemodynamic factors related to EV as the predictive parameters for recurrence: severe-type peri-esophageal collateral veins and large perforating veins of the esophagus [27], poor development of para-esophageal veins [28], the high velocity and branch type in the left gastric vein [29], and a posttreatment area of submucosal vessels in the cardia [16]. The present study reported that no significant relation between MML and EV recurrence exists, suggesting the importance of a local factor and not a systemic factor to predict post-treatment EV recurrence. A recent research has demonstrated the benefit of oral supplementation with BCAA on the prognosis of sarcopenia patients [8]. Although the frequency of MML was not significantlydifferent between patients with and without oral supplementation of BCAA in our study, the effect of such nutritional support should be prospectively investigated in the future to discover if it may contribute to suppressing the negative effect of MML in cirrhosis after variceal treatment.

There are some limitations to our study. The first is that it is not a prospectively performed study, and the sample size is relatively small. A further study with a large patient population is needed to validate our data. The second is that the substantial influence of MML may be elucidated by a comparison with control patients who have EV without any treatment. However, since the international consensus strongly recommends the application of primary/secondary prophylaxis for moderate/severe EV or bleeders, a prospective comparison may be difficult based on the ethical aspect.

In conclusion, MML is an independent prognostic factor after the eradication of EV in cirrhosis patients, and the mild PH exerts a constraining effect against the negative influence of MML. The data encourage us to maintain or enhance the muscle volume/power before the advancement of PH.

Authors have no conflict of interest.