A fibroadenoma is a non cancerous tumor in the breast that is commonly found in women under the age of 30, they often develop during puberty so are mostly found in young women, but it can also occur in any age [1]. It is usually felt as a lump in the breast which has a rubbery texture, smooth to touch and moves easily under the skin. Most of them occur in a painless manner, but sometimes they may feel tender or even painful. The exact cause of fibroadenoma is unknown. It probably occurs because of increased sensitivity to the hormone oestrogen or due to familial prepondance [2].

• Complex fibroadenomas: Where there is overgrowth of cells (hyperplasia) that can grow rapidly which can be diagnosed through a tissue biopsy [4].

Some fibroadenomas can be felt while some are only found on an imaging test (like a mammogram or ultrasound). A biopsy is needed to know if a tumor is a fibroadenoma or some other problem.

Breast Imaging, Reporting & Data System (BIRADS) is the information about the condition summed up in a number, (BI-RADS) score.

This is a summary of a diagnosed case of a left mammary fibroadenoma (BIRADS - 2) successfully treated with the help of homoeopathy within a span of months [8].

A 35-year-old woman, housewife consulted on 06-10-17 with a lump in the left breast. She was short statured, moderately built, dark complexed. Her complaints had started at 2011 with pain in left breast. The pain aggravated by slightest touch or jar. It was also accompanied with profuse menses and abdominal pain. She was diagnosed with fibroadenoma of the left breast on December 2011, for the complaint she took allopathic treatment for one year. 6 months later, surgery was performed. In 2016, she again developed the same fibroadenoma on left breast and was under the influence of modern medicine for 6 months, and again excision was performed later. In 2017 she again developed fibroadenoma in the same breast. She was then referred by the allopathic physician to approach homoeopathy treatment. She also suffered from emotional disturbances as well [9,10].

Worked as a teacher before and until her delivery.

Born and brought up in a middle-class family and has 2 sisters & 2 brothers. She studied B.sc; B.ed and started working in a school as a teacher. She got married at the age of 23 years. After her delivery, she stopped going to school for teaching [11].

Anxiety and fear during the time of her complaints.

Desires company during the time of her complaints.

The remedy Cal.phos was selected as it was the single medicine covering the symptom left breast fibroadenoma, as given in synthesis repertory, but the prognosis was poor. The case was again reconsideredtaking into account the pathology, painful tumor of the breast at night and the repeated occurrence even after excision, and also being the high grade remedy covering the general mammaetumors in the synthesis repertory, Con. mac in LM potency was selected.

Each LM potency was prepared by dissolving one globular in 100 ml of water, to which 40 drops of alcohol were later added.

During the last visit to the clinic she was doing fine, and was continued with placebo further. On physical examination there was no lump seen.

Remembering the lectures of Dunham, “Pling and Avicenna recommended poultices of Conium and corn plaster to remove tumors of the breasts”. In this case, the patient was suffering from the tumor of the left breast. The tumor was painful and aggravates on touch and also at night. This was the characteristic symptom throughout her complaint.

The above mentioned symptom reminded me of Hering’s materia medica, it was found under the chapter Conium mac., as “Hard and painful lumps in mammae.Tumor under left nipple as large as a hen egg, moving freely under superificial fascia and very hard painful on pressure”. He clearly mentioned that Con.mac is the most effective remedy taking glandular induration into consideration.

Kent further writes regarding the significance of the remedy, “Conium has been extensively used formalignant affectionsof glands, because it takes hold of glands from the beginning and infiltrates and they gradually growto a stony hardness,like scirrhous.

Nodules in the breast even where milk has not yet formed,lumps and nodules induration”.

Dr. S. R Phatak, has also written in his material medica, under the drug Conium maculatum, as…….

Mammaries and ovaries are affected with engorgement and stony induration. Sensation of lump. Hard tumour in mammae with stitches or piercing pains.

In this case, the patient had repeated occurrences of tumor, even after incision (FIGURES 1-6). The materia medica of Clarke describes Con. mac as…..”Scirrhus of the mammae after contusions; 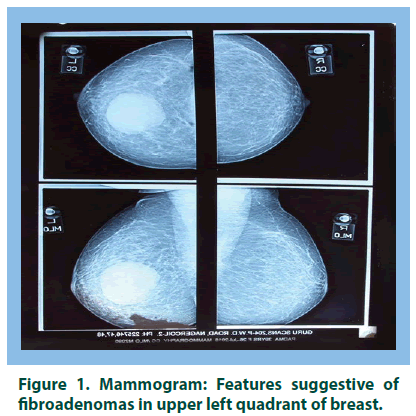 Scirrhus induration of the mammary glands with itching and shooting pains.

Conium maculatum is undoubtedly a glandular remedy indicated for the indurations, this is more vividly described in the Farrington’s material medica as, “The glands affected are of a stony hardness. These indurations are quite common in the mammae.

Indicated after contusions or bruises when induration is the result”.

Referring Con.mac in fibroadenoma of breast in other repertories:

The LM potency, scale was chosen in accordance with the directions of Hahnemann in 6th edition of Organon, “Thus in chronic diseases, every correctly chosen homoeopathic medicine, even those whose action is of long duration, may be repeated daily for months with ever increasing success…”[12,13].

The homoeopathic remedy selected helped in the disappearance of the fibroadenoma, as was evident from the mammogram report recently (FIGURES 7 AND 8). Further the homoeopathic remedy also helped in amelioration of the pain in the left breast along with disappearance of the lump in the breast. The generals of the patient also had been improved which were interfering the quality of life. The recurrence of the complaint had also been corrected. This shows the complete coverage capacity of a single homoeopathic remedy, which is selected according to the principles of homoeopathy. This kind of case study and prescription quality is yet to be followed by the Homoeopaths. In cases of fibroadenoma of breast, most often people decide against surgery because it can distort the shape and texture of the breast. Lumpectomy can make the breast to look smaller. Routine postoperative complications include hematoma, infection, poor cosmesis, and re-excision. Taking all these factors into consideration documented case studies may pave the way for ascertaining the role of homoeopathic drug therapy in such conditions, which is an already established cost-effective system of medicine (TABLES 1 AND 2).

no conflicts of interest

Diagnosis and Management of Chronic Diseases (2021)