Role of PAX1 gene in the occurrence of human neural tube defects: a study in North Indian population

Neural Tube Defects is a collection of conditions related to the opening in the spinal cord or brain region that occurs in 3rd or 4th week of embryonic development. The worldwide incidence ranges from 1 to 10 infants per 1,000 births. The multifactorial etiology involves a variety of environmental and genetic risk factors. The present study assesses the role of maternal PAX gene mutations in the causation of NTD affected pregnancies in North Indian Population. The paired domain region was screened for mutations among 100 case mothers and 100 control mothers using High Resolution Melting curve analysis, followed by sequencing. A known synonymous single nucleotide polymorphism at 609, G to A, was observed among 4 case mothers but none among control mothers. The findings of the present study might suggestthe possibility of the effect of PAX1 G609A polymorphism, a silent mutation on the occurrence of neural tube defects. However, large scale trio studies are required to understand the role of maternal genomic imprinting to bring out conclusive results.

A major proportion of congenital deformities in humans are related to central nervous system. Neural tube defects (NTDs) in prenatal phase are one of the most common malformations [1]. They are a collection of conditions associated with the failure in closing the neural tube which mainly occurs during the first 28 days of conception [2], and are one of the serious birth defects of the brain and spine [3] because the brain and a part of spine arise out of it. Basically, the notochord ectodermal cells proliferate and differentiate which in turn causes the sides of the neural plate to come closer joining each other resulting in blocking the neural groove [4,5]. This results in the death of infants in the very first year of birth or continues life with a number of disabilities [6]. There is a great need to improve access to and coordination in peri-conceptional, ante-natal and perioperative care to improve morbidity and mortality in children with NTDs especially in developing countries with resource limited settings [7]. The possibilities of stillborn babies or early abortion also exist. Multifactorial traits with genetic and environmental factors contribute towards its etiology. Considering the environmental factors, recent studies suggest that 400-800 μg per day of folic acid supplementation should be recommended by the clinicians to women who are at risk for recurrent neural tube defect (NTD) instead of the age old practice of 4 mg as the current understanding of folic acid metabolism during pregnancy suggests that at higher doses, above ∼1 mg, there is no increased absorption [8].

Many developmental genes have a role to play in neural tube formation; any modifications in these genes could lead to foetal deformities. The genes of PAX family, T (Brachyury) transcription factor T gene, BRCA1 and PDGFRA (platelet derived growth factor alpha gene) in mouse models may have a role leading to NTDs [9]. One of the important is the members of the paired box (PAX) gene family whose significance is highlighted by abnormalities arising from expression of mutant PAX genes. In mammals, there are 9 types of PAX genes (PAX 1-9) [10]. The gene encodes for a class of related embryonic transcription factors that contain a DNAbinding “paired domain” [11], which is built of 128 amino acids (384 nucleotides). It has tissuespecific expression during development. It was observed that PAX1 gene mutations may cause ineffective vertebra development and NTD such as of spina bifida occulta [11]. In a mouse strain undulated, various vertebral anomalies occur as a result of mutations in PAX1 gene. PAX1 transcription factor may also trigger another gene PDGRFA which can further cause NTD. High frequency of NTD has been observed in a mouse line produced from crossing an undulated (un-mutated PAX1 gene) and Patch (Ph, mutated PDGFRA gene) [12]. Considering the above facts the present study was conducted to assess the role of maternal PAX gene mutations in the causation of NTD affected pregnancies in North Indian Population.

The study included 100 mothers (cases) of clinically diagnosed cases of NTDs in the current pregnancy selected from live births, stillbirths/ terminations and ante-natal clinic, and 100 controls mothers with no history of unsuccessful pregnancy or abnormal conception. Approval by Institutional Ethical Committee following ethical guidelines for biomedical research on human subjects of Indian Council of Medical Research, New Delhi, India, was obtained before the start of the study. The samples were collected from four Government hospitals of Delhi, India. Information, using structured questionnaire, and blood samples were collected from all the subjects, in EDTA vials, after obtaining informed written consent. The collected samples were given a code irrespective of the case and control status of the participating mothers. High Resolution Melting Curve analysis was used to find the sequence variations in the paired domain region (i.e. exon 2) of PAX1 gene. The individual PCRs were carried out on Roche’s Light Cycler 480 using specially formulated Master Mix known as Light Cycler 480. High Resolution Master Mix containing propriety saturated Reso Light melting dye. 2 μl of a 10 ng/μl solution of each DNA sample was added to 13 μl of PCR mix in 96-well plates, as well as 2 mM MgCl2 and 0.2 μM of forward and reverse primer of individual pair. The samples amplification was carried out at primer-specific annealing temperatures, followed by cooling down to 40oC. High resolution melting curve data were obtained at a rate of 25 acquisitions per degree Celsius, starting from 65°C to 95°C. Fluorescence data were visualized using normalization, temperature-shifting, and difference plotting, and then analyzed using the automated grouping functionalities provided by the Light Cycler 480 Gene Scanning Software. The automated groups thus formed, can be observed in normalized and shifted melting curve plot (FIGURE 1). The amplicons with shifted melting curves (variant curve) and randomly chosen representative amplicons without shifted melting curves (normal curve) were subsequently subjected to DNA re-sequencing. Further to distinguish homozygous mutant from homozygous wild type, which sometimes gives similar melting curves, all the samples were reanalyzed in the presence of identified homozygous wild type. The sequence data was analyzed for the variations by manual matching and online sequence alignment software, ClustalW2 (http://www.ebi.ac.uk/Tools/msa/clustalw2). 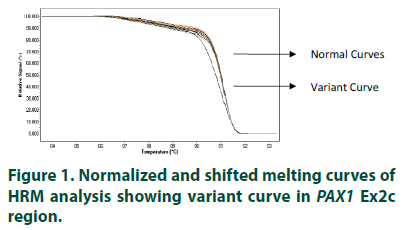 The normalized and shifted melting curve analysis for PAX1 Ex2c suggested variation in 4 cases (4%), whereas none of the controls were found to have any variation. Four samples with variant curves and randomly chosen four samples showing normal curve were amplified and sequenced. The sequencing and alignment results suggested variation in the all the samples with variant curve, whereas no variation was observed in the other four samples with respect to reference sequence available at National Centre for Biotechnology Information (www. ncbi.nlm.nih.gov).The variation was identified as polymorphism at 609 nucleotide position (G609A) in Exon 2 of PAX1 gene (FIGURE 2). All four samples were found to have the polymorphism in heterozygous condition and the results were found to be consistent in the repeat analysis. Characteristic of cases carrying variant allele of G609A PAX 1 gene polymorphism is given in (TABLE 1). Numbers of samples showing curve variations in the four segments of paired domain region are represented in (TABLE 2).

The minor allele frequency was found to be 0.02 among cases only. It was further observedthat all the four case mothers carrying 609A allele of PAX1 gene belonged to young maternal age and not consumed folic acid during peri-conception period. Three of the four mutant allele carrier mothers were adhering to pure vegetarian dietary habits. The distribution of NTD type was found to be same, with two mothers of anencephaly and two of spina bifida.

Although the embryonic PAX genes are expressed during development, however, maternal counterpart was selected for the study to understand the role of maternal genotypes in causation of NTD. Maternal genomic imprinting effect for multiple SNPs in PAX genes has been observed previously which influenced the risk of CL/P on the developing fetus [13]. According to National Center for Biotechnology Information (NCBI) database (http://www.ncbi.nlm.nih.gov), there are 11 variations reported in PAX1 gene; and only three variations till date have been reported in exon 2 with no sequence variation effect on the protein function (based on bioinformatic analysis SIFT and PolyPhen, available at Ensemble genome database; http://www.ensembl.org). In the present study, G609A (rs17861031), resulting in no amino acid change (K185K), was observed among 4 case mothers and none among control mothers. Minor allele frequency (A allele) was found to be very low (0.02) when compared with the previously reported MAF (0.08; NCBI database). It was reported this polymorphism in 2 cases of Klippel–Feil syndrome (a vertebral defects) and 2 controls, with no statistical significant difference [14].

Limited information is available on the role of 609 G-A polymorphism. The polymorphism results in no amino acid change falling in the category of silent mutations. However, the silent mutations have the potential to be pathogenic if they activate cryptic splice sites, leading to exon skipping [14]. They may also have functional roles in splicing and/or messenger RNA (mRNA) stability, and can be implicated in our understanding of the diseases [15]. They can also affect speed and accuracy of protein synthesis, i.e. gene’s translational efficiency, which depends on the abundance of codon specific transfer RNAs (tRNAs) [16-18]. Further, high incidence of lumbar spina-bifida was observed among the litters resulting from a cross between undulated (un) and patch (ph) mice, an another mouse mutant, exhibiting NTD, with mutations in platelet-derived growth factor receptor-α (PDGFRα) gene [19]. Pathogenesis of silent mutations has been previously described in other diseases such as limb girdle muscular dystrophy [20]. The possibility remains that PAX1 gene mutation alone or in conjunction with other genetic or environmental factors might play a role in the pathogenesis of Neural tube defects [14]. Appearance of NTDs is the result of multifactorial causes, so it is very difficult to relate the errors with PAX1 gene, despite knowing its entire stake in these defects. The preliminary findings of the present study may suggest (although to a lesser extent) the possibility of an effect of the PAX1 G609A polymorphism, a silent mutation on the occurrence of neural tube defects among children. However, large scale trio studies are required to understand the role of maternal imprinting to bring out conclusive results on this hypothesis.

The authors acknowledge the financial support provided by Indian Council of Medical Research (ICMR), Government of India, and New Delhi. Sincere thanks to all the subjects andhospitals for providing the valuable information and blood samples. 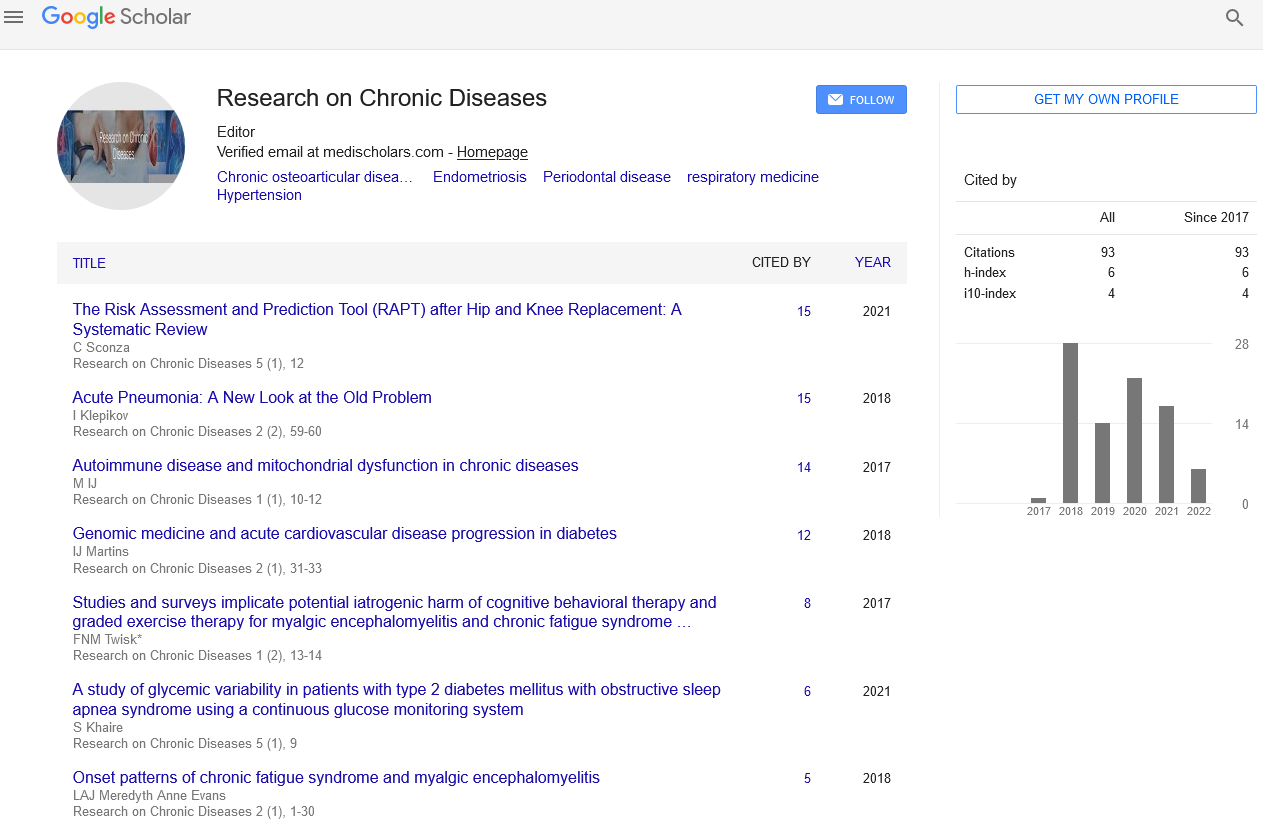