Proximal Anomalous connections of the coronary arteries (ANOCOR) are rare and their association with Acute Coronary Syndrome (ACS) is even rarer.

We report the case of a patient who had an acute coronary syndrome with a ST Segment Elevation Myocardial Infarction (STEMI) of atherosclerotic origin with a proximal anomalous connection of the left anterior descending artery and of the circumflex artery, both arising from the antero-right sinus. We opted for angioplasty first of the right coronary artery which was responsible for the myocardial infarction, and secondarily of the circumflex artery after eliminating a high-risk path for sudden death.

Proximal Anomalous connections of the Coronary Arteries (ANOCOR) are a rare entity with an angiographic prevalence averaging 1% [1]. In most cases, these anomalies are incidental findings with no clinical significance; however, it can cause angina, myocardial ischemia and Sudden Cardiac Death (SCD), particularly if associated with a proximal course between the aorta and the pulmonary trunk. Anatomic and radiologic knowledge of major congenital coronary abnormalities and some catheterization skills can avoid a delay of a beneficial coronary reperfusion.

We report a challenging case of a patient presenting with an inferior ST Segment Elevation Myocardial Infarction (STEMI) in whom we discovered all coronary arteries connected to the right sinus. In addition to this, the patient presented tight stenosis on both ectopic and non-ectopic arteries. Through this case, the authors aimed to put the light on how to manage an ANOCOR especially in the setting of an ACS.

We present the case of a 63-year-old Moroccan female with a history of hypertension under Perindopril and 25 years of poorly controlled diabetes mellitus under Metformin and insulin, who presented to the emergency department with acute chest pain that occurred 36 hours before admission. The patient didn’t report any history of angina, syncope or heart disease. Coronary angiography with radial access was not possible due to a chronic occlusion of the subclavian artery, femoral access was then performed and revealed an empty left sinus, with both Left Anterior Descending artery (LAD) and Left Circumflex artery (LCx) connected to the Right Coronary Sinus (RCS) and a nonectopic Right Coronary Artery (RCA) with a tight thrombotic stenosis on its middle segment; two significant stenosis on the ectopic LCx which was connected to the right sinus just below an undiseased ectopic LAD (Figure 2). An ad-hoc angioplasty of the culprit lesion of the RCA was performed with a drug-eluting stent (Figure 3). The angioplasty of the ectopic LCx was postponed in order to perform a gated cardiac Computed Tomography (CT) to confirm the artery’s course before any further treatment. The coronary CT confirmed the angiographic findings and showed all the three arteries arising from the RCS. The RCA was connected to the RCS with a permeable stent, followed by the ectopic LCx below the RCA with a retroaortic course and two significant stenosis both proximal (8.5 mm from the origin) and distal (25 mm from the origin in the retroaortic course). At last, the ectopic LAD was connected to the RCS above the RCA with a pre-pulmonic course (Figure 4). No high risk of sudden death preaortic course was detected and no signs of artery compression or obstruction were found. Therefore, surgery was not considered and we performed a second coronary angiography with the successful stenting of the LCx lesion with two drug eluting stents (2.5 × 32 mm and 2.5 × 20 mm) using a guiding catheter Judkins Right 4 (JR4) 6 French (Figure 5). The patient was treated with Dual Antiplatelet Therapy (DAPT) with clopidogrel and aspirin, in addition to Atorvastatin, Bisoprolol and Perindopril. She was discharged from the hospital in stable condition and was closely followed-up as an out-patient since then. ANOCORS are very rare with a prevalence ranging from 0.2%- 1.3% in the literature [2]. The majorities are considered benign and are often asymptomatic, usually discovered as incidental findings at the time of catheterization. However, some forms are considered high risk of sudden death and can be responsible of myocardial ischemia and Sudden Cardiac Death (SCD). The priority when an ANOCOR is found is thus to assess its potential severity. For anatomical shapes considered benign, therapeutic abstention is the rule; however, for those considered high risk of sudden death we must recognize the current lack of a consensual attitude.

According to data from the “ANOCOR registry” [1] connections in the contralateral sinus or artery are the most frequent (nearly 90%), while the connections in the non-coronary sinus or in the pulmonary artery remain exceptional, as well as single coronary arteries. The LCx is involved in almost half of cases (47.4%) and the RCA in a third of cases. Left Main Coronary Artery (LMCA) (12.1%) and LAD (5.4%) are less often concerned. In our case we had both LCx and LAD connected singly to the RCS. The other important anatomical point to consider is the initial ectopic course of the ANOCOR, defined between the abnormal connection and the point where the artery joins a usual myocardial area. It’s important to know that some courses are more frequent depending on the coronary artery involved: The initial course of an ectopic circumflex is almost exclusively retroaortic which was the case for our patient, a right ANOCOR is associated with a pre-aortic path in nearly 90% cases, the Left Main Coronary Artery (LMCA) and LAD can be associated with all types of courses, specifying that the retropulmonary course is the most frequent (almost one case in two) like in our case and that the pre-aortic pathway is very rare (close to 5% of case) [1] (Figure 6). 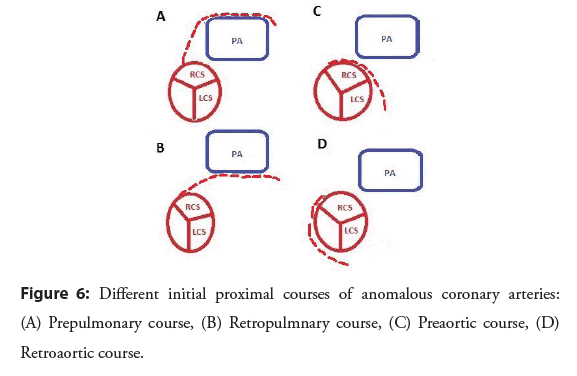 Our patient had severe atherosclerotic lesions in both ectopic and non-ectopic arteries, her age and the presence of an old unbalanced diabetes mellitus may explain the severity and the diffusion of the atherosclerotic pathology. The question in front of such an association is whether the congenital anomaly may have played a role in the development of atherosclerosis. It is then necessary to distinguish the site of the lesion responsible for the coronary syndrome, either it happened on the ectopic coronary segment as defined above, or it sits on the non-ectopic segment [3]. Bouzerda, et al. described a similar case of a 65 years patient who presented with for high-risk Non ST Elevation Myocardial Infarction (NSTEMI) in whom coronary angiography accidentally discovered an anomalous connection of the left coronary network from the right anterior sinus [4]. However, unlike our case, only the LAD (culprit lesion) had a significant stenosis, the rest of the non-ectopic coronary arteries were moderately atheromatous without significant stenosis.

Analysis by endocoronary ultrasound of ANOCOR with an intramural pathway and fortuitous discovery at an age>35 years suggests that an intramural pathway would have little or no risk of atherosclerosis [5]. The mechanism of a possible protective role of constituents of the arterial wall remains unknown. An inverse situation is suggested for the ectopic segment of an ANOCOR involving the circumflex artery. Some studies have shown an increased prevalence of coronary atheroma in an ectopic circumflex artery [6]. Our case confirms these findings since our patient had two atherosclerotic lesions on her ectopic circumflex artery.

In ANOCOR, the severity of certain anatomical forms is well established while the large majority is generally considered to be benign. Among these, we can cite the forms with an initial prepulmonic or retroaortic course. On the other hand, an initial preaortic also called interarterial course must always be taken into consideration. It is well-established that ANOCORs with a preaortic path can be responsible for the occurrence of SCD [7].

The usual profile is a young subject (<35 years) without any cardiovascular history. Serious cardiac events (sudden death, syncope) generally occur during (or just after) intense physical exertion and more particularly in sport practice. The pre-aortic course mainly concerns the LMCA or the LAD, but also the RCA. The frequency of a pre-aortic course is higher for the RCA than for the LCA due to a connection often close to the anterior commissure of the RCA [6]. In an autopsy series of 242 congenital coronary anomalies, 49 ectopic LMCA connections were individualized from the RCS and 52 ectopic connections of the RCA from the left sinus [7]. In this series, 57% of left ANOCORs and 25% of right ANOCORs were associated with SCD, with in the majority of cases the presence of a pre-aortic course. The particularity of this pathway is its mode of discovery, often SCD occurring in teenagers or young adults during violent exercise.

The evaluation and management of patients with high risk ANOCOR should be best discussed by a dedicated multidisciplinary team (cardiologists, radiologists, and surgeons with experience in the ANOCOR field). A standardized algorithm, regularly revised, should allow optimal decision-making for each patient according to the initial presentation and diagnostic work-up. Vast majority of ANOCORs high risk of sudden death may remain asymptomatic for a long time, ischemic symptoms that may mimic a coronary artery disease, are possible. ANOCOR diagnosis is made by invasive coronary angiography or Coronary CT Scan. Given the difficulty to demonstrate myocardial ischemia by functional noninvasive tests in ANOCOR, it seems acceptable to consider nonequivocal symptoms (angina, dyspnea, and syncope, especially on exertion) as ischemic symptoms, even if documented myocardial ischemia is lacking. Silent myocardial ischemia and severe ventricular arrhythmias must be taken into account in the same way [8].

The published literature of Percutaneaous Coronary Intervention (PCI) for ANOCOR with an interarterial course remains limited [8,11]. The place of PCI is only addressed in AATS guidelines [9], for adults with high risk for surgery (Class IIb/Level C). Patients aged over 30 years with right ANOCOR associated with ischemic symptoms and/or documented myocardial ischemia represents the potential population eligible for PCI. PCI guidance by Intravascular Ultrasound (IVUS) is recommended for the evaluation of the ectopic segment (diameters, area, and length) and for the control after stenting [11]. Direct stenting is recommended [8].

Anomalous connection of the coronary arteries is a very rare condition especially in the sitting of acute coronary syndrome. Knowledge of the main ANOCORs and their particularities is very important to manage these situations. Coronary CT scan remains a valuable tool to assess the initial course of the ANOCOR, the relationship between the ANOCOR and the principal vessels and the existence of an aortic intramural pathway to establish the risk of SCD and thus consider surgery.