Long term follow up of an early oligoarthritis cohort shows that early aggressive intervention leads to drug free remission after 10 years: results from the LOTO study

Objective: To report the long-term outcome in the long-term follow up of the Leeds Early Oligoarthritis Cohort. Methods: Cross-sectional follow up of patients who participated in two previous interventional studies. Subjects were invited to either attend for a single study visit or a telephone consults. Presence/absence of any musculoskeletal symptoms and current diagnosis was recorded. Blood tests for inflammatory markers and radiographs of SIJs or any relevant joints were performed only if clinically indicated to establish a diagnosis if persistent clinical symptoms. Results: Follow up data were available from 63.3% (n=74 patients) of the initial cohort (n=117 patients) [mean SD disease duration at presentation 11.8 ± 1.8 months; disease duration at follow up: 13 ± 3 years]. Of these 74 patients, 63.51% (n=47) had persistent arthritis since the end of the previous studies (19.5% were RF positive; 33.3% anti-CCP positive and 32.4% HLA-B27 positive). The majority (75%) had received joint steroid injections sulfasalazine on the original study protocols. Oligoarthritis was still the predominant articular pattern in 68% of the patients at follow up and over a third of patients (36.5%) were in clinical remission (4% and 17.4% RF and HLA-B27 positive respectively). Conclusion: Ten-year follow up of an early oligoarthritis cohort shows that over a third of patients attending for review are in drug free clinical remission.

Oligoarthritis is an inflammatory arthritis affecting ≤4 joints [1,2]. It represents either an early clinical presentation or a unique disease phenotype within the conditions collectively termed the seronegative spondyloarthropathies (SpA). Oligoarthritis typically affects young people causing high morbidity [3-5] and it may have a variable outcome although long term follow up data are sparse [5-8].

The majority of published studies have only reported on short/middle term outcomes. Some reports have described as many as 75% of patients with ReA having persistent disease at 6 months [6], whereas other cohort studies have suggested rates of persistence as low as 15% [5]. In our first study, at 12 months of follow up, 51% of patients satisfied criteria for complete response (absence of synovitis) [1]. In the second study, at 12 months, up to 81% of the patients in the early intervention group had no clinical evidence of synovitis compared with 57% of the patients in the conservative group [2]. Both reports indicated a significant benefit from an early intervention protocol in the short term, with better results in the second study, suggesting that this may have been due to the early use of sulphasalazine (SSZ) as a DMARD.

In the current report we aim to assess the long term follow up of these patients, we were interested in particular, to assess the prognostic role of biomarkers such as HLA-B27 and RF.

This is a single-centre, single time-point observational study of long term follow up of patients presenting with an early oligoarthritis (disease duration <12 months) from two historical cohorts of the Leeds Early Arthritis Clinic EAC [1,2]. In the first study, subjects were treated with a protocol of intra-articular steroid injections into all clinically involved joints [1]. In the second, subjects were randomized into an early intervention group with intra-articular steroid injections into all synovitic followed by DMARDs therapy with sulfasalazine or initial treatment with NSAIDs followed by intensive treatment on the second group [2].

For the present report, subjects were identified through clinical records and were invited through letter to either attend for a single study visit or a telephone consults. Patients who did not respond to this first invitation were then contacted by telephone and invited to answer a short questionnaire. Data collected included demographic variables. Investigations such as CRP or radiography (sacro-iliac joints/lumbar spine or any relevant joints) were only performed in attenders in case of clinical need or to clarify the diagnosis when applying the ASAS criteria for classification of axial spondyloarthritis [9], modified New York criteria for AS [10], CASPAR criteria for Psoriatic Arthritis [11] or the new ACR RA criteria [12]. All patients signed informed consent and the study had the approval of the local ethics committee.

Predictors of outcome recorded include the HLA-B27 status (positive or negative), early intervention therapy with steroid injections and/ or SSZ, number of swollen joints at the onset of the disease, disease duration from symptom onset and baseline RF. Anti-CCP status was recorded at follow-up as this test was not available at time of study design. Variables were analyzed in a descriptive manner.

The original cohort comprised of a total of 117 patients, of whom 5 were deceased. A total of 112 patients were contacted, of whom 63.3% (n=74) [56.76% (n=42) male: 43.24% (n=32) female; mean ± SD disease duration at presentation was 11.8 ± 1.8 months; with a disease duration of 13 ± 3 years at follow up] consented to for follow up. Of these 112 patients contacted, 19.64% (n=22) attended for a hospital review visit; 25% (n=28) were assessed via telephone consult and 21.45% (n=24) had data extracted from the clinical notes. A total of 37 patients could not be reached either by letter or by telephone. Only one of the patients contacted declined consent to participate in the study. Analysis of the 74 attenders showed that 63.51% (n=47) of the patients had had persistent arthritis since the end of the initial studies (19.5% RF positive; 33.3% anti-CCP positive and 32.4% HLA-B27 positive at follow up). The majority (75%) had received joint steroid injections ± SSZ on the initial study protocols. Only 19% had a monoarticular presentation. The majority of patients (82%) had an oligo-articular pattern at disease presentation and this was maintained over time in 68%. Fifteen percent (15%) had evolved into a mixed phenotype with axial and peripheral joint involvement. Total resolution of symptoms was documented in 36.5% of patients (4% and 17.4% RF and HLA-B27 positive respectively) who had remained asymptomatic in this time with no hospital follow up. The majority of these (57.7%) had an oligo-articular pattern at initial presentation and 42.3% presented with a mono-arthritis. Sixty five percent and 5.40% had received joint steroid injections or SSZ respectively in the previous studies. Eight out of ten who was RF positive at baseline evolved into polyarthritis (Table 1). The distribution of diagnosis continued to change from the time of the first evaluation at the two previous studies throughout the observation period (Figure 1). Regression analysis to evaluate predictors of outcome was not possible due to the low patient numbers. 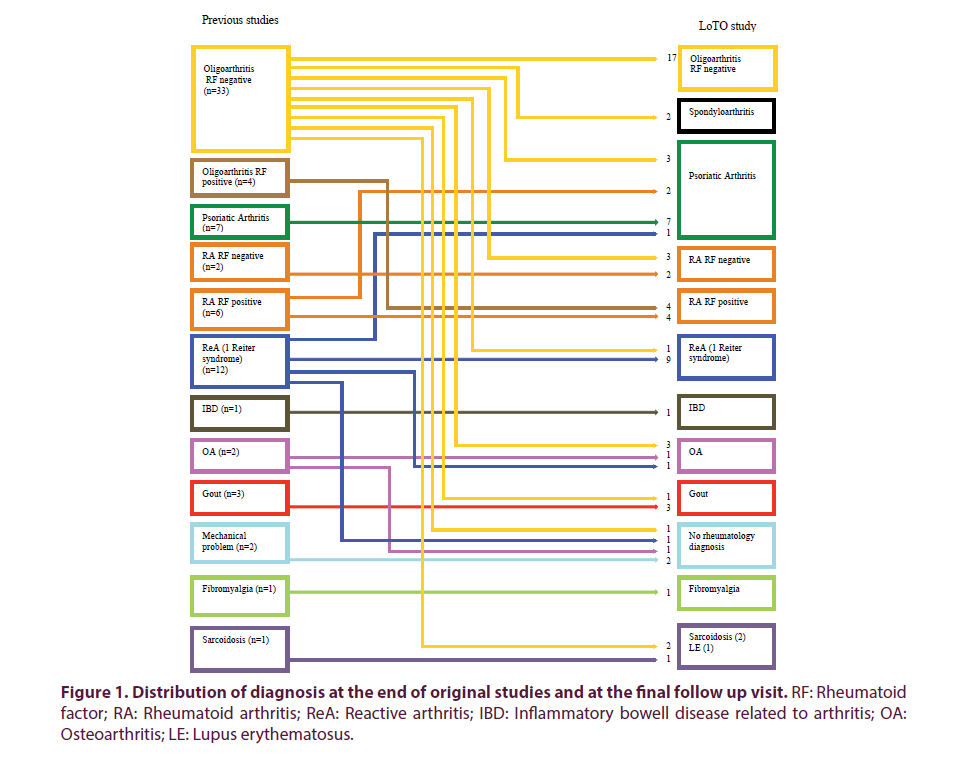 Oligoarthritis is a common condition with a variable outcome that typically affects young people and can lead to high morbidity. However long term follow up data are sparse [13-15]. Our original reports [1,2] showed that prompt intervention in early oligoarthritis led to significant improvements in clinical outcomes when compared to a more conservative approach using NSAIDs. The aim of the current project was to report on the long-term outcome of an inception cohort of patients, with early onset of oligoarthritis to identify prognostic factors.

Our results show that up to 65.4% and 5.40% of the patients that remained asymptomatic at follow up had received joint steroid injections or SSZ respectively in the previous studies, but when we compare this to patients who had persistent arthritis over the years there is no statistically significant difference. One explanation for this could be the small numbers of patients followed up. We believe that the real percentage of patients in remission among this group could be much higher than the 36% found, and that this may be the reason why subjects have not remained under follow up. This is an important limitation of our study but common with follow up of longitudinal cohorts. A substantial number of subjects from our initial cohort were young adults attending university who represent a highly mobile group and we were unable to track them down after the years.

Only a few studies have reported long-term outcome in uSpA or oligoarthritis for prognostic factors. Sampaio-Barros et al. [13], published data on 5 to 10 years follow up for 105 and 42 uSpA patients respectively with a mean disease duration at onset of 5 years. Huerta-Sil, et al. [14] reported the findings in 50 patients with peripheral arthritis and inflammatory back pain with disease duration of 5.4 years after 3-5 years. In Kumar’s long term follow up (11 years) study [15], 22 patients, all of them with inflammatory back pain and a high proportion of peripheral arthritis, had mean disease duration at onset of 8 months. In a recent multicentre cohort study [16] 440 children with juvenile idiopathic arthritis were followed for up to 7 years after disease onset. By comparison, the Leeds Cohort represents a unique inception group by virtue of its very short symptom duration at the time of clinical presentation which was of 10 weeks (median) on the first study [1] and 16 weeks in the second study [2]. In addition, follow up averaged 14 years in some cases, which makes this the largest long term study of patients presenting with oligoarthritis.

Another limitation of our study comes from the fact that only 29.73% of the 74 patients attended for a hospital visit with the majority feeling there was no need for it as they were completely asymptomatic. Indeed, 27 patients (36.49%) were assessed via telephone consult and in the remaining (32.43%) data were collected from clinical notes as these were still regular hospital attenders.

In conclusion, ten-year follow up of an early oligoarthritis cohort shows that over a third of patients attending for review are in drug free clinical remission. The majority had received joint steroid injections ± SSZ early on in their disease onset. These results can throw important insights into the pathogenesis of this condition and provide useful guidance for clinicians managing these patients.

No, there is no conflict of interest.

CCG received a grant from The Spanish Foundation of Rheumatology.