Rheumatoid Arthritis (RA) is one of the most prevalent autoimmune disease which may lead to a shorter life expectancy and lessened personal satisfaction. it is driven by effector T cells, particularly Th17 cells which possess a proinflammatory activity via the production of potent proinflammatory molecules IL-17. We aimed to assess and find possible correlations between the 28-joint Disease Activities Scores (DAS28), Th17 cells frequencies and IL-17 serum levels, and evaluation of the effect of anti-rheumatic therapy on Th17 cells and IL-17 levels. The frequencies of the circulating Th17 cells and serum levels of IL-17 were quantified using flow cytometry analysis and ELISA, respectively, in RA patients both before (baseline) and four months after anti-rheumatic therapy. Th17 cells in Peripheral Blood (PB) and serum IL-17 were found to be significantly increased in RA patients than in controls. The frequencies of circulating Th17 cells, the serum level of IL-17, and DAS28 score showed significant decline after therapy, the circulating Th17 cells, the serum levels of IL-17 were positively correlated with DAS28, also Th17 cells significantly correlated with serum IL-17. This study demonstrated increased level of Th-17 cells and serum IL-17 in RA indicating a role in pathogenesis and disease activity.

Rheumatoid Arthritis (RA) is considered one of the most prevalent autoimmune diseases, which is represented by the chronic and progressive inflammation of multiple organs, mainly the synovia of joints leading to their damage, a shorter life expectancy, and lessened personal satisfaction. Several aspects of the altered immune functions and regulation in RA remain controversial although the valuable data regarding the immunopathogenesis of the disease [1].

RA patients show an expansion of Th17 cells in circulation was found to be the most prevalent disorder found in all RA patients irrespective of the disease duration [2].

Th17 cells are described as a specific subset of CD4+ helper T cells, of which differentiation is under control of the transcription factor retinoic acid-related orphan nuclear receptor (RORγt). Th17 cells selectively produce the signature cytokines such as IL-17, and IL-21, and have been explored to play a critical role for the chronic inflammatory response and joints destruction in RA patients [3].

Th17 cell was identified as the only osteoclastogenic helper T-cell subset as Th17 cell derived IL-17 has been demonstrated to be a strong promoter for the osteoclastogenesis mainly via induction of receptor activator of NF-κB ligand (RANKL), the cardinal stimulator for osteoclast development, on synovial fibroblasts and osteoblasts, and amplifying erosion in the marginal bone of peripheral joints in active RA patients [4].

In addition, IL-17 induces the production of TNF-α, IL-1β and IL-6 in numerous cell types and can act with TNF-α to stimulate the release of pro-inflammatory cytokines and chemokines from synovial fibroblasts, leading finally to cartilage loss [5].

The Th17 cells depleting or IL-17 antagonizing therapy, which has the efficacy to ameliorate the chronic inflammation within peripheral synovial joints in the most of active RA patients [6].

This work was planned to study Th17 cells and IL-17 in RA patients depending on many items including the following; quantification of circulating Th17 cells, determination of serum level of IL-17, followed by comparison of Th17 cells and IL-17 results between RA patients and healthy control. Furthermore, detection of possible correlations between Th17 cells frequencies, IL-17 serum levels in RA and DAS28 which was developed by canonical discriminant analyses and validated for criterion, correlational, and construct validity and was able to discriminate between high and low disease activity as indicated by clinical decisions of rheumatologists [7]. Finally, evaluation of the effect of antirheumatic therapy on the percentages of Th17 cells and IL-17 levels among RA patients.

The study was conducted over a period of one year where all individuals were interviewed, and the study aspects were explained in detail to everyone, then a written informed consent was taken, and the study was approved by the local ethics committee of the Faculty of Medicine, Mansoura University.

A total of thirty patients; 22 females and 8 males, mean age ± SD (41.2 ± 11.9 years), who fulfilled the 2010 revised criteria of American College of Rheumatology for RA [8], were included in our study. They are evaluated before (baseline) and four months after treatment. Thirty healthy persons were also, included in our study as a control, mean age ± SD (45.30 ± 7.34), with inclusion criteria: normal laboratory finding of CBC, Rheumatoid Factor, the Erythrocyte Sedimentation Rate (ESR), and C-Reactive Protein (CRP), no history of attending orthopedic or rheumatology clinics or symptoms suggestive of rheumatoid arthritis.

All patients will be assessed according to 2010 American College of Rheumatology Classification. The patient was diagnosed as definite RA patient by presence of 6 or more criteria. Disease activity was assessed with DAS28.

Aliquots of 1 ml of the sterile heparinized entire blood were invigorated with a mix of 25 ng/ml of phorbol myristate acetic acid derivation and 1 μg/ml of ionomycin and incubated for one hour at 37°C in a humidified 5% CO2 incubator. 10 μg/ml of Brefeldin-A was added to the entire blood to inhibit intracellular protein transport. Activated blood samples were washed in wash buffer then stained with 10 μl of FITC-conjugated CD4-specific mAb and PC5-conjugated anti-CD3 for 30 minutes at room temperature. Erythrocytes were lysed by including 2 ml of FACS lysing solution. After 10 min. incubation, the specimens were centrifuged and washed with 0.1% Bovine Serum Albumin (BSA)-PBS, and then fixed with 100 μl permealizing reagent for 10 min. After washing, 100 μl of saponin reagent was incubated with the pellet for five minutes at room temperature in the dark. The samples were washed twice with 0.1% BSA-PBS and then incubated with PE-conjugated IL-17-specific mAb for 30 min at room temperature in the dark. An isotypic control IgG1-PE was utilized for the IL-17 staining at room temperature in the dark. Then the cells were washed and quickly analyzed using flowcytometry. For each sample at least 50.000 events were acquired on a FACS Canto ІІ which is equipped with blue (488 nm, air-cooled, 20-mW solid state, red 633 nm, 17-mW HeNe, and violet (405 nm, 30-mW solid state) and analyzed with the FACS DIVA software system. The results were analyzed using Winlist 3D 7.1 (Verity software house, USA).

Serum levels of IL-17 by ELISA

Statistical analysis of the present study was conducted, using SPSS V.19 and graph Pad prism V. 5 on Windows 8. Categorical data were presented in the form of frequencies and percentages. Whereas, continuous data were presented in the form of mean ± standard deviation (mean ± SD). Paired and unpaired Student's t-tests was used to compare pretreatment and post-treatment data. Pearson’s correlation test was used to study correlations between different groups. All tests were considered significant if p value less than 0.05. 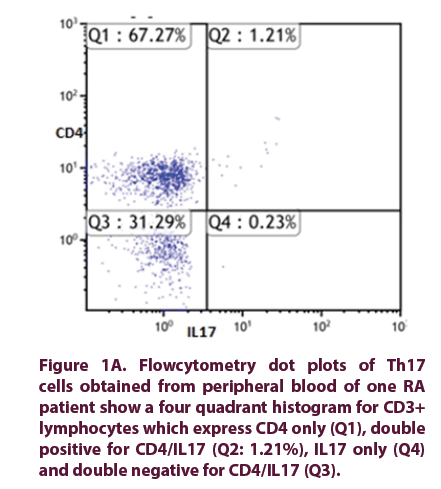 Figure 1A: Flowcytometry dot plots of Th17 cells obtained from peripheral blood of one RA patient show a four quadrant histogram for CD3+ lymphocytes which express CD4 only (Q1), double positive for CD4/IL17 (Q2: 1.21%), IL17 only (Q4) and double negative for CD4/IL17 (Q3). 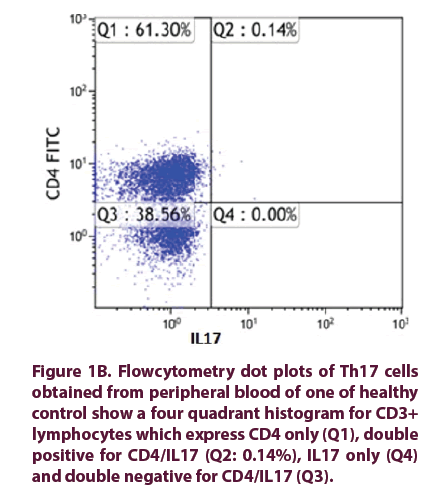 Figure 1B:Flowcytometry dot plots of Th17 cells obtained from peripheral blood of one of healthy control show a four quadrant histogram for CD3+ lymphocytes which express CD4 only (Q1), double positive for CD4/IL17 (Q2: 0.14%), IL17 only (Q4) and double negative for CD4/IL17 (Q3). 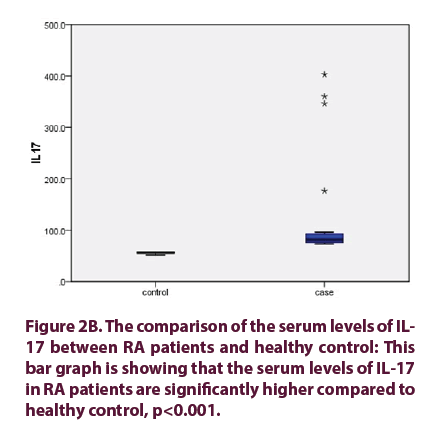 Table 2. Pearson correlations between the frequencies of circulating Th17 cells, the serum levels of IL-17 and DAS28 before anti-rheumatic therapy.

Dysregulation of cytokine action or production is considered to have a central role in the progress of RA. Previously, RA had been considered a Th1-cell-mediated disorder and therefore was thought to be driven by a population of T cells producing inflammatory cytokines such as TNF, IL-2 and interferon. It was thought that increased production of IL-17 and up-regulation of Th17 cells are common of RA features [9].

Our study declared that the percentage of peripheral Th17 cells in RA patients, mean Th17 cells were significantly higher than healthy control, (p<0.001).

Many studies concur in our results and reported that Th17 cells percentages in peripheral blood were found to be significantly increased in RA patients than in healthy control which can be explained by the fact that Th17 cells were considered as a dominant pathogenic cellular component in autoimmune inflammatory diseases, including RA [10-12].

Th17 cells possess a proinflammatory activity via the production of potent proinflammatory molecules IL-17, IL-17F, IL-21, IL-26 and G-CSF as well as the chemokine CCL20. Therefore, Th17 cells are potent inflammatory mediators that are due to the ubiquitous expression of their effecter cytokine receptors, with several contributions to RA [9]. These findings are supported by different studies that found an increase in serum levels of IL-17 in RA patients compared to healthy control [7,10,11,13,14].

These results may be due to the role of MTX, which acts by competitive inhibition of DHFR leading to inhibition of enzymes involved in purine metabolism, which causes inhibition of T cell activation and suppression of intercellular adhesion molecule expressed by T cells.

These finding meet the finding of the reduction of Th17 cells in peripheral blood of RA patients after treatment including combination of TNFi (adalimumab) and MTX [11,12].

In addition to data which indicated that the frequency of Th17 cells were decreased following only 4 weeks of MTX and glucocorticoids therapy, the level of Th17 cells in the peripheral blood of RA patients was reduced because of infliximab, adalimumab and etanercept after 4-8 weeks [2].

In our study, the serum levels of IL-17 in RA patients showed significant reduction after 4 months of taking anti-rheumatic treatment, (p<0.001), which may be due to the function of MTX that inhibits Th17 cells proliferation and activation with subsequent reduction of IL-17.

These results run in accordance with those which reported that the circulating Th17 cells were positively correlated with DAS28 scores [10,12].

The RA morning symptoms are linked to the abnormal increase in night inflammation, favored by inadequate cortisol secretion under conditions of active disease. Therefore, exogenous glucocorticoid (prednisone) treatment is suggested in RA at low doses since it may partially act like a ‘replacement therapy’. Also, MTX was found to improve RA symptoms. These data match our analysis, which revealed that peripheral Th17 cells percentage is significantly correlated with DAS28 improvement rate in RA patients [15]

These findings are reinforced by studies which reported significant positive correlation between IL-17 and DAS28, concluding that the elevated serum IL-17A levels in RA patients parallel the degree of disease activity [9-11,16]. Th17 cells and IL-17 play an important role in RA pathogenesis and that the level of IL-17 in the peripheral blood is associated with increased disease activity and articular destructive effects, such as joint erosion, synovitis, and effusion in RA patients [17]. The increased IL-17 was found in the RA peripheral blood and synovial fluid is associated with increased disease activity [18,19].This might highlight the efficiency of the serum level as predictive item in determination of RA activity; IL-17 can be used as a specific therapeutic target for RA treatment.

In general, MTX as a monotherapy was able to effectively limit the Th17 cells populations only in the patients with early disease. Treatment with MTX and methyl prednisolone could improve RA disease activity by normalizing the distribution/ imbalance of Th-17/Treg and could demonstrate a new regulatory performance of IL-17 cells in RA patients, suggesting the role of IL-17 in RA activity [20].

It is also a matter of debate whether the observed reduction in Th17 cells prevalence after administration of anti-rheumatic therapy is transient or is maintained for a longer period. Therefore, RA should be followed up for longer periods.

From this study, we can conclude that the frequency of peripheral Th17 cells is a good diagnostic tool for RA patients due to their presence in higher concentration in peripheral blood of RA patient’s more than healthy control. Regarding that, peripheral Th17 cells are positively correlated with DAS28 in active RA patients, suggesting that increased peripheral Th17 cells are good indicator for active disease. The mean serum IL-17A level in patients with RA is coincided with disease activity. This might highlight the efficiency of the serum IL-17A level in determining the activity and prognostic patterns, to aid in aggressive disease therapy, and it might express specific therapeutic targets.

The authors report no conflict of interest