Current study reported that early detection and early rhythm control therapy in patient with Atrial Fibrillation (AF) was associated with a lower risk of cardiovascular outcomes than usual care for AF. Early detection and early treatment for AF is important. However, subclinical AF is likely to go undetected and untreated, because patients with subclinical AF had no symptoms. It is unclear the relationship subclinical AF and Heart Failure (HF). This review summarizes the relationship between subclinical AF and HF hospitalization in patients with cardiac dysfunction using Cardiac Resynchronization Therapy Defibrillator (CRT-D).

Previous studies have reported that the rate of device-detected subclinical AF is about 10% [2,3]. This study included patients with hypertension and no history of AF, in whom a pacemaker and defibrillator. Recently, we described a higher rate of device-reported subclinical AF (19.6%) [4]. We defined subclinical AF as asymptomatic episodes of AF detected and confirmed by device report and not previously detected by electrocardiographic or ambulatory monitoring. We need to distinguish subclinical AF from atrial high rate episode (AHRE). AHRE was defined as atrial tachyarrhythmia episodes, with frequency >170-190/min and minimum duration of 10-20 successive beats. The numbers of AHRE recorded by device report, more than 90% are in fact subclinical AF episodes, being difficult to define atrial tachyarrhythmia manifestations (atrial flutter, atrial tachycardia). If possible, we try to check the report device and we distinguish subclinical AF from AHRE. We enrolled only patients with CRT-D, and all patients had a low Ejection Fraction (EF). Furthermore, the follow-up period in our study was long. Therefore, it is likely that we found more AF in our study due to the population studied or the duration of follow-up. The detection of subclinical AF was about 10%-20%, these results exceeded our expectations. Figure 1 showed the cumulative rate of AF. The cumulative rate was 49% in all AF, 29% in clinical AF and 19% in subclinical AF for 50 months. Most of clinical AF was detected within a one year. While subclinical AF gradually increased every year. Subclinical AF might be late to detect AF due to without symptoms. Early detect and treatment for AF is very important to us. Home monitoring system might be helpful to early detection of subclinical AF. 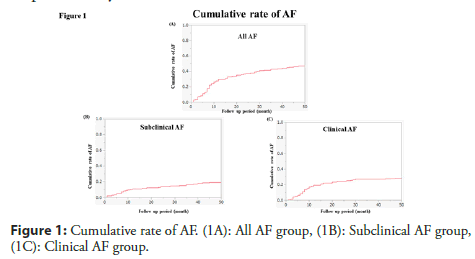 Mechanism of HF Hospitalization in Patients with Subclinical AF

However, Further studies will be required to be certain the relationship between S-AF and HF hospitalization.

The authors declare that there is no conflict of interest.