Aim: We assessed the wire behavior by using intravascular ultrasound when knuckle wire technique is performed for chronic total occlusion of the superficial femoral artery. We investigate the relationship between the angiogram and the wire behavior. Methods: This retrospective multicenter study enrolled 48 patients (50 limbs) in whom intravascular ultrasound could be performed successfully after knuckle wire technique. Results: The wire passed intraluminally from the proximal cap to the reentry site in nine cases (18%). Once the wire entered the subintimal space, it remained in the subintimal space through the occlusion (32/34 cases; 95%). Conclusion: The wire was more likely to advance intraluminally if the chronic total occlusion had a tapered proximal cap and an abrupt distal margin.

Subintimal angioplasty was first proposed by Bolia in 1989 and has since become popular worldwide as one of the major strategies employed in endovascular therapy (EVT) for superficial femoral artery (SFA)–chronic total occlusion (CTO), currently being adopted by many operators as a first-line strategy [1–4]. One reason why subintimal angioplasty has become so popular is its high technical success rate, ranging from 74 to 92% [5–8]. Another reason is that the wire can be easily pulled back from the subintimal (extraplaque/ extraluminal) space at the distal end of the CTO by using re-entry devices [9–12]. For the crossing of long total occlusions, some interventionists prefer subintimal approach from the beginning, whereas others will start intraluminally, and the interventionists usually guess on how the wire traverses by its behavior during passage. Although it is difficult to determine by angiography whether the wire is located intraluminally at the proximal margin of the CTO, within the CTO and at the distal margin, intravascular ultrasound (IVUS) may be helpful for detecting the wire position inside the artery. However, there have been no reports about the use of IVUS to assess the position of the wire during knuckle wire technique for SFA–CTO.

We confirmed the wire behavior whether it is intraluminal or in the subintimal space by using IVUS when knuckle wire technique is performed for CTO of the SFA. We investigated the relationship between the angiogram and the wire behavior, and what type of CTO the wire is likely to advance intraluminally.

This was a prospective multicenter study conducted at four hospitals. A total consecutive 48 patients (50 limbs) with intermittent claudication and/or severe ischemia were identified who underwent EVT for SFA occlusion between July 2007 and October 2008. All patients were enrolled who underwent the knuckle wire technique, with IVUS being performed after wire crossing. The following patients were excluded from this study: patients in Rutherford class 0, patients with in-stent restenosis and patients in whom IVUS was attempted after wire crossing but images could not be obtained. This study was conducted in accordance with the Declaration of Helsinki and informed consents were obtained from all patients enrolled at the time of treatment.

CTO lesions of the SFA were evaluated by duplex ultrasonography, CT angiography and digital subtraction angiography. The method of revascularization, surgical bypass or EVT, was decided by consensus between certified vascular surgeons and interventionists.

All EVT procedures were performed by coronary interventionists. Under local anesthesia, puncture of the ipsilateral or contralateral common femoral artery was done for the antegrade or puncture of the popliteal artery was done for retrograde approach, with the choice of approach depending on the operator. Aspirin (100 mg/day) and clopidogrel (75 mg/day) were administered from at least 7 days prior to EVT and 5000 IU of heparin was injected just before the procedure. A 6-Fr guiding sheath was used. As described previously, the knuckle wire technique was employed using a 0.035-inch J-shaped wire with hydrophilic coating and a balloon catheter or a hydrophilic catheter as a back-up without the re-entry device. After the wire had crossed the lesion, a balloon catheter or a hydrophilic catheter also crossed the lesion following a 0.035-inch J-shaped wire, and then we changed the 0.035-inch wire to 0.014-inch wire or 0.018-inch wire. IVUS was performed to observe the artery, and then balloon dilation or stent implantation (when dissection was detected) was done. Revascularization was defined as successful when the residual stenosis was 30% or less on the postprocedural angiogram and contrast medium flowed freely into the below-the-knee arteries without latency.

In all patients, IVUS was performed with an Eagle Eye® Platinum Catheter (Volcano Corp., CA, USA). IVUS images were obtained from more than 5 mm distal to more than 5 mm proximal to the lesion as the IVUS catheter was pulled back automatically (pulled back speed: 1 mm/s, R100 Pullback Device, Volcano Corp.). The images obtained at three sites (at the proximal cap, within the CTO, and at the distal margin) were observed to determine whether the guidewire was positioned in the intraluminal (intraplaque) space or in the subintimal (extraplaque/extraluminal) space. The term ‘intraluminal’ was defined as the wire and the IVUS transducer being located inside the internal elastic lamina or inside the media. Also, the term ‘subintimal’ literally has the same meaning as ‘extraluminal’ or ‘extraplaque’, and ‘subintimal’ was defined as a state in which the IVUS transducer was located outside of external elastic lamina. The IVUS images were analyzed by at least two certified physicians. On IVUS images and angiograms, the ‘proximal’ and ‘distal’ of CTO were dependent on the approach site, proximal lesion is the near side of puncture site. If a lesion was performed knuckle wire technique retrogradely via popliteal artery, CTO of popliteal side is a proximal and CFA side is a distal side. Lesion proximal is always the near side of a puncture site. The ‘tapered type’ and ‘abrupt type’ of CTO were shown in Figures 1 & 2, respectively.

Figure 1: Examples of the tapered types are shown.
(A & B) Tapered tip indicating direction of true lumen is categorized as ‘tapered type’. Figure 2: Examples of the abrupt types are shown.
(A & B) Blunt type indicating direction of true lumen is categorized as ‘abrupt type’.

Results are reported as the mean ± standard deviation. The t-test and the χ2 test were used for statistical analyses. A probability (p) value of less than 0.05 was considered to indicate significance. Statistical analysis was performed using the SPSS software (version 11.5; IBM Corporation, NY, USA). 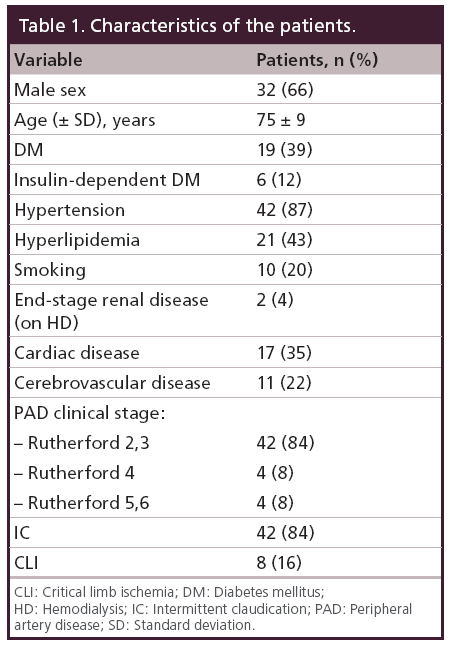 Table 1: Characteristics of the patients. 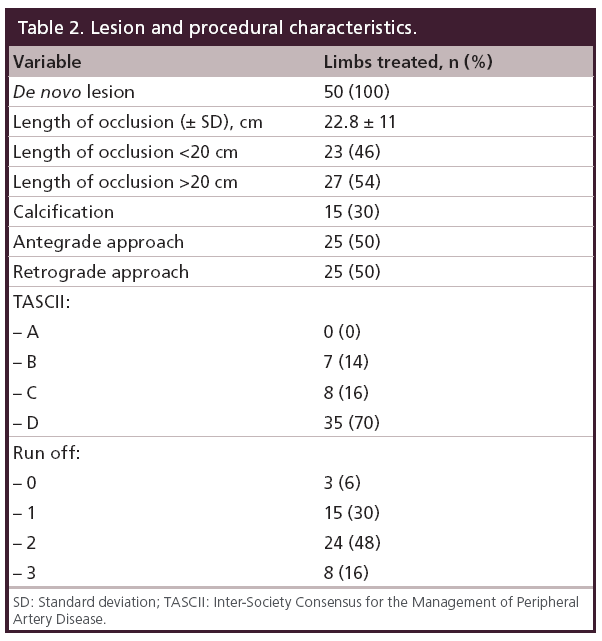 Table 5: Influence of the lesion type.

The wire sometimes passes through the intraluminal space when knuckle wire technique is performed for CTO of the SFA. The wire was more likely to advance intraluminally if the CTO had a tapered proximal cap and an abrupt distal margin.

If the stent was deployed at the subintimal space, the stent needed a strong radial force. If not, the stent was easy to fracture and caused restenosis. Now the stent that we can use does not have a strong radial force. That is why we believe that deploying the stent to intimal space is better and knuckle wire technique should be performed only when the CTO lesion is tapered proximal and abrupt distal. If distal margin is tapered type, we should use re-entry device.

The authors have no relevant affiliations or financial involvement with any organization or entity with a financial interest in or financial conflict with the subject matter or materials discussed in the manuscript. This includes employment, consultancies, honoraria, stock ownership or options, expert testimony, grants or patents received or pending, or royalties. No writing assistance was utilized in the production of this manuscript.

• No one knows the position of the wire during knuckle wire technique for superficial femoral artery–chronic total occlusion.

• The wire was more likely to advance intraluminally if the chronic total occlusion had a tapered proximal cap and an abrupt distal margin.

Papers of special note have been highlighted as: • of interest; •• of considerable interest

•• First manuscript to show the efficacy of subintimal angioplasty. • Shows critical limb ischemia was the only adverse predictor for decreased primary patency. • Showed long-term patency and clinical efficacy and said TASC classification and length of the subintimal angioplasty were of poor predictive value.