Cutting balloon for the treatment of resistant pulmonic valve stenosis

Congenital pulmonic valve stenosis (PS) comprises 7.5–9% of all congenital heart defects [1]. PS was treated in the past by surgical valvotomy. In the early 1950s, Rubio-Alverez et al. attempted the first balloon valvotomy using a urethral catheter and wire to cut open a stenotic pulmonic valve [2,3]. In 1978, Semb et al. attempted to produce a rupture in a stenotic pulmonic valve using a balloon tip angiographic catheter, by pulling it back through the valve [4]. It was only in the early 1980s that Kan et al. used static balloon dilation to relieve PS [5]. It is this method that is currently used worldwide as the treatment of choice for PS.

Balloon valvuloplasty of the pulmonic valve has been shown to be effective and is associated with lower complication rates in comparison with surgical valvotomy at immediate, medium and long-term follow-up [1]. In a small number of cases, failure to dilate occurs with no significant reduction of the pressure gradient across the pulmonic valve. In these cases, the pulmonic valve is usually dysplastic, thickened and forms a funnel. It responds to balloon dilation with apparent complete or near complete disappearance of the waist, but it reappears immediately once the balloon is deflated. If a dysplastic valve fails to dilate, even after upsizing the balloon to 1.4 times the size of the pulmonic annulus, the cardiologist will usually refer the patient for surgical valvotomy or valve replacement.

We decided to attempt to produce a notch or a tear in the valve orifice using a cutting balloon in patients with dysplastic pulmonic valves. We assumed this would create a leading point that could enable subsequent balloon dilation to tear the valve. We present the method and results in a preliminary case series of five patients.

In our center we treated 50 patients with isolated PS using transcatheter pulmonary valvuloplasty between June 2005 and November 2010. Five patients had a dysplastic pulmonic valve that did not respond to standard balloon dilation (Table 1). Three of five patients were diagnosed with the PTPN11 mutation of Noonan’s syndrome; a fourth patient had clinical features compatible with Noonan syndrome, but was negative for the common mutation. The other six known mutations were not tested. The fifth patient did not present with clinical features indicative of Noonan’s syndrome and was not tested.

When a patient in our cohort did not respond to standard balloon dilation, we discussed the cutting balloon technique with the patient’s parents, who signed an informed consent form before we proceeded.

A cutting balloon (Coronary or Peripheral Cutting Balloon Device, Boston Scientific, Natick, MA, USA) that was, if available, larger than the true orifice of the valve as measured by angiography, but smaller than the valve anulus, was selected to avoid disruption of the pulmonic valve anulus. Peripheral cutting balloons are available in 5–8 mm diameter. This is a 2 cm long noncompliant balloon with four metal blades that are attached to the long diameter of the balloon, which covers the blades when folded and uncovers them when inflated. They require a 7 Fr delivery system and are mounted over a 0.018 inch guide wire. The balloon-rated burst pressure is 10 atm.

Statistical analysis was limited due to the small number of cases. Descriptive statistics were performed with Sigma Stat (Systat Software Inc., Chicago, IL, USA). The student’s t test was used for comparing the difference in pressure gradient across the pulmonic valve before and after the procedure. p < 0.05 was considered significant. Graphs were plotted with SigmaPlot® (Systat Software Inc.).

Echocardiogram data are summarized in Table 2 and are shown in Figure 1. 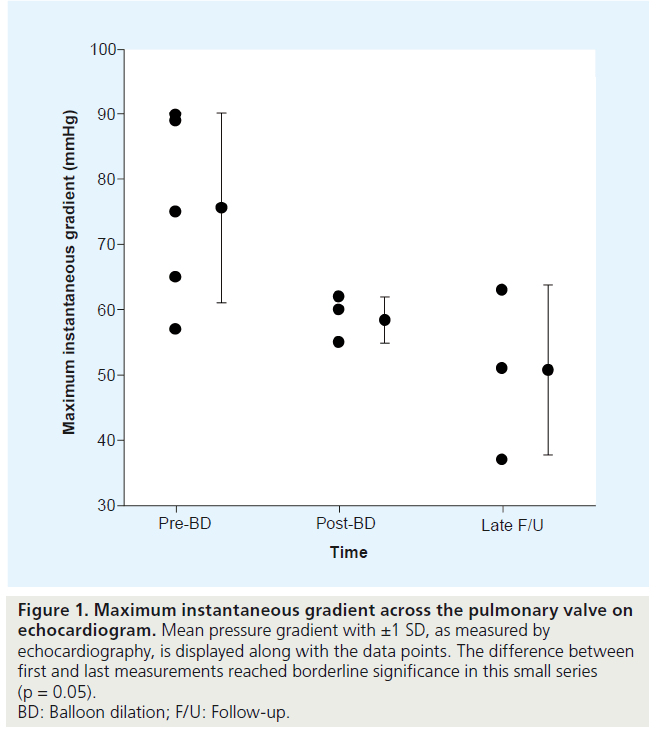 Figure 1: Maximum instantaneous gradient across the pulmonary valve on echocardiogram. Mean pressure gradient with ±1 SD, as measured by echocardiography, is displayed along with the data points. The difference between first and last measurements reached borderline significance in this small series (p = 0.05). BD: Balloon dilation; F/U: Follow-up.

The mean predilatation pressure gradient was 75 ± 15 mmHg. Immediately after dilation, there was an average 23% reduction of pressure across the valve, to 58 ± 4 mmHg (p = 0.05). During long-term follow-up of 5.5 years ± 9 months, the mean pressure was 50 ± 13 mmHg, with no marked variability. The mean change in the maximal instantaneous pressure gradient from before the procedure to last follow-up was 24.9 mmHg. This change reached borderline statistical significance in our small series (p = 0.05).

The catheterization data are summarized in Table 3 and shown in Figure 2. 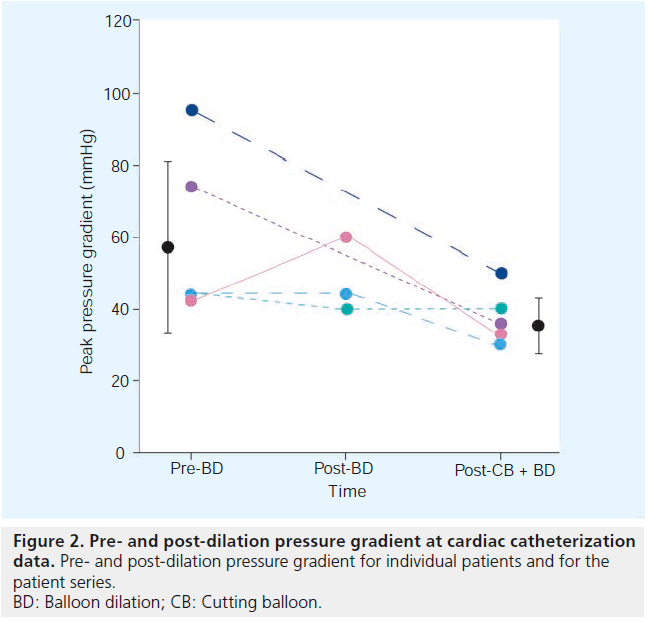 Patients with dysplastic and hypoplastic pulmonic valves have consistently demonstrated a higher risk of unsatisfactory results of transcatheter balloon dilation, an increased risk of restenosis and a higher rate of referral for surgical treatment. Dysplastic pulmonic valve usually has an anular size within the normal range,with valve leaflets that are stretchable and very resistant to balloon dilation.

Transcatheter cutting balloon technology was introduced over 20 years ago for the treatment of peripheral blood vessel stenosis [6]. Since its introduction, this technology has been applied for multiple cardiopulmonary indications, including coronary angioplasty, creatio of atrial septal defects, angioplasty of peripheral pulmonary artery stenosis, angioplasty of aortopulmonary collaterals and dilation of stenotic pulmonary veins [7–12]. In the attempts to treat right ventricle outflow tract obstruction, cutting balloons were used on hypoplastic valves in cases of tetralogy of Fallot, with variable success [13]. In the early 1990s, Yang et al. attempted to open pulmonary valve stenosis by pulling back a double-blade balloon in an animal model and reported three procedures in children, with no follow-up data [14]. To date, we know of no other attempt to use static cutting balloon dilation on dysplastic pulmonic valves.

The rationale for using a cutting balloon for dysplastic pulmonic valve, was to create a small notch or a tear that could serve as a leading point to enable the radial force generated by a subsequent balloon dilation to successfully open the stenotic value.

Potential complications for this technique include disruption of the pulmonic valve anulus, uncontrolled tear in the main pulmonary artery, muscular damage to the right ventricular outflow tract, injury of the tricuspid valve apparatus and leaflets, and damage to the inferior vena cava. We took several precautions to minimize these risks. Fluoroscopic monitoring was used to ensure that the balloon was well positioned in the stenotic valve. To avoid disruption of the pulmonic valve anulus, we elected to use a cutting balloon that was larger than the measured true orifice but smaller than the measured anulus. The cutting blades are folded within the balloon to enable safe advance to the required position; however, they might not be protected by the balloon following inflation and during withdrawal. We therefore advanced and retrieved the balloon through a long sheath to avoid possible damage to the right ventricle outflow tract, tricuspid valve apparatus, inferior vena cava and peripheral veins when pulling the blades back. In the few patients we treated with this method no complication occurred.

Our experience suggests that patients with a high pressure gradient prior to catheterization may have a higher benefit from this procedure. Long-term follow-up showed no marked increase in the pressure gradient across the pulmonary valve, as often occurs in patients with mild pulmonary valve stenosis. Our statistical analysis was limited due to the small number of patients in the series. As a result, the p value reached borderline statistical significance. The three patients who remained in regular follow-up did not need an additional intervention over the last 5.5 years.

It is of note that four of the five patients had clinical features of Noonan’s syndrome, described by Jacqueline Noonan in 1962. The syndrome is relatively common, with estimated prevalence of 1 in 1000–500 live births. Pulmonary valve stenosis is found in up to 40% of cases. Seven causative mutations for the syndrome have been identified, which explain 60% of clinical cases [15]. In our cohort of patients, the most frequent mutation associated with Noonan’s syndrome was found in three of the four patients with clinical suspicion. The fourth patient was negative to this mutation; however, the other six known mutations were not tested.

Our small patient series demonstrates that a cutting balloon may be used safely to partially relieve resistant pulmonary valve stenosis in patients who fail standard balloon dilation. This method could potentially avoid the need for over-sizing the balloon, and thus decrease the risk of significant pulmonic insufficiency after the procedure; it may avoid the need for surgical intervention. A larger patient population and a controlled study are needed to assess the effectiveness and safety of the procedure and validate our findings.

The treatment of PS has changed significantly over recent decades. A disease that was treated surgically is treated almost solely by catheterbased balloon valvuloplasty. The treatment of dysplastic pulmonic valve is less favorable and requires significantly larger balloons (up to 1.4– 1.5-times the measured pulmonary valve annulus), with unsatisfactory results. We believe the use of cutting balloon could potentially address the basic problem of a valve that is resistant to balloon valvuloplasty and facilitates the opening of the dysplastic valves, with no need for surgery or the use of larger caliber balloons that might cause valvular insufficiency. The cutting balloons we use are not designed for the purpose of pulmonic valvuloplasty. However, we foresee that, with the support of a large controlled trial, a more specific set of balloons could be created with low profile, high pressure and larger calibers than are currently available.

The authors wish to thank Shifra Fraifeld for her editorial assistance in the preparation of this manuscript.

▪▪ A small percentage of patients with pulmonic stenosis have dysplastic pulmonic valve.

▪▪ We present a series of five patients with dysplastic pulmonic valve who underwent conventional balloon dilation with no reduction in the pressure gradient across the valve.

▪▪ Three of five patients had Noonan’s syndrome, identified by the most common genetic mutation.

▪▪ Our data demonstrate a significant pressure gradient reduction after the procedure that was maintained over at a mean 5.5 years ± 9 months follow-up.

Papers of special note have been highlighted as:

▪▪ The only reported attempt we found in the literature to use cutting balloon for pulmonic valve stenosis.