Repositioning of old drugs in new indications is a hot topic. However, there are some hurdles to take, and one is related to financial attractiveness. We will discuss two examples to solve this problem based on patents: phenytoin cream for neuropathic pain and amantadine extended release for dyskinesia and other neurological disorders, and discuss amantadine, its history of repositioning and its patents in more detail. Both molecules are respectable old compounds, phenytoin was synthesized more than a century ago, and amantadine in the 50s of last century. Amantadine was first recognized as an antiviral compound in the 60s of last century, and was approved by the FDA for flu prophylaxes in 1966. Parkinson was its first repositioning indication, triggered by a case study in 1968. Subsequently a great variety of indications were explored, from fatigue in multiple sclerosis, enuresis nocturna, ADHD, up to pathological gambling and recovery after head injury. Amantadine is currently developed as an extended release formulation for levodopa-induced dyskinesia in Parkinson’s disease (preapproval phase). It is protected by a patent from 2009, claiming a special formulation and time of intake. While its antiviral mechanism of action has been clarified, the mechanisms of action in other indications are still quite enigmatic. At the end of last century, it was stipulated that amantadine and comparable drugs with unexplained mechanisms may deserve additional studies to enfold its full therapeutic potential. Based on an analysis of the clinical perspectives for amantadine at that time it was felt necessary to developing an infrastructure for funding research on new purposes for older drugs after they lose patent protection. Nearly 2 decades later such recommendation still remains valid.

It is clear that the costs for drug development are increasing due to more and more hurdles to take for the pharmaceutical companies. This leads to high prices of drugs, to be paid by our society. Repositioning of old drugs in new indications is recognized increasingly as a way to provide patients in our society with cheaper therapies [1]. In PubMed, since 2014, more than 200 publications are indexed based on the keywords drug repositioning each year, and that number is increasing (Figure 1). Within that field new approaches are currently explored, for instance drug combination therapy [2]. Clearly drug repositioning can also have tremendous value in the treatment of orphan indications and tropical diseases [3]. It has been emphasized that there need to be installed financial incentives to support drug repositioning efforts [4]. A patent strategy can be one of the ways to make drug repositioning more attractive. We will discuss two examples for such a patent strategy: amantadine extended release and phenytoin topical cream.

Figure 1: publications indexed in PubMed based on the keywords ‘drug repositioning’: a clear increase in publications each year since 2008.

L-adamantanamine (amantadine) is a symmetrical C-10 primary amine with a remarkable cyclic structure (Figure 2), known since the 60s of last century as an antiviral compound, is well absorbed after oral administration and is excreted for more than 90% in unmetabolized form in the urine [5,6]. 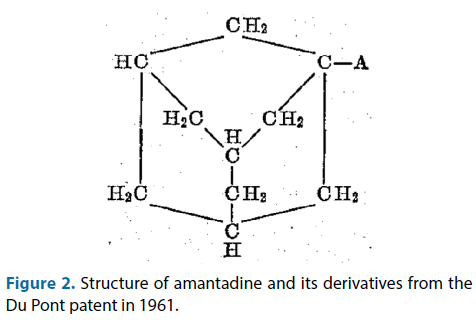 Figure 2: Structure of amantadine and its derivatives from the Du Pont patent in 1961.

The compound and its derivatives were patented in 1961, and introduced under the brand name Symmetrel, by du Pont de Nemours & Co., Inc [7]. The FDA approval for flu prophylaxis dates from 1966. A new formulation of the drug is currently under development as ADS-5102 by Adamas Pharmaceuticals, and might soon become the first FDA-approved drug for the treatment of levodopa-induced dyskinesia in patients with Parkinson’s disease [8]. In April 2015, the FDA granted orphan drug status to ADS-5102 for this indication.

Amantadine was initially introduced as an antiflu compound, and some of its more recent putative indications are aggression and severe autism in children, delayed ejaculation and walking impairment in multiple sclerosis [10-15]. For the last indication, a special extended release formulation has been tested. Other new formulations of this old drug are underway [16].

Its first main repositioning from an anti-flu compound to an anti-Parkinson drug was initiated by a case observation in 1968 of a 58-year-old woman with moderately severe Parkinson’s disease. This patient told the treating neurologist that while talking amantadine hydrochloride 100 mg tablets to prevent the flu, she experienced a remarkable remission in her symptoms of rigidity, tremor, and akinesia [17]. Although the compound is hydrophilic it easily penetrates the blood-brain barrier, due to active transport probably via a proton-coupled organic cation antiporter [18].

Search for amantadine’s mechanisms of action

Clearly, the mechanism of action of amantadine related to the various indications listed in (Table 1) will be quite different, depending on the indication. While the molecular target is clear for its antiviral mechanism of action, it remains quite clouded for the other indications. Based on in vitro experiments the first hypothesis supporting the anti-viral activity of the drug was thought to be a result of the inhibition of the virus by the drug to penetrate into the host cells [35]. Subsequently its anti-viral effect was hypothized to be related to viral uncoating and inhibition of its replication and more recently amantadine was identified as an influenza A M2 proton channel Inhibitor, a clear molecular target [36,37].

In 1970 Grelak et al. suggested amantadine may release dopamine and catecholamines from neurons, based on a number of experiments in dogs [38]. The same hypothesis was supported based on experiments in mice, and the authors suggested that the effects of amantadine in Parkinsonism were triggered by an amphetamine-like mechanism, the release of neuronal catecholamine’s [39].

Goetz in 1998 completed his mechanistic analysis by a number of observations related to the repositioning’s potential of amantadine. He pointed out that amantadine as an old drug providing new lessons to the patient, the practicing neurologist, and the research scientist. Secondly amantadine is a compound that was at that time already approved by the FDA, is inexpensive and devoid of troublesome side effects. He completed his analysis with a clear recommendation related to our topic of repositioning:

“It would be wise to reflect on numerous other agents with unexplained mechanisms that may deserve additional study. Unfortunately, there is rarely support from pharmaceutical companies for investigators interested in working with old drugs, and economic priority for new compounds places such research at a competitive disadvantage. Developing an infrastructure for funding research on older chemicals after they lose patent protection but remain clinically useful is essential for continued research on available drugs. This infrastructure is also necessary to pursue further analysis of their mechanisms of action in the context of advances in molecular and submolecular neurologic function.”

Current repositioning in dyskinesia and walking impairment in MS

ADS-5102 is currently Adamas’ end of phase III owned product candidate and is defined by the company as an extended-release version of amantadine, intended for once daily administration at bedtime. This specific formulation is said by the company to be designed to improve upon the pharmacokinetic (PK) profile of immediate-release amantadine, in order to reach enhanced efficacy with a safe tolerability profile. In pharmacokinetic studies conducted by the company, ADS-5102 was said to induce high plasma levels of amantadine in the early morning that are sustained throughout the afternoon and lower levels in the evening [43]. The company positions this amantadine formulation as ‘chrono-synchronous amantadine therapy’. They submitted a New Drug Application (NDA) for this indication to the U.S. Food and Drug Administration in October 2016. Currently the company also explores ADS- 5102 for repositioning as a treatment of walking impairment in multiple sclerosis (MS) patients and considers developing it for other indications in Parkinson’s disease, post stroke walking impairment, and side effects induced by anti-psychotic drugs, such as tardive dyskinesia, akathesia and weight gain [44].

Finding financial compensation for repositioning of an old drug in a new indication is recognized as a major hurdle to take for developers. One solution not discussed often is via patents.

Adamas Pharmaceuticals, Inc. filed a patent in December 2009 on the methods of nighttime administration of amantadine to reduce sleep disturbances in patient undergoing treatment with amantadine, as well as compositions of extended release amantadine that are suitable for nighttime administration [45]. Clearly a novel combination of the compound amantadine, a new formulation (extended release) and time of intake (before nighttime). The clinical problem solved by the patent was that amantadine therapy administered to a patient shortly before they wish to sleep (e.g., at bedtime) may cause insomnia and sleep disturbance, and the inventors identified a need for a new amantadine therapy which can be taken by the patient before they go to sleep, leading to a suitable plasma concentration of amantadine when they wake up, e.g. in the morning. Basically, the invention solved the clinical problem of side-effects of the immediate release formulation in use. A second aspect of the patent was related to methods of treating other indications, such as brain injury, brain trauma, dementia, Alzheimer’s disease, stroke, Huntington’s disease, ALS, Multiple Sclerosis, neurodegenerative diseases, dementias, cerebrovascular conditions, movement disorders, cranial nerve disorders and neuropsychiatric disorders. The same extended release formulation could be taken in these indications less than about three hours before bedtime. Adamas thus created a patent based on a new formulation, linked to off-label indications.

Our interest in repositioning originated around 2010 when looking for solutions to treat neuropathic pain [46]. In our institute for neuropathic pain we have developed topical creams since that period, containing analgesics and co-analgesics such as ketamine for the treatment of a variety of neuropathic pain syndromes, such as pain in diabetic neuropathy, chemotherapy induced neuropathy, chronic idiopathic axonal neuropathy, CRPS and small fibre neuropathy [47]. We discovered that certain topical formulations support the analgesic efficacy of said analgesics, and unraveled its mechanism of action [48]. Since 2016 we also found that the old anti-epileptic compound phenytoin has a good analgesic effect in patients, among which patients suffering from small fibre neuropathy [49,50].

Phenytoin is already known in the clinic since 80 years! (Figure 3) [51]. we also found that phenytoin can augment the analgesic effects of other (co-)analgesics [52]. This was an augmentation of efficacy, time to onset of efficacy and duration. Drug combination therapy is also currently a hot topic within the field of repositioning [53]. Thus, we concluded that the clinical problem of insufficient therapeutic effects of current analgesics in neuropathic pain in a cohort of patients can be solved by applying topically analgesics in selected formulation, together with phenytoin, and by phenytoin itself. Two patents protect this invention: ‘topical phenytoin for use in the treatment of peripheral neuropathic pain’ and ‘topical pharmaceutical composition containing phenytoin and a (co-)analgesic for the treatment of chronic pain’. 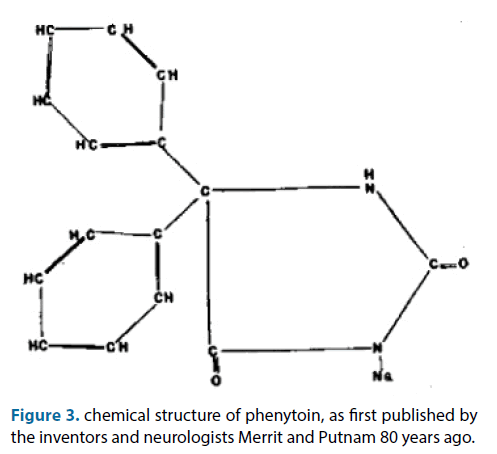 Figure 3: chemical structure of phenytoin, as first published by the inventors and neurologists Merrit and Putnam 80 years ago.

Repositioning of old drugs in off-label indications is a hot topic, increasingly recognized as valuable for our patients and society. One key problem is to create a clear financial incentive for developing old drugs in new formulations. We presented two examples of patent strategies for the repositioning of old drugs in new formulations: amantadine as an extended release in a variety of neurological indications and phenytoin as a topical cream with and without co-analgesics in neuropathic pain.