TSURECOMI technique for bailout after accidental wire withdrawal during TAVI

We herein introduce a case in which our novel “TSURECOMI technique” with snares was successfully performed for bailout of a Sapien, a transcatheter heart valve, when the stiff wire, initially intended for placement in the LV, had accidentally been withdrawn during transcatheter aortic valve implantation.

The Sapien (Edwards Lifesciences Corp., Irvine, CA), a Transcatheter Heart Valve (THV), is the most frequently used THV devices worldwide. During Transcatheter Aortic Valve Implantation (TAVI), the THV is inserted through an expandable sheath by mounting it on a delivery system after a stiff wire is inserted into the LV. If the stiff wire is accidentally withdrawn (Figure 1), how would you resolve this problem? An issue of capital importance is that once the THV has been placed in a patient’s body and removed from the body, it cannot be reused. We resolved this problem-without reusing the THV-by using the novel TSURECOMI technique. Here, we explain the process of the novel bailout technique used. First, we attempted to recross a soft/straight wire through the aortic valve by taking advantage of the flexibility of the tip of the delivery system. Fortunately, we could cross a soft and straight wire into the LV, but as expected, the wire was too soft to insert even the tip of the delivery system. The force vector seemed to be directed toward the outer side of the aortic curve. Therefore, we attempted to switch the force vector to the inner side of the aortic curve using the lasso technique with snares (Figure 2, Video 1) [1]. However, this approach was unsuccessful. For this procedure, a stiff wire was inserted into the LV through the other femoral site. Next, we inserted an INDY Over-The-Wire (OTW) snare (Cook Medical Japan G.K., Tokyo, Japan) using the stiff wire. An important feature of this technique is the type of snare should be “over-the-wire”. This type pf snare can “catch and push” a target object, while the most common type of snare can only “catch and pull”. This type of snare has a so-called “rail” in its posterior and anterior directions and thus, it can catch and push the THV into the LV.

We advanced the over-the-wire snare to the LV by firmly grasping the delivery system and we finally successfully inserted it into the aortic annulus. We then advanced another stiff wire (that had been incorporated in the delivery system beforehand) into the LV and inserted a pigtail catheter after withdrawing the snare and stiff wire from the body. After performing these procedures, we could safely deploy the THV in the usual manner (Figure 3). Figure 3: Ineffective lasso technique in transcatheter aortic valve replacement. Note: The force vector was directed toward the inner side and not the outer side of the aortic curve using the Lasso technique. The force vector of the downward plus the rightward yellow arrows is equal to that of the red arrow.

(2) Insert a soft/straight wire into the LV and cross a 4-F catheter through the 8-F sheath, and then exchange the wire for a stiff J-tip wire

(4) Catch the tip of the delivery system with the snare

(5) Advance the snare to the LV, while firmly attaching it to the delivery system.

During the process, this technique presents a scene as if the snare catches and takes the delivery system to the LV (Figure 4). 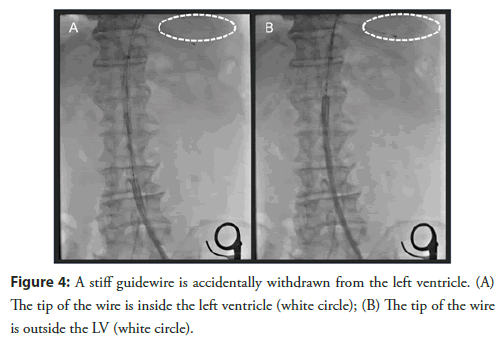 If a guidewire is accidently withdrawn from the LV while inserting a THV, we may be able to catch the wire with a snare using either the transapical or transseptal approach of the BrockenBrough method [3,4]. However, both of these techniques are invasive and require a significant level of experience. The simplest solution to this problem is to withdraw the Sapien from the body with an e-sheath. However, if this procedure is performed, vascular injury at the femoral site is of great concern. Furthermore, another THV, which is extremely expensive, should be prepared because the removed THV cannot be reused.

Our solution to this challenge was to use the TSURECOMI technique with an over-the-wire snare. This technique is neither invasive nor expensive, and can be safely and easily performed by less experienced interventional cardiologists or cardiac surgeons.

Furthermore, this technique may be used in cases where the deployment of a second valve is required to replace a self-expandable TAVI valve that accidentally popped up, or when replacement of a deteriorated TAVI valve with a new one is required. Our TSURECOMI technique is very useful for the bailout of the most commonly used THV during TAVI in cases where a guidewire is accidentally withdrawn from the LV.