Diabetes is becoming a major growing medical problem worldwide. It is a chronic progressive metabolic disease characterizes by high levels of blood sugar. It’s caused by a defect in insulin production by the pancreas or due to tissue insulin resistance or both. Diabetes is one of the most important causes of blindness, kidney failure, cardiovascular disease, limb amputation and death. Diabetes prevalence has doubled since 1980. It has risen from 4.7% in 1980 to 8.5% in 2014 with the Eastern Mediterranean region having the highest prevalence 13.7 % [1]. In 2015, the estimated number of people with diabetes worldwide is 415 million and it’s estimated to rise to 642 million in 2040 [2]. In the Middle East and North Africa (MENA) region, the prevalence of diabetes is estimated to be 35.4 million people (9.1% of adults aged 20-79) over 40.6% of these are undiagnosed. This prevalence expected to rise to 11.4% in the MINA region by 2040 [2]. In our Country, Bahrain, one of the countries of MENA region, the prevalence of diabetes is 14.3% (253 cases) in the age group 20-64 years in 2007 [3]. Bahrain is reported by the IDF to be the third in MENA region after Saudi Arabia and Kuwait in the prevalence of Diabetes in 2014. In 2015, the IDF reported data about diabetes in Bahrain: 154,300 million adults with diabetes, with 800 adults with diabetes related deaths [4]. Diabetes and its complications are causing a growing burden on the individual, their family and their society. It has a high burden on the health cost and on wellbeing and mortality. In 2015, Diabetes caused 5 million deaths, which is the highest compared to mortality caused by HIV, TB, and malaria: 1.5, 1.5, and 0.6 million respectively [2].

Teaching patients the proper injecting insulin technique is vital for health care professionals to preserve correct dose, safety practice of administering insulin. Insulin injection emphasized sterilization technique previously [5], however the antiseptic utility of quickly swabbing the site of insulin injection with alcohol has been refuted [6,7]. The ADA statement on insulin administration neither directly advocates nor condemns the use of alcohol swabs, but it recommends that if it’s used the patient should wait till it evaporates before injection of insulin [8]. Cellulites, inflammation and other local complications among diabetes patients can occur. Health care providers should examine the sites of insulin injecting during their clinic visits. Patients should also be advised to rotate the injection sites to prevent the local complications [8]. Sometimes when the patients outside in public or at work were its difficult to find a private place to unclothe and inject the insulin, they will inject insulin through their clothes in which they found it more convenient, more time saving and less embarrassing. In 1997, Fleming et al provide convincing evidence that injecting insulin through clothing is more convenient and shows no higher risk of skin infection or skin reactions, so removing an important barrier to attain diabetic control [9].

Data collection was done during the period from June 21; through July 30th 2016. Patient identity was kept confidential at all times. The questionnaire distributed to the participants was formed by the survey monkey.

Patients were not placed at any risk by the study; therapy decisions were not based on the study, and no financial compensation was offered for participation. Ethics committee approval was nevertheless obtained.

Table 1: The demographic data of the study participants

Table 2: Percentage of complications among patients injecting insulin through clothing

Figure 1 is showing the reasons which was reported by the participants behind their practice of injecting through clothing. Majority of them reported that they were in emergency situations (17%) or feeling embarrassed at work places (12%). 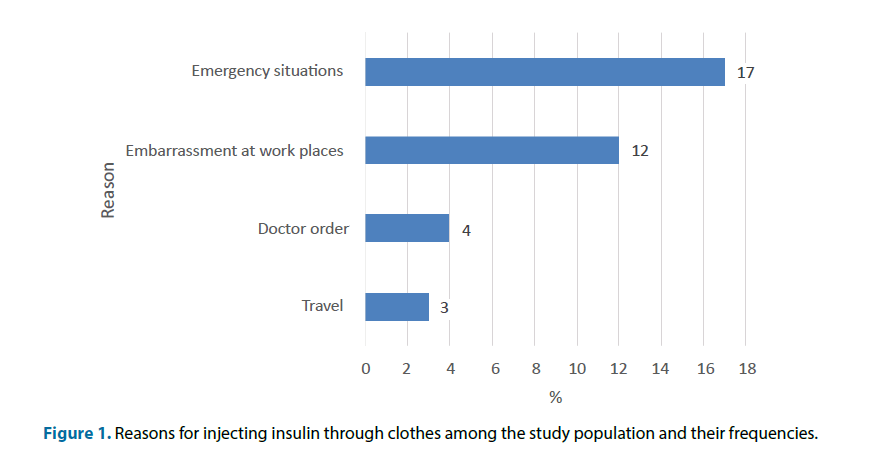 Figure 1: Reasons for injecting insulin through clothes among the study population and their frequencies.

In our study, the percentage of patients with diabetes practicing injecting insulin through clothing was 30% from the participants while the majorities were not. The Insulin Injection Questionnaire (ITQ) survey was conducted among 13,289 patients from 42 countries worldwide which were about the injecting practice of insulin from February, 2014 until June, 2015. ITQ survey revealed only 8% of the enrolled patient’s injected insulin through clothing, which is, much less than the percentage from our study in Bahrain [9]. Furthermore, the majority (28%) of those injecting insulin through clothing, didn’t develop any difficulty in injecting technique, local complications or hyperglycemia. Our data showed that erythema is the most frequent encountered local injection site complication if insulin is injected through clothing which was reported by 9% of the participants. On the other hand, pus was the least encountered one which occurred in only 1%. Only 1% needed surgical intervention while the remaining needed local ointments (15%), systemic antibiotics (4%). However, a single- blinded prospective study conducted in America in 1994-1995 about the safety of injecting insulin through clothing revealed that none of the enrolled subjects experienced erythema, induration or abscess at injection sites nor changes in glycemic control, but only bruises and blood stains on clothing were reported during the injection-through-clothing phase of the study [9]. Furthermore, our research explored the reasons behind injecting insulin through clothing, including traveling, following doctor order or feeling embarrassed in work places and these account for 3%, 4% and 12% respectively. These reasons were almost similar to those in a study published in America, where it was determined by the open-ended comments that subjects found that injection though-clothing technique convenient especially when they are away from home, particularly at work and in restaurants [9]. The importance of skin disinfecting before insulin injection has been disputed for many years ago. Since most insulin preparation has bacteriostatic additives which inhibit the growth of any bacteria and insulin injection is primary done at home not in hospitals where virulent organisms are not common. Current guidelines for insulin injection do not make reference to injecting insulin through clothing as an option [9].

The practice of insulin injection-through clothing is not uncommon among patients with diabetes followed up in the hospital. Patients with diabetes are hampered by injection of insulin and exposing their bodies outside their homes and in public. It is a fast technique and convenient for the patients in special situations, however it’s difficult to judge the safety of Insulin injecting through clothing by only our study’s results. There are some limitations in our study. The number of population involved is small.