Aminoglycosides are highly potent, broadspectrum antibiotics with many desirable properties used for the treatment of lifethreatening infections [1]. Aminoglycosides are the most frequently prescribed antimicrobial agents in Saudi Arabia; they have been definitively established for the treatment of gram-negative bacillary infections. Aminoglycosides include many different agents such as gentamicin, tobramycin, amikacin, streptomycin, neomycin, and paromomycin; gentamicin, tobramycin, and amikacin are the most frequently prescribed. Aminoglycosides act primarily by binding to the aminoacyl site of the 16S ribosomal RNA within the 30S ribosomal subunit, leading to misreading of the genetic code and inhibition of translocation [2,3]. Aminoglycosides initially penetrate the organism by disrupting the magnesium and calcium bridges between lipopolysaccharide moieties. They are then transported across the cytoplasmic membrane in an energy-dependent manner. This step can be inhibited in vitro by divalent cations, increased osmolality, acidic pH, and an anaerobic environment [3]. Aminoglycoside resistance can occur through the acquisition or upregulation of genes that encode inactivating enzymes or efflux systems. Bacterial production of inactivating enzymes is the most common aminoglycoside resistance mechanism in gram-negative organisms [3]; resistance is due to the inactivation of aminoglycoside modifying enzymes (AMEs; aminoglycoside phosphotransferases, acetyl-transferases, and nucleotidyl-transferases) by the products of genes in plasmids or transposons. For example, the enzyme encoded by the rmtA gene has been associated with high-level resistance against all parenteral aminoglycosides currently in use [4,5]. The emergence of resistant strains has somewhat reduced the potential of aminoglycosides in empiric therapies [6]. Multidrug-resistant Pseudomonas aeruginosa have been emerging worldwide. The most common aminoglycosidemodifying enzyme gene types in P. aeruginosa are aac(6’)-I, aac(6’)-II, ant(2’’)-I, and aph(3’)- [7,8] and their substrates are the most important antipseudomonal aminoglycosides [9]. To date, no studies have been conducted in Saudi Arabia to determine which genes confer resistance to aminoglycosides in P. aeruginosa. This study aimed to detect the resistance patterns against different aminoglycoside antibiotics and the prevalence of the genes encoding for resistance in P. aeruginosa isolates from Makkah hospitals.

This study involved the use of previously collected P. aeruginosa isolates by the authors and published [10] from Hera General Hospital (HGH)-Makkah; 263 beds). A total of 65 non-duplicated P. aeruginosa clinical isolates were identified from HGH. The frequency of isolates according to the wards as follows; male ward (n=13) female ward (n=10), Intensive care unit (n=11), surgery ward (n=10), obstetrics and Gynaecology (n=7), newborn intensive care unit (n=4), nursery (n=5) and pediatrics (n=3). The frequencies of isolates were: abscess (n=20), axillary (n=11), high vaginal swabs (n=10), pleural fluid (n=5), pus swab (n=8) and sputum sample (n=9). The study was approved by Ethics Committee in The Custodian of the Two Holy Mosques Institute for Hajj and Umrah, Umm Al-Qura University and a written informed consent has been taken from the subjects participating in the study.

DNA was prepared by guanidinium thiocyanate extraction, as previously described [12]. Two bacterial colonies (3 mm in diameter) were collected from the nutrient agar plates and dispersed in 100 mL of 10 mM Tris-HCl (pH 8.0) and 1 mM EDTA. The cells were lysed with 500 mL GES reagent [5 M guanidinium thiocyanate (Sigma, city,state (abbrev), country), 0.1 M EDTA, and 0.5% (w/v) sarcosyl (Sigma)]. Following the addition of 250 mL 7.5 M ammonium acetate, the suspension was kept on ice for 10 minutes. For deproteination, 500 mL chloroform:isoamyl alcohol (24:1) was added and the mixture was centrifuged at 13,000 g for 10 minutes. The DNA was precipitated from the upper phase with 100% ethanol at -20°C for 1 hour. The extracted DNA was used as a template for PCR amplification.

Table 2: Primers used in the study. 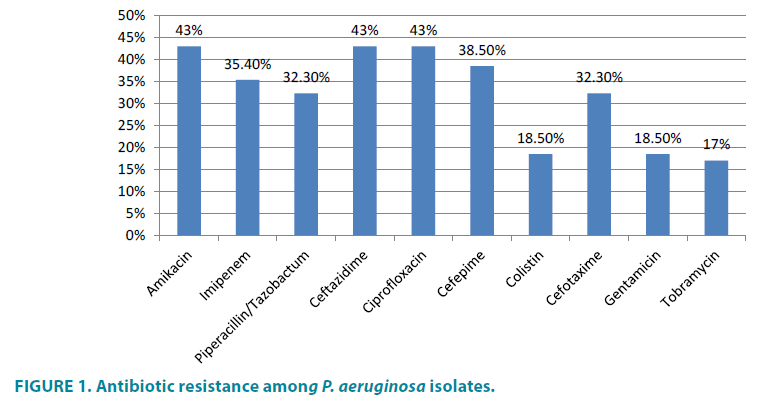 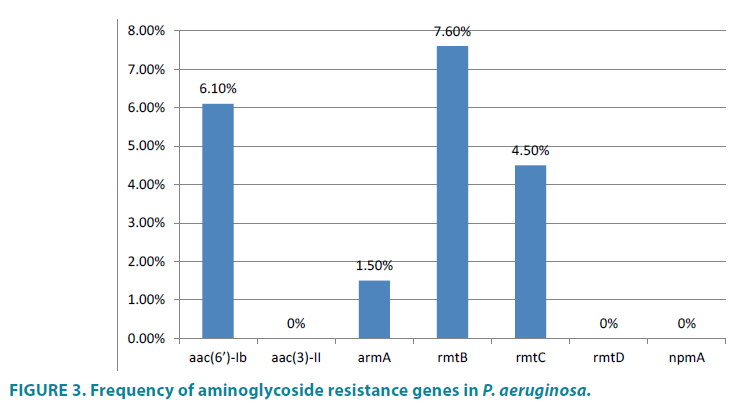 Aminoglycosides are broad-spectrum antibiotics of high potency that have been traditionally used for the treatment of serious gram-negative bacteria such as Pseudomonas infections [13]. Aminoglycosides act by inhibiting protein synthesis via binding to the 16S rRNA and by disrupting bacterial cell membrane integrity [14]. P. aeruginosa is one of the most prevalent hospital acquired pathogens associated with higher mortality rates and antibiotic costs. In the present study, a total of 65 non-duplicated P. aeruginosa clinical isolates were identified in a tertiary hospital in Makkah. Treatment of P. aeruginosa is complicated by its ability to develop resistance to multiple classes of antibacterial agents, even during the course of infection treatment. In the present study, the antimicrobial susceptibility of P. aeruginosa strains isolated from HGH was tested. The resistance profiles showed that 46.1% were resistant to one or more antibiotics and 43% were resistant to amikacin, ciprofloxacin, and ceftazidime, as well as imipenem (35.4%), and piperacillin-tazobactam (32.3%). In addition, 18.5% and 17.0% of the isolates were resistant to the aminoglycosides gentamicin and tobramycin, respectively. In this study, P. aeruginosa exhibited 43% resistance against ciprofloxacin, which is in agreement with other studies [15-18]. Resistance to fluoroquinolones is most likely due to mutation as the result of selective pressure created by the use of fluoroquinolones [19].

Carbapenems are often used as a lastresort treatment for Pseudomonas infections. Resistance to imipenems was shown to be 35.4%. This result is in accordance with a other reports [20,21].

The authors are grateful to The Custodian of the Two Holy Mosques Institute for Hajj and Umrah, Umm Al-Qura University, Makkah, Saudi Arabia., for supporting this study.